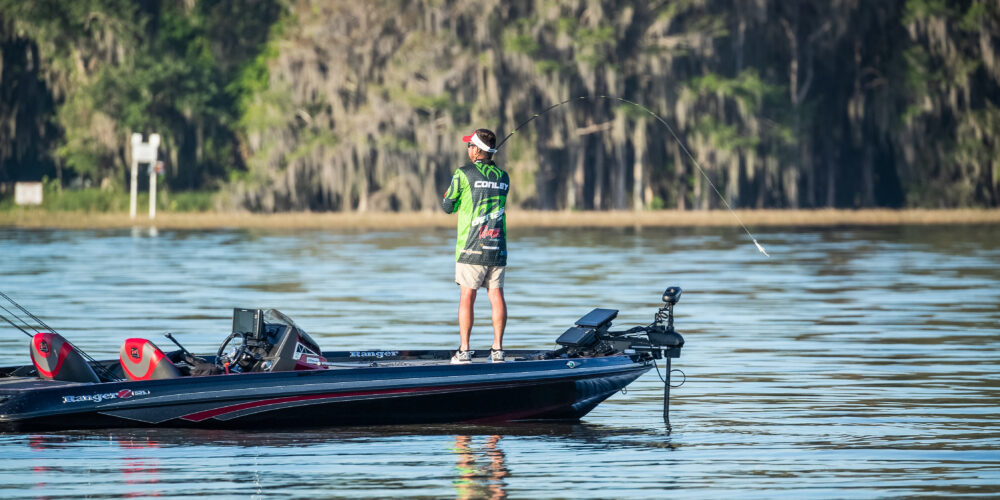 While Jordan Thompkins is running away with Toyota Series presented by A.R.E. Southern Division event on the Harris Chain at the top of the leaderboard, below him are four anglers who represent a snap shot of what’s happening on the chain this week.

No one lake or pattern is dominating. Offshore fishing seems to be the main groove, but whether those offshore fish are truly postspawn or still in a spawning stage depends on the angler who is catching them.

Here is better look at the rest of the top five at the Harris Chain.

Jeffrey Harper has been a model of consistency over the last two days, checking limits of 17-10 and 17-15. Harper’s primary gig has been fishing offshore structures across two different lakes.

“I’ve got about 15 or 16 structure spots I’m rotating on, but of those only five or six spots have been golden,” he says.  “For some reason the same ones keep replenishing with new fish. I’m using the Lowrance ActiveTarget to see fish swimming in and out of this structure. When I see them, I’ll Power-Pole down and cast moving baits to them. I caught a lot of fish on a worm today, but my biggest one came on a [lipless].”

“It seemed like the wind really helped the bite too,” he adds. “We had a lot more wind than yesterday and when it blew the hardest this morning they bit the best.”

Christian Greico is the Lake Apopka representative in the top five. Yesterday he caught 20-3, anchored by a 9-12 giant, and today he followed that up with 13-8 – all from Apopka.

“I’ve basically got one rod on the deck, it’s just standard pitching and flipping,” Greico says. “I’m not targeting anything specific. I just put the trolling motor down, pick a line down through the vegetation and go to work flipping pads and reeds or anything that gets in the way.”

“The fun part is I’m catching a lot of fish,” he adds. “A lot bites and a lot of hooksets, but I just never really got a kicker like I did yesterday.”

Steve Eastman is the top five’s Lake Dora representative. He has spent the last two days catching weights of 18-4 and 15-0 from offshore spots in Dora, some of which are sweetened with fish attractors.

“There are a couple of those attractors that happen to coincide with good bottom contour,” Eastman says. “One of the attractors sits out on the end of a ledge that already has hydrilla and eelgrass on it. That man-made attractor makes the spot even better.”

“While fishing these areas I constantly watch my MEGA 360 to see how the fish are moving in and out,” he adds. “When targeting the attractors, I basically fish soft plastics through them, slowly pulling the lure though the limbs.”

Conley is fishing offshore sand in hydrilla and eelgrass where he believes fish are still spawning.

“I can scan around on these deeper sandbars with LiveScope and see the bass beds up against the eelgrass that lines the bars,” Conley says. “I’m not sight-fishing them directly off the LiveScope, but when I see a fish or two on the beds, I fan cast the area with a ¾-ounce ChatterBait, trying to get them to react to it. It seems like the faster fall of that heavier bait triggers them to bite.”