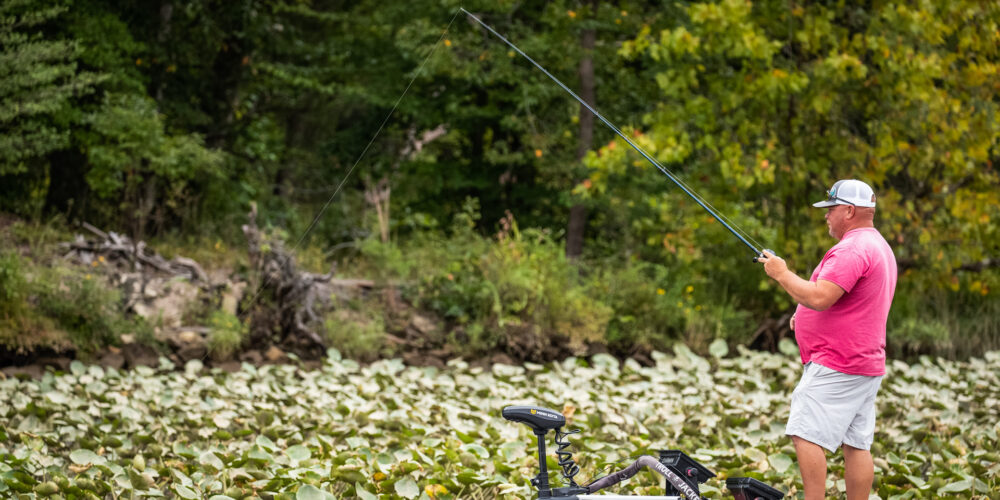 Day 1 of the Toyota Series Presented by A.R.E. Northern Division on the Potomac River offered surprisingly good fishing, which has been a bit of a running theme on the Potomac this year. That said, the actual fishing on Day 1 was really overshadowed by social media comments. With Christopher Sperling towing with a school bus, James Madsen catching fish on an umbrella rig with frogs and Kierran Mooney co-angling with a fly rod, the comedians of the fishing world had plenty of fodder. Still, it’s probably worth digging into the fishing a little bit, because it was pretty solid, and it looks like a fun derby is taking shape.

Leader Aaron Dixon put 17 pounds, 1 ounce on the scale moments after Matt Becker weighed in, but for a minute it looked like the Pennsylvania pro would be the hero of the day. Naturally, Becker didn’t catch any bass in practice and was shocked to find that he could catch any in the tournament.

“I was extremely lucky today,” says Becker. “I started on a spot and was fortunate enough to catch a small limit, and that relaxed me and allowed me to just junk fish around the river the rest of the day and I was able to cull four times with some pretty quality fish.”

Catching his fish on four different baits, with everything from a shaky head to 65-pound-test braid and a big weight in play, Becker says he really junked it together. Though four came from grass, his biggest came off hard cover, and he’s not sure what tomorrow will hold.

“I have no idea how I’ll do tomorrow,” he says. “I didn’t think I could catch a bass today. Going into tomorrow, I don’t know if I learned anything today. Other than my starting spot, I just caught one here and one there. Every decision I made except one where I got really stuck for about 45 minutes was a great decision. Everywhere I went I’d pull up, catch one and cull, and then go somewhere else and cull. It was very fortunate.”

In Becker’s case, a little luck is hardly a bad thing, and if the wheels fall off on Day 2, he’ll likely still come away happy. The Angler of the Year leader heading into the event, Becker took a good lead over Bryan Thrift on Day 1, and barring some extreme flip-flopping in the standings, he looks pretty good to pull out his first Toyota Series Angler of the Year win.

Nick Hatfield entered the tournament with the twin goals of qualifying for the Toyota Series Championship and qualifying for the Tackle Warehouse Pro Circuit. Now, he’s got more immediate concerns, as breaking 15 pounds on Day 1 has him in the thick of things.

“It was a little bit unexpected, but I thought I had a good area found in practice,” says Hatfield, who is a former collegiate standout. “I didn’t really catch many, but I saw the right kind of activity. I really struggled throughout practice, and I thought today would be a lot tougher than it was. I really struggled for the first couple hours, but I ended up putting it together.

“I listened to what the fish wanted, switched up baits, and it clicked all of a sudden. From like 10-2 it was game-on. I culled everything I had initially caught out, and I’ve learned a lot today, so I’m really looking forward to getting back out tomorrow.”

Fishing mostly grass, Hatfield thinks he’s got a bait and retrieve figured out. Dialing that in can go a long way, as we saw this spring when Jacopo Gallelli dominated the final day of the Pro Circuit event.

“The last couple tournaments, including today, it seems like I’ve made good decisions,” Hatfield adds. “I’m just extremely blessed and happy. I love to do this, to see some success, it means the world. I’m feeling pretty good. My main focus is really just this tournament now – I’d really like to win one, or make a Day 3. As far as making the Championship, or possibly the Pro Circuit, I think that’ll come if I just focus on this one.”

Grinding out a limit flipping shallow hard cover, Nolan Gaskin caught the fourth bag over 15 pounds on the day.

“It was tough; it was slow all day,” he says. “I just flipped and pitched all day – every little thing I could see in the water – I was pitching at it and flipping at it.”

Though his area seems to be getting a good bit of pressure, he feels decent about Day 2.

“I think I can do close to the same tomorrow,” Gaskin says. “I left the fish at 11:30, so hopefully I can get something going tomorrow. It’s been so slow. I couldn’t set the hook much in practice. I didn’t have enough fish to do it.”

Catching about 10 keepers on the day, Gaskin is as in his element as can be.

“I grew up fishing in Florida and then I moved to Louisianan about 10 years ago,” he explains. “It’s all about the same – dirty, shallow water. That’s where I like to live. It’s very much comfortable.”

Sitting in a tie for fifth, Virginia local Jason Williams says he fished up north to put his bag together. He also caught a 5-pounder on Day 1, which stood for Big Bass through much of weigh-in.

“I’ve been practicing in this creek up north, and I basically left everything alone until today,” he says. “I got up there and started fishing, and then everybody else just ran over the fish. So, I backed off, left them alone, and then went up there and caught them.”

Williams is doing what one usually does up by D.C.

“I’m just fishing straight hard cover,” he says. “Moving baits like a spinnerbait, mixing it up with a drop-shot, but strictly hard cover. There is nothing in there remotely related to grass.”

Catching only seven keepers on Day 1, Williams was boosted by his big one, but he thinks he’s got a shot to do it again.

“It depends how much traffic I get. If I get a lot of traffic it might be a late grind again,” he says. “But if I get it all to myself, I plan on taking it to the max. I’m blessed. I just applied myself and stuck to my guns and the fish just lined up where they needed to be.”

Handy around shallow grass and tides, Scott Wiley took advantage of a hot morning on Day 1.

“I had an awful practice. I mean, it was terrible,” says Wiley. “I just went fishing today, pulled up on a place I’d caught them on in the past, and I got lucky and caught some on topwater.

“It’s one 75-yard stretch, and I pretty much caught what I weighed in right there. I did go running and culled one time, but it wasn’t what I was looking for.”

Running pretty slim margins and fishing grass around other boats, Wiley knows that Day 2 success is not guaranteed.

“It’s really tough out there. I’ve been in this position before out here, where I caught them really good one day and couldn’t catch them the second day,” he says. “We’ll just have to go out and move around and see what happens.”