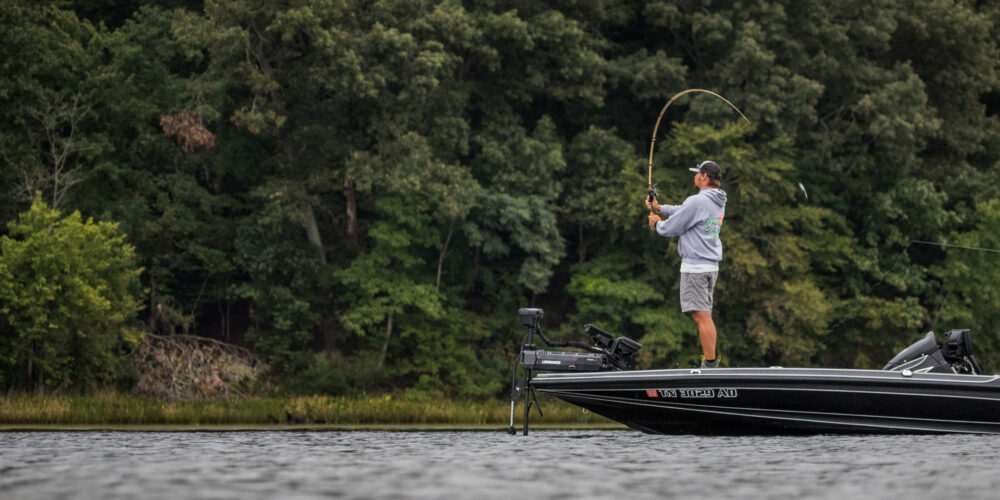 Day 2 of the  Toyota Series Presented by A.R.E. Northern Division event on the Potomac River wasn’t much different from Day 1. Overall, the fishing remained decent, if difficult, and overcast conditions kept topwaters and about whatever else anglers wanted in play throughout the day. If there’s any takeaway so far, it’s that punching looks like the way to go. With Aaron Dixon in the lead by virtue of the big stick, and Thomas Wooten and Matt Becker both catching big ones flipping thick grass, if you want a big bite on the Potomac right now, braid and a big weight is a good way to get it.

Going into the final day, Dixon has a pretty decent lead by Potomac standards, but it’s not insurmountable. A really big bag is possible. Wooten did it today, and the final day always seems to throw some sort of wrench in the works.

Wrangling an even 18 pounds on Day 2, Wooten shot up the leaderboard from 13th to second. A four-time Phoenix Bass Fishing League champ, the Virginia pro won a Regional on the Potomac in 2007 and is looking for another big win.

“I lost two good ones yesterday that would have put me closer to 15,” he says. “Today, I just ran into them. I don’t know if I had the tide just right or what, but it happened today. I leaned on one area a little too hard, hopefully not, but I knew I needed a big bag today to be in contention. I probably culled seven or eight times.”

Punching with a 1 1/2-ounce weight and a Reaction Innovations Sweet Beaver as well as swimming a jig, Wooten says he’s fishing three areas, but did a lot of his damage in one today.

“I feel good about tomorrow. I left a lot of fish,” he says. “I had two blow up on the frog, and I saw the whole fish and they were 4-pounders. This is the only one I was able to fish this year. My son started fishing tournaments with his school. He’s 12 years old this year and I’ve been boat captain for them, so that took up my year. It’s all or nothing tomorrow.”

Tacking on 13-13 on Day 2 to go with 16 pounds from Day 1, Becker kept himself in the hunt and put a bow on the Northern Division Angler of the Year title. Depending on Day 3, he may be able to add to that title with his second Toyota Series win.

“Today was really a struggle,” says Becker, who weighed a few pretty small keepers. “I switched up my rotation. I started on a spot where I thought I could catch some big ones early, and that didn’t pan out. I ended up catching two small ones, and then went to my starting spot from yesterday and finished up a small limit. Then I started junk fishing around the last two hours and was fortunate to catch my two biggest fish.”

Casting with a swimming worm and a swim jig, Becker has caught most of his big fish punching a Googan Baits Bandito Bug with a 1 1/2-ounce weight.

“I really don’t know about tomorrow,” he says. “The one area where I caught my two big ones this afternoon, I feel like I should just go spend all day there and hope to get five of them. But you can fish so much more freely when you get a limit, and I’m not sure I’ll get five doing it.”

Nolan Gaskin is grinding away shallow and in his element by virtue of flipping pads and wood in the back of a creek.

“I’m just flipping the pads, flipping the grass and any bit of wood I get close to,” says Gaskin. “Fishing really slow, that’s all.”

One issued might be that Gaskin miscalculated his weight a bit on Day 2 and left the juice a little early. So, he’s now a little further from a win than he’d like to be.

“It was the same as yesterday: It’s just slow, and I only fished for a few hours because I didn’t want to burn them,” he says. “I thought I had 14. That’s why I quit, and I missed a 5-pounder over there. I don’t have any pressure on me. I can probably do a pretty good bag over there tomorrow. If I get lucky I could have a really good one.”

Dropping from third to fifth, Nick Hatfield adjusted masterfully on Day 1, and had to do it again on Day 2.

“It was a tougher day,” he admits. “I got a couple really good bites right off the bat this morning, and then kinda had to switch baits up a bit. It took all day to catch what I had, really. I weighed in one that was 12 inches that killed my bag. I was catching them on topwater all day, but today I had to throw a [vibrating jig] quite a bit. My two biggest ones still came on topwater, and my co-angler caught a big one on topwater, too.”

Going out tomorrow, Hatfield has locked up a chance to fish in his home state for the Toyota Series Championship and made his first Toyota Series Top 10 along the way.

“It feels great. This is my first Top 10 in the Toyota Series,” Hatfield says. “After practice, if you’d told me I was going to make a Top 10, I would have been super happy. There are some good fish in the area I’m fishing, but since I made it, I might change things up.”