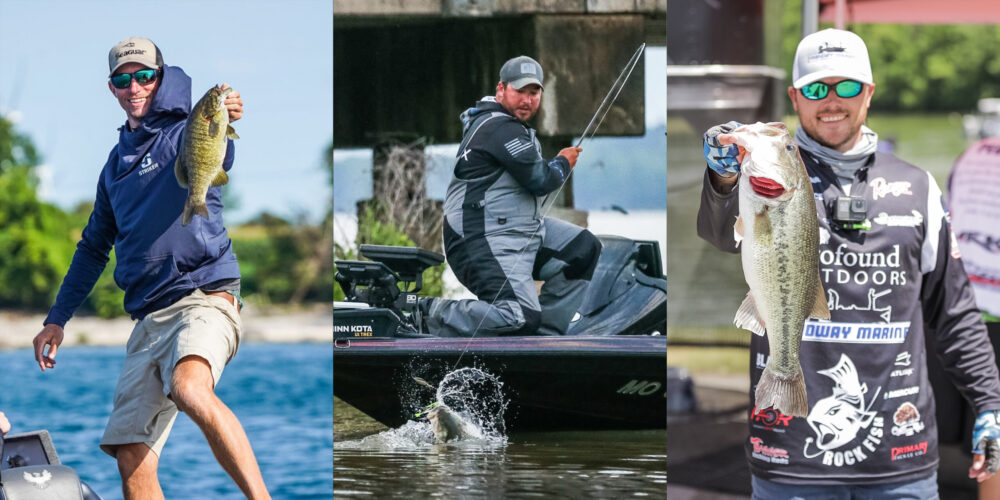 Check out who was tops in each division below.

Taking the top spot in the Central Division, Jimmy Washam put together a great season, with a win on Guntersville, a fourth-place finish at Dale Hollow and a 37th place showing at the season finale on Chickamauga. At the time, his performance in the Central Division was a career highlight, but he shortly eclipsed it with a win in the Tackle Warehouse TITLE on the Mississippi River.

“At that point in time, that was the greatest accomplishment in my fishing career,” Washam said. “Winning the Guntersville event was huge, but to win Angler of the Year against the best anglers in the central part of the country was huge. The fact that I won the TITLE did not take away from how much it means to me to win Angler of the Year. It’s literally the best fishermen on a regional level, it’s a great accomplishment, it’s something I’ll be proud of for a lot of years.”

On the co-angler side, Chris Graham locked up the title with top-fives in the first two events and a 47th place finish in the season finale.

Up north, Tackle Warehouse Pro Circuit pro Matt Becker got the job done with an average finish of eighth over three Toyota Series events, making the Top 10 twice. Becker had three previous Top-10 finishes in the Northern Division standings, but this was his best year yet by a wide margin, even including 2017 when he won at the 1000 Islands.

“So many little things went my way,” Becker said. “Every decision I made in the Toyota Series this year just turned into the right one. Even if I made a bad decision, the next thing I would do was better than I anticipated the first one being. So, every little decision worked out, and I caught a lot of nice fish.

“It feels pretty good, this is my fourth shot at it and I’ve been wanting it since I started fishing these,” said the Pennsylvania pro. “It’s so hard to win Angler of the Year in any trail, but especially the Northern Division, because you have to average a Top-10 finish throughout the three tournaments to win it. I’m very happy with that, it’s been an up and down year on the Pro Circuit – I won an event, but I had a couple of really bad ones and wanted to get some revenge here on the Potomac. So, I got a little revenge and got that Angler of the Year.”

Tops among co-anglers, Sakae Ushio earned a win at the St. Lawrence River, finished seventh at Champlain and 35th at the Potomac. Ushio has fished complete seasons three times and finished fourth in the points in 2018 (with a win on his home pond of Lake Erie) and 16th in 2019.

Andy Newcomb absolutely crushed it in the Plains Division to earn his AOY honor, posting back-to-back-to-back Top-10 finishes, including a win on Grand Lake. What’s even more impressive is that he did it fishing his first full season of a division in the Toyota Series, all while easily accomplishing his goal of qualifying for the Pro Circuit. Newcomb knows it’s no easy feat to achieve and it’s something he’s certainly proud of in his young career.

“The dudes I fish against every weekend are unbelievable,” Newcomb said. “Then you throw in [Fred Roumbains] and Jeff Kriet and all those guys that have been doing it forever and it is pretty special. You’re not just beating anybody. You’re beating some of the very best that have done it, in my opinion.

“This was one of my goals, to win Angler of the Year. I got a little taste of it in the BFLs in 2019. When I decided I was going to fish all of the Plains Division, Angler of the Year was one of my major goals, along with making it to the Pro Circuit. As the year was happening, it never really sank in how it was going. I get so focused on trying to win each event that it wasn’t until the season was over that it sank in and I couldn’t be more thankful, happy and fortunate.”

For the Strike King co-angler side of things, Rob Crane took the top prize by starting and ending the season with a pair of Top 20s and finishing fifth on Grand.

Winning by a tiebreaker, Lance Oligschlaeger edged out Pro Circuit pro Joshua Weaver for AOY, which was settled by total weight throughout the three events. Both Oligschlaeger and Weaver finished inside the Top 20 at Toho and Seminole to start and end the season. The difference-maker for Oligschlaeger, however, was the Top 10 he posted on the Harris Chain by finishing seventh. Because of his season, Oligschlaeger has his sights set to join the Pro Circuit in 2022 and continue to advance his career.

“I don’t even know if you can put it into words once I realized I had won,” Oligschlaeger said. “It never even crossed my mind that it was a possibility, especially [in the Southern Division] because of the stiff competition. I was actually driving home when I got the text that I had won AOY.

“Winning Angler of the Year was always something I thought would be cool, but I never tried to do it. I guess in my younger years it was a goal, but in the past few years when I started back up, I was just happy to be back. It’s just going from one tournament to the next hoping I did good in each tournament. I was just happy with a strong tournament every tournament. But I am pretty happy with how the season went and because of that, I’m going to fish [the Pro Circuit] next year. I passed on the opportunity a few years ago, but this year I felt I needed to do it. If I could win AOY, why should I not fish the Pro Circuit? And I couldn’t find a good reason not to.”

Being that Florida was such a heavy staple on the schedule, it’s no surprise Floridian John Stahl took home the co-angler title. His worst finish came to start the season on Toho where he’d settle 23rd, but from there he’d win on the Harris Chain and take fifth on Seminole to easily secure his first Co-Angler of the Year title.

One of the most dominant anglers in and around Texas for a while, Todd Castledine entered the year with three AOY titles and no immediate plans to chase another – he just wanted to hop in a few events and cash some checks. That changed after two good finishes put him in contention to surpass Cory Johnston and win a record-setting fourth Toyota Series Angler of the Year crown.

“I got Johnston, me and him were tied with three, and I wanted to be the person to win four,” Castledine said. “I had already paid my deposits for all the Bassmaster Opens, when they moved Smith, and it allowed me to fish two of the [Toyota Series events], it was enough for me to forgo my deposit at Pickwick and try for that thing. When I saw I had a chance I went after it.”

In each of his previous AOY seasons, Castledine has had at least two Top 10 finishes. This year, he wrapped it up with a pair of Top 20s and a fourth-place finish.

“It was weird, I didn’t feel like I had this great year like I’ve had before,” Castledine said. “I fished four Toyotas, and I didn’t have a stellar year. But, there’s a reason why I had an ok year and still won it. The conditions were so changing, everyone in the top had an event that wasn’t great, and I didn’t, I had all good events. I’ve won them when I did really good, and other times you just have to not bomb. You cannot have a bad day if you’re trying to win Angler of the Year. I really never had a bad day, I was just pretty consistent, I had good days all the days I was out there.”

Among the co-anglers, Mike Power was tops, and by a good margin. With a Top 10 at Sam Rayburn in April, Power backed it up with a 12th place finish at Lake Texoma and a 24th place showing at the season opener on Rayburn to earn the win.

The best in the west, Phillip Dutra never finished lower than sixth this season to make AOY look easy. This year was his first fishing a full season of Toyota Series competition, and it’s got him headed to the Pro Circuit in 2022.

“I have been fishing tournaments for 18 years on the Cal Delta, and I’ve been wanting to get to this level for probably 10 years, but I haven’t had everything in order,” Dutra said. “2020 was the first full season I fished, this year, I fished three full pro-am circuits on the West Coast, MLF set up really well for me, and two of them were on my home water on the Delta. Havasu I was intimidated by, but this year, I had a phenomenal year, and it’s given me a lot of confidence that I can go do it.”

On the co-angler side, Colby Huntze won the first event on the Delta and never looked back. With a runner-up finish in the second Delta event, he wrapped up the title in style with a 17th place showing at the finale on Havasu.