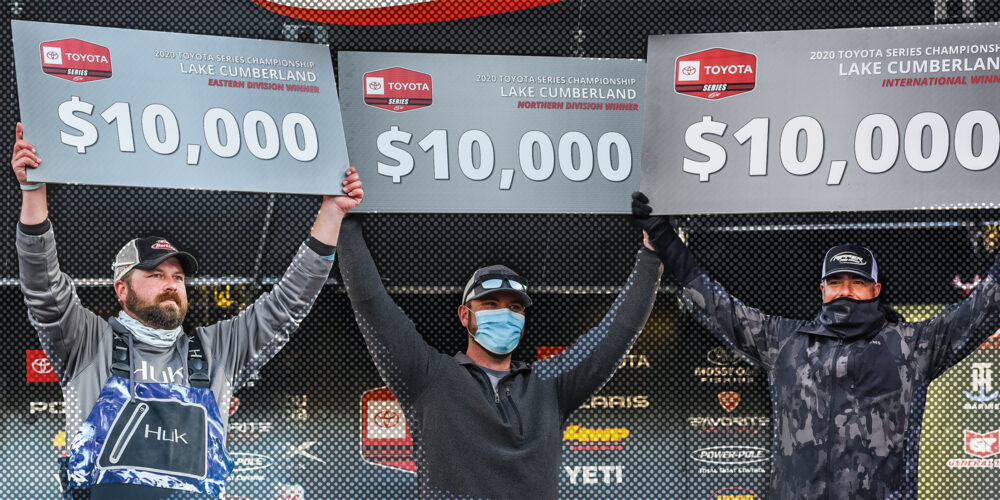 The highest finisher from each division at the Toyota Series Championship takes home an extra $10,000.
January 13, 2021 • MLF • Toyota Series

Fishing for a shot at $200,000 without paying an entry fee is a pretty awesome opportunity that the Toyota Series Championship provides, but winning big money isn’t just reserved for the champion. This past season was the first time that the championship offered a $10,000 bonus to the highest finisher from each division in the event.

So, while there were over 200 pros competing for the top prize, the odds within each division were considerably shorter. The top 25 pros and tournament winners from each division qualified for the event, and once there, the highest finisher in the tournament pocketed a $10,000. Pretty sweet, right?

Obviously, making a top 10 is a pretty good way to add extra money to your pockets. The extreme example would be Toyota Series Championship winner Chris Malone, who scored big time banking $200,000 for the W, plus an extra $35,000 for the Phoenix MLF BIG5 Bonus and $2,500 in Mercury Bonus Bucks. To top it all off, he was the highest finisher from the Central Division, so he got another $10,000 for that. He took home a cool $247,500.

On the flip side, Ricardo Gonzalez placed 160th in the event, yet still won $10,000 for being the highest finisher in the International Division.

The good news is that the $10,000 bonus will be back for the 2021 Toyota Series Championship taking place on Pickwick Lake October 28-30. With six U.S. divisions offered in the Toyota Series this year, plus the International Division, the top 25 pros and tournament winners from each will advance to Pickwick for a shot at the $200,000 title, as well as being eligible for the $10,000 bonus, and an extra $35,000 for qualified Phoenix owners. If you want a shot at winning some big money sign up for a division today. Who knows, maybe you’ll be thankful you did just like the anglers below.

Top finishers from each division in the 2020 Toyota Series Championship:

If you can’t commit to all three tournaments in a division this season, you can qualify by winning any tournament, or advancing through the new Wild Card Division. To qualify in a Wild Card spot, fish four or more tournaments in any combination of divisions and keep your best three events. If you finish the year ranked in the top 12, you’ll be on your way to the championship.