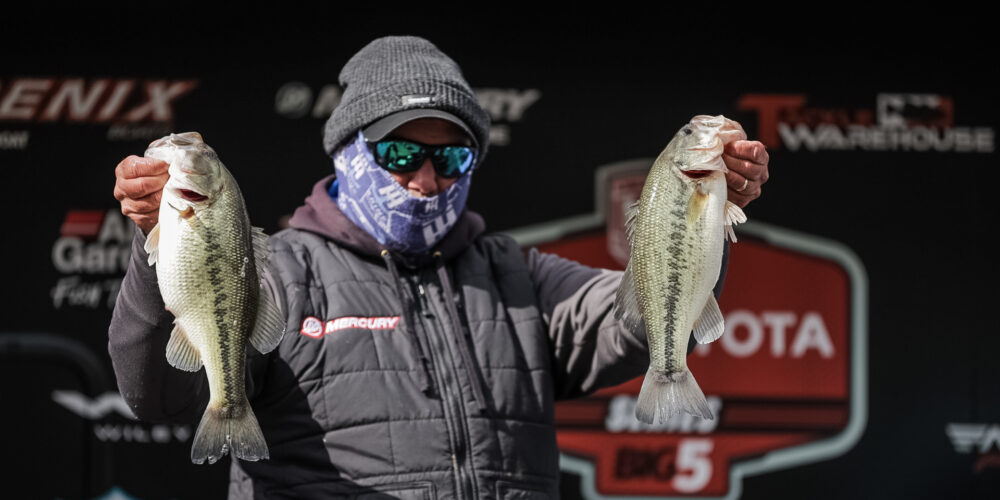 When Adam Wagner weighed just 13 pounds, 2 ounces on Day 2 of the Toyota Series presented by A.R.E. event on Dale Hollow on Thursday, there was an obvious sense of disappointment in his voice. Bumping his total up to 37-1, Wagner weighed with one of the earlier flights of the day, so there was a pretty large field yet to stroll across the stage and potentially unseat him from his Day 1 lead – which he assumed with his largest bag ever on Dale Hollow in the form of a 23-15 bag full of hearty largemouth.

As weigh-in moved along and fewer and fewer large bags hit the scales, the dust settled and cleared away, showing a leaderboard with Wagner’s name still at the top of the list of more than 200 Central Division presented by Neat Companies anglers. And it’s hard to be disappointed in that.

Wagner’s hesitance to get excited about 13-plus pounds is understandable – it’s hard to go from your best day ever on your home fishery to a ho-hum bag amidst ever-changing weather conditions (including a cold front that brought bluebird skies with it). Still, he carries a lead of 5 pounds, 7 ounces into the final day of competition.

If he manages to do that, it’s hard to see anyone overtaking Wagner on Friday. Even catching “all males” as he says he did on Thursday – after catching what he expects were all prespawn females a day prior – it should be enough to keep Wagner out in front unless something totally unexpected happens.

Friday’s forecast is more of the same: highs not even touching 50 degrees and plenty of sunshine. Overnight temperatures in the 20s should stabilize things a bit, but those colder air temperatures could serve to keep fish from moving up shallow to spawn, which is what Wagner believes happened to his fish on Thursday.

“Yesterday, I was catching them in run-ins,” he says, referencing all the areas on Dale Hollow in which rainwater was flowing into the reservoir en masse. “All my bigger bites came out of that kind of stuff where the water was running in as shallow as you can get.

“Today, with the cold, I just couldn’t get bit in that stuff. I had to fish flatter stuff. I fished the same areas, but I had to kind of change it up.”

Wagner says the fish that were up on the banks to spawn to start the week have “pulled out bad,” but that doesn’t mean he’s going to go chasing them. He has too much faith in his program – and it’s hard not to when you manage to weigh in consecutive limits in an especially difficult tournament.

“I’ve got too much confidence in what I’m doing,” he explains. “I might have to move more. I’m fishing down the lake and I may have to come mid-lake and fish a totally different area but … I’ll be ready to run and gun tomorrow.”

The mantra of fishing for five bites might be a little cliché in the professional bass fishing world, but it’s absolutely accurate in this tournament. And if Wagner manages to get five and land five, he’s going to be awfully hard to beat.

Like Wagner, Tim Jolley had a markedly less impressive day on Thursday, though he did more than enough to maintain his lead and set himself up for a win on Friday with a pair of solid keepers for 6-10, bringing his total to 21-10 for the week.

Jolley enters the final day of competition with a 1-pound, 1-ounce lead over Jared Mataczynski – one he hopes he can hold by doing some of the same things he’s done the first two days of the event, including fishing off the bank a little more than most.

“They’re holding out [deeper] for me,” he says. “The big fish are laying out there.”

Still, Jolley notes that the current cold front has prompted his fish to bite a little funny, leading to a trio of potential keepers that came unpinned on Day 2.

“They didn’t want it today,” he adds. “I had three fish wallow and come off, just barely hooked.”

Jolley spent his day with umbrella rig and jerkbait rods in his hands. On Day 1, it was a flipping stick. As for Day 3?

“I’d probably like to be dragging,” he says. “I’d say tomorrow would be a good dragging day. I know there’s a bunch laying out there (off the bank).”