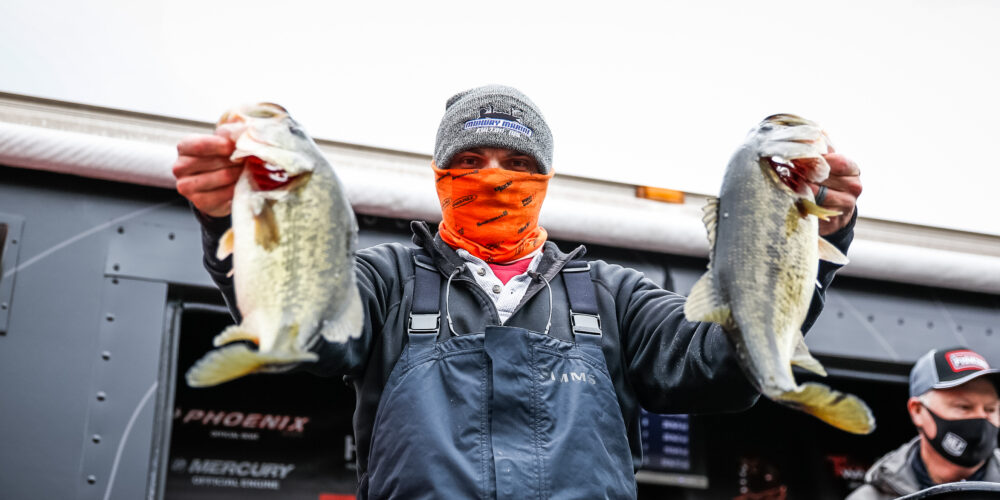 Tackle Warehouse Pro Circuit pro Jimmy Washam didn’t catch as much on Day 2, but he caught enough to hold his lead in the Toyota Series presented by A.R.E. Central Division event on Lake Guntersville. Washam, from Covington, Tenn., caught 15-15 Thursday for a two-day total of 39-6, giving him more than a 5-pound lead over second place angler Sloan Pennington heading into the final day of competition.

Asked if anything changed on Day 2, Washam replied with a grin.

“Yeah, my fish got smaller,” he jokes. “I had to work really hard for what I got today. Of course, I did yesterday, too. I had one good cull late today; I just didn’t have a 7 1/2 (pounder) and a 6. I actually did catch more keepers today.”

Washam says he put at least 11 keepers in the boat on Thursday, along with a couple short fish.

The weather was much milder Thursday, mostly in the high 30s and low 40s with relatively light winds. Friday morning temperatures, however, are expected to fall back into the mid 20s with some northeast wind around 10 mph.

“I actually like the cold weather because yesterday it seemed to congregate the bigger fish in key little areas on these grass flats,” Washam says. “I’m hoping tomorrow that’ll work. Today, they just seemed a lot looser – more spread out.”

Most anglers agree that the extended recent snap of cold weather has significantly hurt the Guntersville bite overall. That shows, with only 46 limits caught by 212 professionals weighing in Thursday. It also shows with three of the top five pros from Day 1 falling far down in the pack after Thursday. Consistency has been hard to come by.

However, based on the last two days, Washam isn’t worried, hoping the colder weather might be good.

“These fish will shock you in this cold weather,” he explains. “The bigger fish seem to like it; the colder the better.”

Washam’s already planning his strategy for the final day, when only the top 10 anglers take to the water.

“About 2:30 I decided I needed to go look at some other stuff, kind of practicing for tomorrow even though I didn’t have much weight,” he admits. “I pulled into an area that looked right – it felt right – and I culled twice right there in the last few minutes.”

Washam says he has two baits working. One of them is a lipless crankbait and the other one he describes as a “typical power fishing lure on Guntersville,” a bladed jig. That’s information Washam was reluctant to share on Wednesday.

“It’s absolutely no secret,” he says with a laugh. “I just wanted to add a little suspense.”

He does say, however, that there is a difference in the times of day fish seem to be keying on the two baits.

A camera boat followed Washam for 30 minutes today and he failed to catch a fish.

“You know, the last four times I’ve had a camera boat on me I’ve caught a fish as soon as the camera boat left,” he quips. “Today, that didn’t work. I had to leave and go to a different place.”

After taking some time today to basically scout for the final day, Washam feels good about his chances to hold on for the wire-to-wire win.

“I’m excited about that, and there’s hopefully some more stuff like that I can duplicate,” he says. “It’s just going to be cover water and let the fish tell you what’s up.”

He credits at least part of his success to the two pros he’s been paired with.

“I had two good guys to fish with,” Newsom says. “They’ve been around fish and I’ve been able to catch a few.”

Newsom says there’s only been one lure he’s used for two solid days.

“I’ve just got one little bait,” he says. “I’m throwing a lipless crankbait, and that’s how I’ve caught all nine of my fish – four yesterday and five today.”

Newsom lives near Pickwick Lake, farther down the Tennessee River, but really not that far from Guntersville. Yet, he’s never been here.

“I live two hours from here and I’ve never fished Guntersville,” he says. “First time ever.”

Tomorrow, Newsom will go up against nine other co-anglers, but says no matter how it winds up, he’ll probably be back to Guntersville someday.