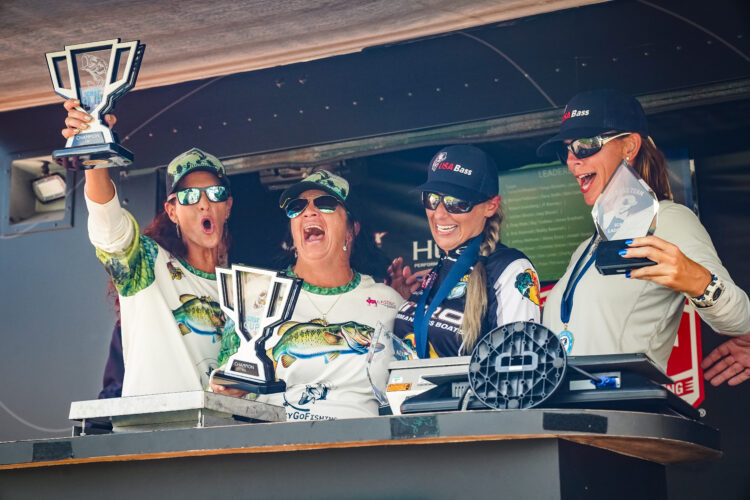 More than 100 anglers competed on Lake Toho Tuesday morning, raising $11,000 for Keep America Fishing while competing for the ICAST Cup trophy. But this time around, there was more at stake than ever for the female anglers in the tournament because the top-finishing women’s team of two qualified for the USA Bass Team.

Close friends Terrie Huffmaster and Tanya Michelle were paired together after each of their original partners for the ICAST Cup fell through.

“It was meant to be, I felt that the stars were aligned and something brought us together. It was amazing,” Michelle said.

Because the women were fishing with a boat captain, they weren’t eligible to qualify for the spot on the USA Bass Team. However, they credit their boat captain, Jackson Williams, with putting them on the winning fish. At the end of the four-hour tournament, the trio weighed in a limit of 25 pounds, 10 ounces.

“I’m just proud for both of us.” Huffmaster said. “I’m humbled. And we busted our butts!”

Huffmaster and Michelle kept it simple, throwing dark-colored Zoom Speed Worms to catch all their fish.

“It was that morning bite that was on fire, on the shell bar,” Michelle said.

While the winning team took advantage of the early morning bite, Michelle Jalaba and Melissa Young didn’t fill out their limit until the final hour of the tournament, which ran from 6:30 to 10:30 a.m. to avoid Florida’s extreme summer heat.

“I was getting frustrated because Michelle caught a bunch of fish and lost a couple big ones, and I hadn’t even had a bite,” Young said.

Jalaba and Young explained that there wasn’t time to run around the lake to change spots since the tournament was only four hours long. But the day turned around when the pair put away the topwater baits and switched to their “confidence bait.”

“All I’ll say is this: It’s nothing that anyone would ever tell you that you should be doing on a southern lake,” Jabala laughed.

Jalaba drove from her home in Michigan to compete on Toho with Young, her long-time friend from Lake County, Florida. They weighed in five fish for 12-7 to earn a spot on the USA Bass Team. Now, the duo will represent the United States in the 2022 Pan American Black Bass Championship alongside Jacob Wheeler, John Cox, Mark Daniels Jr., Dustin Connell, Brian Latimer and other top pros.

“We just had the chills about it. Because it came together at the last minute,” Jalaba said.

As opportunities for female anglers grow in the bass fishing community, all four of these anglers encourage more women to get involved in tournament fishing.

“You’ve got to have a passion for it. If it’s in you, you’ll know it,” Huffmaster said.

Jalaba and Young admit that it can be intimidating for women to get involved in tournament fishing when they’re inexperienced. But they say it’s worth it to step out of the comfort zone, compete in local tournaments, and even reach out to fellow female anglers on social media for advice.

“Every female angler that I’ve ever reached out to has been very supportive and helping and guiding,” Jalaba said.

“You’ve got to put your time on the water. If you’re not out there, and you’re not trying, you’re not going to catch anything. And you learn from making mistakes,” she said.