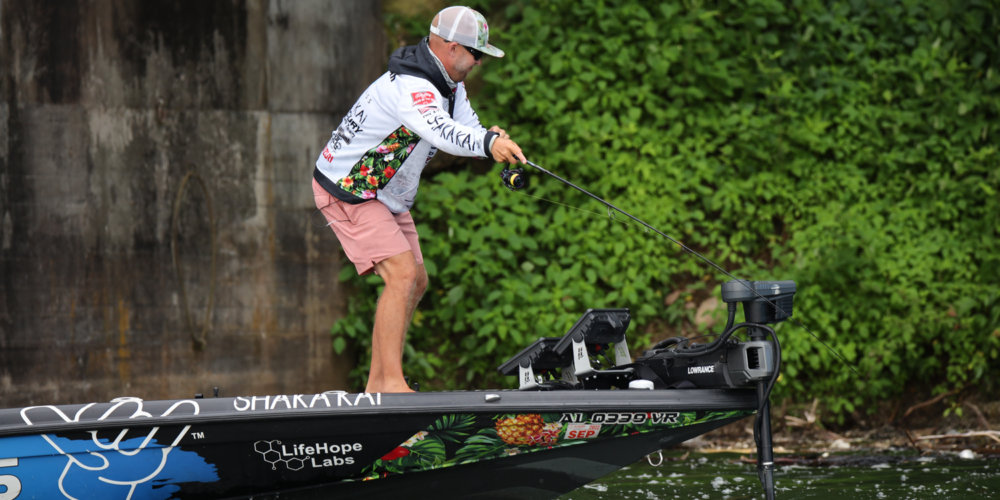 A win at Stage Five was icing on the cake, but Mercury pro Ryan Salzman has more goals in mind to finish out the 2022 Bass Pro Tour season. Photo by Joel Shangle. Angler: Ryan Salzman.
July 11, 2022 • Ryan Salzman • Angler Columns

I had three main goals when I started my first season on the Bass Pro Tour this year. Number one was to requalify for the tour for next season and the other two were to qualify for REDCREST and Heavy Hitters in 2023. To get a win at the last event on Watts Bar was the icing on the cake, and I’m keeping my sights on my other goals as we head down the homestretch of the season.

I believe both points races will come down to the wire at the last two events of the year, which has me extra focused on the northern swing to Cayuga and Mille Lacs.

My First Win and Watching the Points

My outlook on life and fishing is to take things day by day and let things unfold. I believe the wins will come from that approach, and so far, that philosophy has worked out. After my win at Stage Five, I had tons of interviews and calls, and I’m super thankful for all the support. It’s the biggest accomplishment of my career, and I couldn’t be more thankful that it happened so soon in my Bass Pro Tour career.

After five events in my rookie year, I’m sitting 38th in the Bally Bet AOY points standings, and the Top 40 make REDCREST. I’m 23rd on the Heavy Hitters side of things, and only the Top 30 make it. Right now, I’m on the right side of the line for both qualifications, but things can change quickly, and I’ll have to catch them when we head north if I want to realize the goals I set to start the year.

I don’t have much room for error fishing against these guys on the Bass Pro Tour, but I’d love to make both REDCREST and Heavy Hitters on my first try. REDCREST is our biggest event, and Heavy Hitters is the coolest tournament format I’ve ever seen. The focus on big bass and big prize money is really unique and it would be a blast to compete in it – I love the idea of fishing fun stuff like big swimbaits, glide baits, and spoons trying to catch a big one and earn one of the big-bass prizes.

A Great End to the Season

I’m pretty excited about the last two events of the season in New York and Minnesota. Both Cayuga and Mille Lacs should offer great fishing with the chance for both big largemouth and smallmouth, but a lot of it will depend on the weather and lake conditions. I’ll have to drive around when I get there for practice to see what the lakes have to offer and make a game plan for the event.

I’ve never been to Cayuga and didn’t make the trip up to pre-practice, but from what I read about it, it’s a good lake with some big bass. I’ve also heard that a lot of the grass is gone. If that’s true, it will definitely change things and group guys up in the places that still have grass, but you might see some interesting techniques come into play as guys figure out how to catch fish there.

Mille Lacs should be really fun that time of year because the bass should be starting their fall feed. Temperatures could be in the 40s or the 60s when we get there and the weather will definitely play a role in the event. I made a trip to Mille Lacs to pre-practice recently and it was so windy one day that I went golfing instead.

That lake gets rough, and I think the weather will be the wildcard for that event. We’ll see some giant smallmouth get caught and guys who like to fish for largemouth can do that, too. It’s got plenty of both species. I can’t wait to get up there and see how things play out as we wrap up the 2022 season.