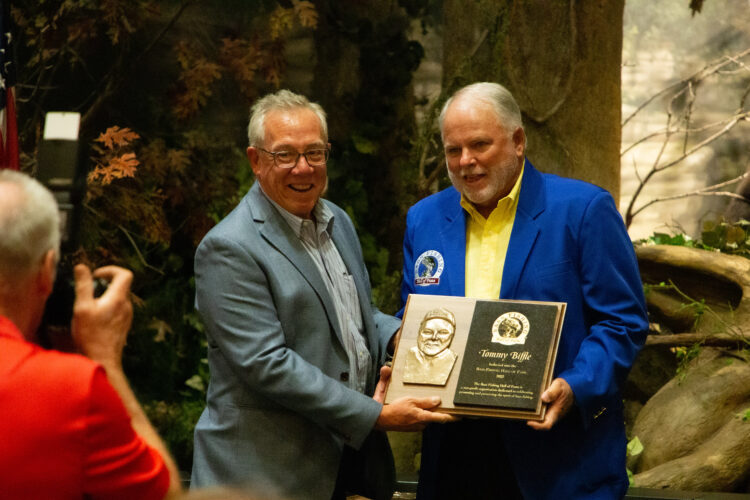 SPRINGFIELD, Mo. – Pro anglers and fishing industry moguls from all over the country traveled to the Bass Pro Shops Headquarters in Springfield on Thursday to celebrate the Bass Fishing Hall of Fame Class of 2022. Oklahoma pro Tommy Biffle and MLF Executive Vice President and General Manager Kathy Fennel were each given an iconic blue blazer and a plaque that recognizes their contributions to the bass fishing industry. The late Aaron Martens was posthumously inducted into the Hall of Fame. Several members of the Martens family attended the celebration, including Aaron’s wife, Lesley, his mother Carol and his children, Jordan and Spencer.

Biffle delivered the first speech of the evening and he kept the entire room rolling with laughter. He joked that he’d rather be throwing a drop-shot than giving a speech in front of a banquet hall full of people, but became emotional when talking about how much a Hall of Fame induction means to him.

“The Bass Fishing Hall of Fame is probably the biggest honor that I’ll ever have,” Biffle said while holding back tears.

The Biffle Bug creator showed appreciation for several people, including Johnny Morris and Ray Scott, and he didn’t forget to thank his “main sponsor,” his wife, Sharron.

When it was time to award the Martens family with Aaron’s Hall of Fame plaque, the crowd watched a tribute video of MLF pros talking about how much they love and respect Aaron as a friend and as a legend of the sport. Much of the crowd teared up while watching Lesley accept Aaron’s plaque from Kevin VamDam.

“What I love most about this sport, this industry, is the people,” Fennell said during her acceptance speech. “Aaron Martens’ life and legacy is a shining example of the brightest and the best. We all miss him.”

Fennell was a key figure in the FLW organization since 1982 and is now one of the most influential people in the fishing industry. As MLF’s executive vice president & general manager, Fennel oversees day-to-day operations, making sure the organization continues to provide prestigious, well-organized tournaments.

“My entire career has been spent working alongside the most dedicated, loyal and hardest-working group of people in the world,” she said. “The only reason I’m standing here today is because of them.”

The Bass Fishing Hall of Fame is located in Johnny Morris’ Wonders of Wildlife Museum in Springfield. You can learn more about the organization here.