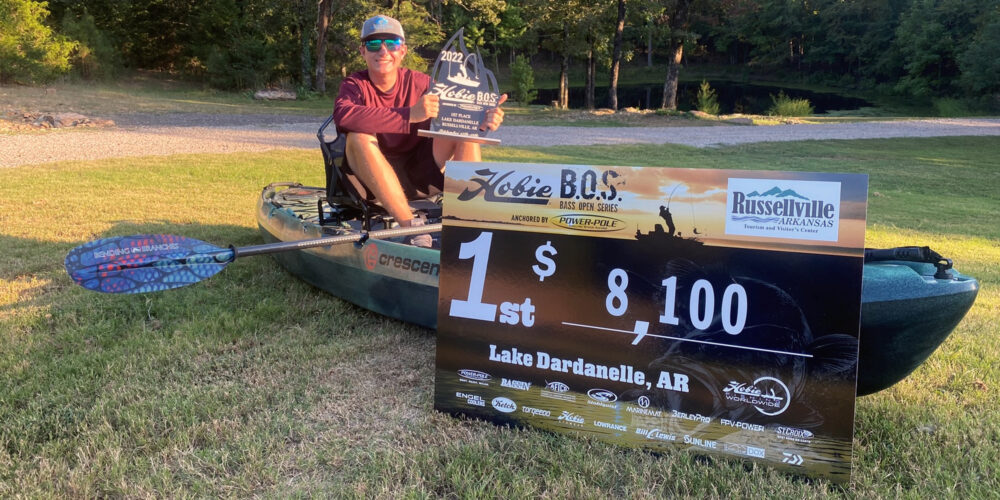 From Bass Boat to Kayak in Two Days

When your dad is a pro and you grow up around the likes of Jordan Lee, Kevin VanDam, Mark Daniels, Jr. and Ott DeFoe, you’re bound to know a little about bass fishing. And Jackson Roumbanis knows bass fishing.

He’s won two AOYs in his youth circuit in Arkansas, with 10 tournament wins to boot.

“You would never know that because this kid is so humble,” Fred said. “His versatility is there, and he’s going to be scary (good) one day. He already is scary.”

But unbeknownst to Fred, who was fishing Mille Lacs at the time for Bally Bet Stage Seven, one of Jackson’s friends in the kayak fishing community had convinced him to compete in the September Hobie Open and offered him a boat to use. Jackson informed his mom, Julie, the Tuesday before the start of the weekend tournament that he needed to pick up a kayak, and he splashed his new boat on Thursday. By Saturday morning, he was competing on Lake Dardanelle.

Jackson had to be confident in the spots he chose to fish, mainly because Fred would have to drop him off in the morning and he had no way to load and unload in different spots around Lake Dardanelle. Luckily for Jackson, Dardanelle is basically his home water.

The first full day on the water didn’t come without its difficulties.

“Oh, it was something else,” Jackson said. “I got out there the first day and tried to fish using the same techniques I would from a bass boat, and realized it was a lot harder. There were new techniques and new things I had to adapt to. I forced myself to be confident in those spots, even though I knew there would be hours where I wouldn’t get a bite.”

Fred believes that Jackson’s patience is his biggest strength as an angler.

“He knows how to wait fish out,” Fred said. “(That’s important) when you can’t turn a key on a boat and go anywhere. All he had was a paddle, an anchor, and four rods.”

There were other obstacles to overcome and mistakes that any rookie could make when competing out of a kayak for the first time.

“About a quarter through the second day, I ran out of the worms I was using,” Jackson said with a laugh.

Not to mention the impact of fishing from a kayak for the first time – for seven hours a day – can have on the body.

“I was so exhausted,” Jackson admits. “I was extremely sore, and my legs were jelly.”

Although Fred couldn’t stay to watch full competition days, he paid close attention to the areas that Jackson chose to fish both days of the tournament … until he felt he was making him nervous.

“I raced home to turn on the scoreboard, and was like, ‘Whoa, he really is catching them!’,” Fred said.

Down to the Tiebreaker

Following two days of fishing where he racked up 165 inches of bass on Dardanelle, Jackson stood nervously in the post-event meeting as tournament officials called out the results and places. He was thrilled knowing that he had done well enough at his first-ever large-scale tournament to get a check.

What he didn’t expect was to hear his name being called during the top five, and then the top three.

“My face lit up even more,” Jackson admits. “Not only was I getting a check, but I was getting a trophy and the chance to compete even more.”

Then, something even more unexpected happened. Jackson’s two-day cumulative total of 165 inches was matched by Francis Tran, meaning that the event winner would be determined by a tiebreaker – the longest/biggest fish. Jackson’s biggest bass stretched 18.5 inches, Tran’s measured 18.0 inches. Jackson won by a half-inch.

“When they announced that a 15-year-old kid was in the top five, everyone in the building was like ‘wait, what?’ And they all were very supportive and shocked that (Jackson) was able to come out and do this,” Fred said.

The Roumbanis family hosted a barbecue after the tournament for the local kayak-fishing crowd and were impressed by how good Jackson had done against experienced pros.

“People were going around, chatting about how many they had caught, and it was somewhere around the range of seven to nine fish,” Fred said. “Then they would ask Jackson, and he caught 27 fish throughout the tournament. It was just unbelievable.”

Moving Ahead to Championship Event

After winning the Dardanelle Hobie Open, Jackson immediately qualified to fish the Hobie Tournament of Champions on Caddo Lake in Louisiana, starting Nov. 11. At the same time, Fred is fishing in the third General Tire Team Series qualifier with his powerhouse team of Dustin Connell and Cole Floyd.

However, that isn’t stopping Fred. He plans to drive all night to be there for Jackson when he gets off the water.

“Hopefully we can both be winners!” Fred said.

Jackson plans to spend more time in his kayak in the weeks leading up to the Caddo Lake tournament, to become more familiar with the boat and hone his natural skills.

“I have a ton of confidence starting out, but I don’t want to be overconfident,” Jackson said. “With having the little experience that I do have, fishing against these top pros is going to be something to look forward to.”

When he launches his kayak at Caddo Lake, Jackson will be fishing a body of water that neither he nor Fred has ever fished. Fred is confident that Jackson will figure it out, and will have fun doing it.

“Whether it’s a tournament or not, Jackson just goes out and has fun, and then he still does good,” Fred said. “There’s no doubt that Jackson will be on the Bass Pro Tour with me one day.”