AFTER THE STAGE: Powroznik’s Memories Took on a New Meaning on Lake Okeechobee 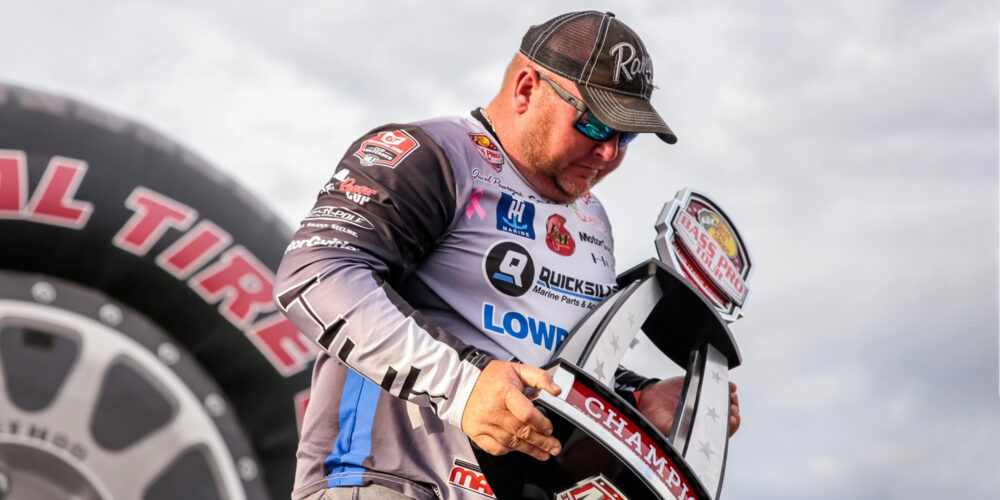 Jacob Powroznik's Okeechobee memories included an emotional look back at a day on the water with his dad. Photo by Phoenix Moore
February 27, 2020 • Joel Shangle • Bass Pro Tour

OKEECHOBEE, Fla. – In the weeks leading up to Bass Pro Tour Favorite Fishing Stage Two Presented by Bass Cat, Jacob Powroznik admitted in his blog on MajorLeagueFishing.com that he would try hard to avoid “fishing the past” on Lake Okeechobee. That blog was even titled “I Won’t be Fishing Memories on Lake Okeechobee”.

“I’m not a big fan of fishing memories,” Powroznik wrote.

But as he worked his way over a spawning flat near Tin House late in the day on Championship Wednesday, memories are exactly what the Virginia pro found himself fishing.

Memories of his dad, David Powroznik, and their last trip together on Okeechobee before David passed away in November of 2015.

“I started thinking about that list trip with Dad, and looking around at where I was fishing, it really hit me hard: ‘This is the same place Dad and I fished that last time’,” said Powroznik, who told the story of that last trip with David in an emotional postgame interview. “I feel my Dad with me all the time, but that few hours out there in that spot, I felt like he was right there in the boat with me. Matter of fact, I know he was in that boat with me. I can’t hardly think about it without tearing up.”

And tear up Powroznik did as he talked about David in the hours after his second Bass Pro Tour win in 10 events.

For those who know the Virginia pro well, they hear him talk about David frequently. It was David’s own love of fishing, hunting and the outdoors that shepherded his son into the life of a professional bass angler (and a duck-hunting guide on the side).

Powroznik tells the story of the small pond near his home in Virginia where he first learned how to catch bass – that pond was located on a hunting lease owned by his dad, a place that Powroznik visited so much that “it almost cost me my high school diploma” he says.

He tells the story of David joking about his childhood passion for hunting and fishing: “He used to say ‘Boy, if you could make a livin’ hunting squirrels, that’s what you’d do’,” Powroznik laughs.

Powroznik talks about his dad’s longtime friend, Woo Daves, and talking fishing with Daves growing up in Northern Virginia. Daves just happens to be the 2000 Bassmaster Classic champion.

And he talks about that last day on Lake Okeechobee with David, and the feeling that came over him in the third period of the Championship Round, when he caught nearly 15 pounds in 14 minutes and laid claim to the trophy.

“Man, my dad just caught ’em and caught ’em, we had a great day,” Powroznik remembers. “The whole day as I was fishing (the championship), I was thinking about how bad my (casting) arm hurt, but as soon as I caught that first fish (during the flurry), I didn’t feel a thing. It was like everything else in the world disappeared. The whole day was a blessing, but to be there on that spot on Lake Okeechobee and know that my dad was smiling down on me is something I’ll remember for the rest of my life.”