BALLY BET AOY UPDATE: Can Anybody Catch Wheeler for 2022 Angler of the Year? 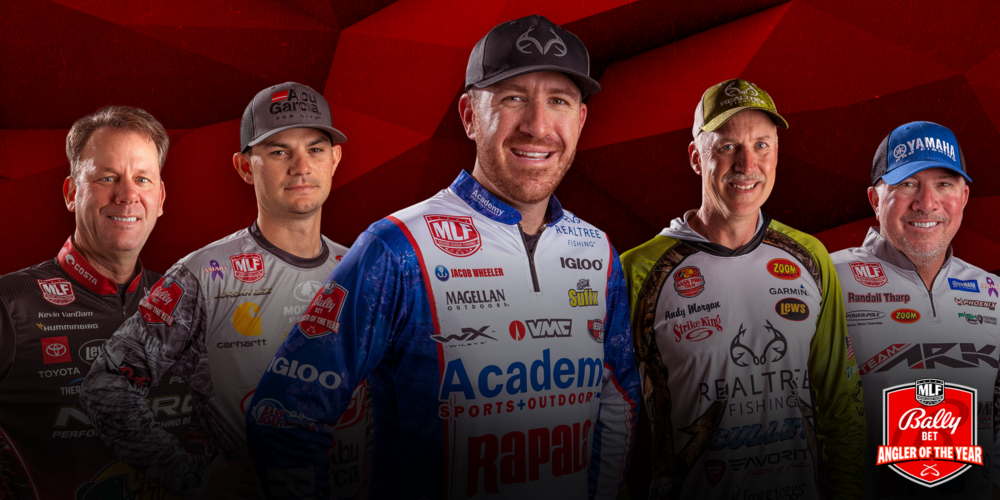 But with two events left in the seven-tournament race for 2022 Bally Bet Angler of the Year and its $100,000 payoff, one name/face remains comfortably perched atop the 80-angler standings, a spot that he’s held for a hearty portion of two years: Tennessee pro Jacob Wheeler.

The BPT field has just shy of eight weeks to rest up before the final northern charge at Cayuga Lake in New York (Aug. 6-11) and Mille Lacs Lake in Minnesota (Sept. 10-15). Here’s how the Bally Bet Angler of the Year race is shaping up with two events remaining.

The Wise Money is on Wheeler

Entering the last two laps of the 2022 Bass Pro Tour regular season, it almost feels like the Bally Bet AOY race should be renamed the Bally “Don’t Bet Against Wheeler” AOY race. That’s not being flippant or dismissive of the other anglers pursuing the Tennessee pro, it’s just examining the numbers and thinking like an educated bettor.

Wheeler outlasted Ott DeFoe in the final two events of 2021 to win his first career AOY by 15 points (494 to 479), completing one of the best individual seasons in the 50-plus-year history of the sport. But as astounding as it might sound following an epically great 2021 season, Wheeler’s 2022 campaign might be even better.

Wheeler’s second-place finish at Watts Bar in General Tire Stage Five Presented by Covercraft boosted his season AOY points total to 379 out of a possible 400, which extrapolates into an average of 75.8 points per event. His 2021 per-event average – a year in which he won three events and rang up just shy of $390,000 in winnings – was 70.6.

To borrow one of Wheeler’s favorite expressions … unreal.

So here’s the task at hand: For Jordan Lee (341) to run Wheeler down in the final two events, he’ll have to finish 19.5 places higher at both Cayuga and Mille Lacs. The raw numbers tell us just how tall of a task that is:

That third statistic is mind-blowing, approaching historical/unprecedented. I’ll dig deeper into those numbers in the near future, but for the 2022 Bally Bet AOY discussion at hand, suffice it to say that Wheeler hasn’t allowed 19.5 places ahead of him more than two times in two years (he finished 19th at 2022 Heavy Hitters).

Despite Wheeler’s daunting lead in the AOY race, it’s still pretty darn difficult to ever bet against perennial AOY threat Jordan Lee. The 2020 Bass Pro Tour AOY has two top 3 finishes of his own this season and has gone 3, 11, 2, 23, 23 in five events. Lee surrendered 43 points to Wheeler in the past two events, but the upcoming swing through New York and Minnesota put the Alabama pro on waters he’s routinely excellent on: Lee has nine Top 10s in northern fisheries, finished second on Cayuga in 2016 and ninth on Mille Lacs in 2017.

Lee is simply unavoidable in AOY races: he’s finished in the Top 10 in AOY standings in 75% of the seasons he’s fished at the tour level since 2015.

They both trail Wheeler by a nearly impossible margin to win another AOY, but let’s celebrate the facts:

Tharp Putting Together a Career Year

There’s a Honey Badger lurking in the five spot.

Randall Tharp has quietly (or, maybe not so quietly considering a serious flirtation with the win at Watts Bar) put together one of the best seasons of his 13-year tour-level career. He enters the New York/Minnesota swing with a pretty legitimate shot at climbing into the No. 3 spot, which would match the Florida pro’s career-best AOY finish – Tharp was third in AOY his second year on the Elite Series in 2016. Shout out to the Honey Badger’s diversity, he’s done it in a season without a single tournament day in Florida, or on Guntersville Lake or Lake Eufaula to his benefit.

Tharp has been the model of consistency in 2022, owning the mid-20s spot in stages one through four (he went 23, 23, 26, 27) before hair-jigging his way into a fourth-place finish at Watts Bar and climbing into the Top 5. Tharp has been solid on Cayuga and Mille Lacs as well, landing in that mid-20s to mid-30s spot the few times he’s competed there.