BASS PRO TOUR VIEWER’S GUIDE: What to Watch for Saturday on Discovery Channel 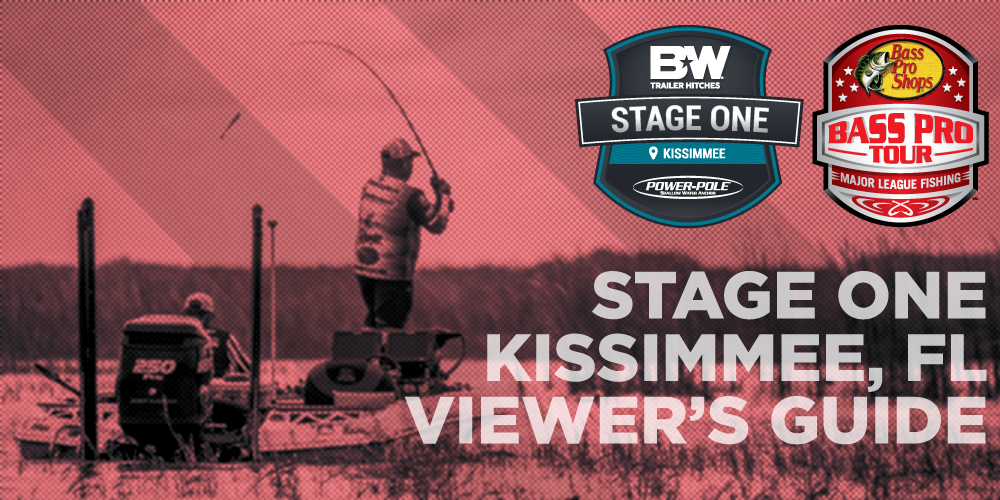 KISSIMMEE, Fla. – Everywhere you walk down the street in Kissimmee, Florida, you’re reminded of exactly where you are. This is a town with a Bass Court, a Bass Lane, a Bass Slough Road and a Fish Camp Road, after all, so it’s hard to miss the “fishiness” of the county seat of Osceola County.

Florida sunshine beams down on you as you head southwest on the main drag of the quaint downtown, past palm trees and Spanish moss. As you angle south, you pick up Lakeview Drive, at the end of which lies the bass-fishing promised land: Big Toho Marina, and the north shore of Lake Tohopekaliga, part of the famed Kissimmee Chain of Lakes.

And if you were in Kissimmee on the morning of Jan. 29, everywhere you looked, you were witnessing history.

As Bass Pro Shops founder Johnny Morris threw out the ceremonial first cast of the MLF Bass Pro Tour and 40 of the field of 80 anglers motored out onto Toho, headed for various parts of the Kissimmee Chain, it was clear that the bass-fishing world was about to witness something special.

Here’s what to watch for this Saturday as the Bass Pro Tour begins to tell those stories on Discovery Channel (7 to 9 a.m. ET and PT).

A Field of Greats

Three days prior to Day 1 of competition, the 80 anglers of the new Bass Pro Tour assembled as a group for the first time ever, to review the rules and witness the unveiling of the new red-and-silver champion’s trophy. To say that there was some firepower in the room is a gross understatement: 31 Angler of the Year awards, 17 Bassmaster Classic titles, eight Forrest Wood Cup trophies, and over $130 million in career winnings among them.

“To look around that room and understand the magnitude of that group of anglers we’d put together was quite a moment,” said Randy Howell, the 2015 Bassmaster Classic champion. “I’ve been doing this job for 27 years, and I haven’t been intimidated or nervous in a long time, but when I walked into that meeting and mingled with all these great anglers, I started to feel some butterflies in my stomach. I’m honored to be part of that group. It gave me some anxiety, but it also gave me a lot of pride to be part of the best group of anglers ever assembled.”

Although a stout percentage of the 80-angler roster had already played the game under the MLF “catch, weigh, immediate-release” format where every fish over 1 pound counts, 29 of those pros had zero experience competing under those rules when they arrived in Kissimmee. Furthermore, while 61 of the 80 anglers had already experienced the anxiety of SCORETRACKER® and the round structure where weights are zeroed, nobody – not even league organizers – knew exactly how that format would play out with 40 anglers a day competing versus the 10 to 12 in previous MLF events.

“I don’t even know what ‘good’ is in this format,” admitted Andy Morgan, a three-time FLW Tour AOY and one of the most successful pros in the sport. “Is 50 pounds a good day? Sixty? Hell, 70? None of us really know how high the bar will be set, but with this group, I expect it to be high.”

Supplementing the historic star power of the Bass Pro Tour’s 80-man field, the Stage One event in Kissimmee was also the first 40-man live competition utilizing SCORETRACKER®, the league’s real-time scoring system. Dealing with the stress of always knowing where you stand on the “scoreboard” in addition to the stress of locating and catching fish was a challenge that several anglers – including Forrest Wood Cup and Bassmaster Classic winner Luke Clausen – looked forward to with some trepidation.

“I have no idea how I’m going to respond to that, but I hope well,” Clausen joked. “I like to think I’m pretty even-tempered, but maybe I won’t be if I get behind and my official keeps telling me ‘SCORETRACKER® update, SCORETRACKER® update’. I might just tell him to turn SCORETRACKER® off and take my chances.”

How About the Kissimmee Chain?

Perhaps the biggest enigma of the week as the two 40-man groups opened up competition on the Kissimmee Chain was the mood of the green fish they were searching for. Lake Toho, Lake Kissimmee and the other fisheries of the Chain are known worldwide for producing fish in the 8-plus-pound range, but late-winter weather systems had moved through Central Florida for two weeks prior to the event, and competition week saw temperatures and barometric pressures rise and fall daily.

With the Kissimmee Chain’s giant females’ spawning urges conflicting with the Chain’s water temperatures, the hottest question of the week was “How will the bite be?”

“These Florida largemouth don’t like the cold,” observed pro Bobby Lane, who grew up in nearby Lakeland, and who can claim several tour-level Top 10s and wins in the Sunshine State. “It can be pretty tough to get them to bite when the water temperature drops a few degrees. I feel like we’re not quite there yet for those big females to really show up, but I think we’ll get there before this event is done.”

Viewers can watch all of the above questions being answered when they tune in to the Bass Pro Tour on Discovery, 7 to 9 a.m. Eastern and Pacific time.