BASS PRO TOUR VIEWER’S GUIDE: What to Watch for Saturday on Discovery 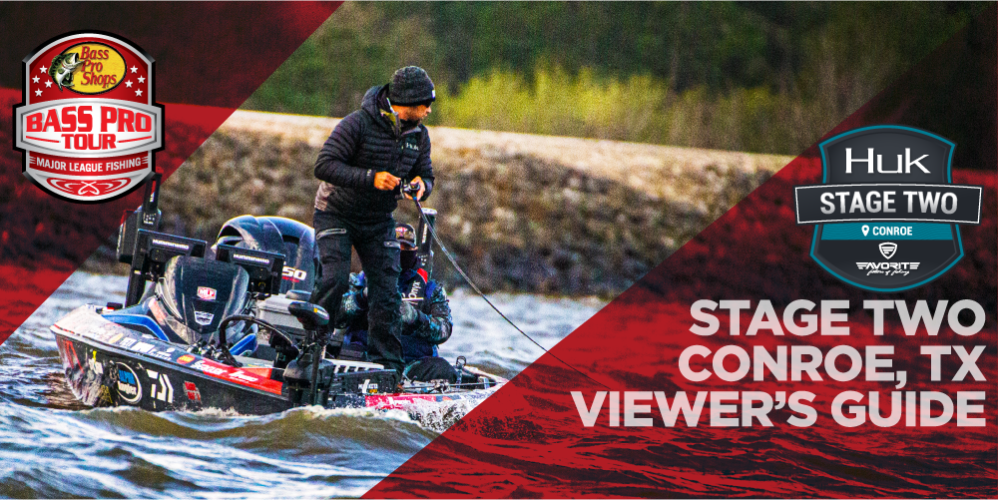 CONROE, Texas – As openings acts go, the Bass Pro Tour’s inaugural event in Kissimmee, Florida was hard to beat. As Discovery Channel viewers witnessed last Saturday (7 to 9 a.m. ET/PT), the MLF competition format produced not only its first champion in Alabama pro Jordan Lee, it also conjured levels of raw competitive excitement that had been previously reserved for the basketball court or mixed martial arts cage.

But Lake Conroe, Texas and its big-bass pedigree represent an outstanding follow-up.

One of the country’s most highly regarded big-bass tournament fisheries in the past 10 years, this 21,000-acre impoundment of the San Jacinto River has hosted some of the most dramatic moments in the history of professional bass fishing. And when the 80 anglers in the field arrived in mid-February for the Bass Pro Tour Huk Stage Two Presented by Favorite Fishing, they arrived at a fishery that was slowly (but surely) shaping up for a strong prespawn bite.

All the ingredients for a tasty helping of Texas-sized bass-catching goodness.

Here are some things to pay attention to this Saturday, Oct. 12 when you tune into the Bass Pro Tour on Discovery (7 to 9 a.m. ET/PT):

About That Conroe History…

Lee departed Stage One Kissimmee with the first-ever Bass Pro Tour champion’s trophy, a 43-pound construction of red-and-silver steel that currently sits in his home in Cullman, Alabama next to another monument of the bass-fishing world: the 2017 Bassmaster Classic trophy, which Lee won on Lake Conroe.

He would be an unavoidable choice if you were taking bets in February on which angler in the 80-pro field had a leg up on the competition.

Oh, but not so fast. Lee is far from the only Bass Pro Tour angler with history on Conroe: Rapala pro Dave Lefebre took home a $200,000 payday and the champion’s trophy in the 2009 Toyota Texas Bass Classic on Conroe; Mike Iaconelli and John Murray were runners up in the 2011 and 2013 on Conroe; and MLF veteran Gary Klein lived on the lake for three years.

Whose experience is worth more?

How Do Big Bass Affect the Outcome?

It’s never a matter of “if” a lunker largemouth will show up during a weeklong competition on Conroe but “when.” According to Texas Parks and Wildlife Division Toyota ShareLunker statistics, the lake has produced 18 fish over 13 pounds and boasts a lake record largemouth of 15.93 pounds. And several Bass Pro Tour pros are intimately familiar with Conroe’s giants: Iaconelli weighed in at least one 8-pounder in four of the previous events he’d fished there; Brent Ehrler and Ott DeFoe both connected with 9-pounders at the 2017 Classic.

“Lake Conroe is one of my favorite places to fish in the country,” Iaconelli said. “Anywhere you can go and know there are 8-, 9- and 10-pounders swimming around, you have to be excited to fish there.”

The early rounds of Stage Two (Shotgun, Elimination and Knockout Rounds) kicked out 23 fish over 5 pounds, including what would go down as one of the signature moments of the 2019 Bass Pro Tour: Andy Montgomery’s 9-6 “Thunder Cricket Giant,” an enormous largemouth that he wrestled over the gunwale of his boat as the game clock hit 0:00 in his Shotgun Round.

With the dregs of a central-Texas cold front lingering as the Championship Round commences, Discovery viewers will see just how close to prespawn/spawn the lake’s big female largemouth were.

Who Makes the Right Changes?

Stage Two was contested during the dictionary definition of “prespawn transition” as waters throughout the reservoir slowly climbed into the low to mid-60s. But with high, muddy water flushing into the San Jacinto system leading up to the event, water clarity and its relation to fish positioning was possibly an even bigger factor. And as witnessed during Stage One – where Lee made a crucial discovery of cleaner water on Lake Garcia to carry him to the win – the anglers who decipher the conditions best are always the ones to pay attention to on Championship Sunday.

“Conroe (was) not fishing easy,” admitted Texas pro Jeff Sprague, who qualified for his second Championship Round in the two Bass Pro Tour events contested to date. “That’s a situation where you have to put your head down and grind it out all day long, because you know that any next bite could be one of those 8-, 9- or 10-pounders.”