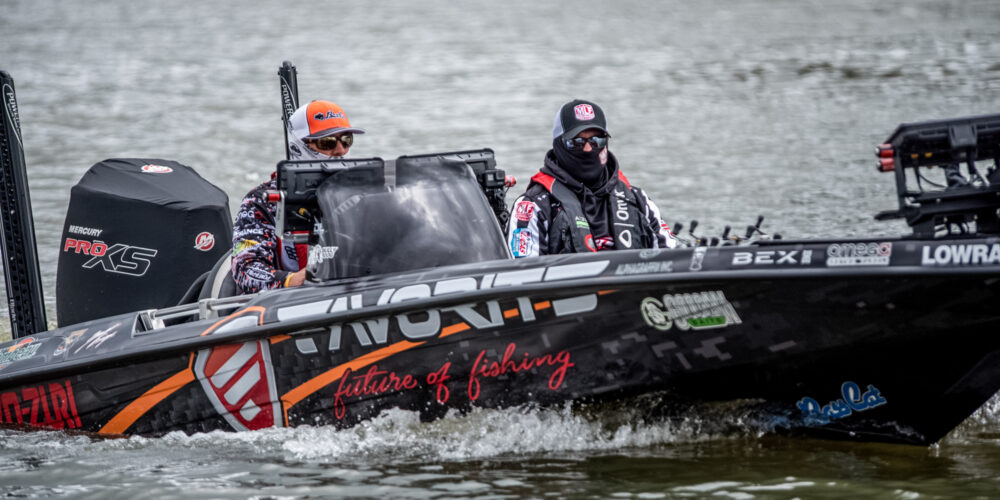 EUFAULA, Ala. – Zack Birge hasn’t yet grabbed his first event win in Bass Pro Tour competition, but if he continues to fish like he did during Qualifying Day 1 of Bass Pro Shops REDCREST 2021 Presented by Old Wisconsin Sausage on Lake Eufaula, the Oklahoma pro could be heading home $300,000 richer.

Birge used an Omega Genesis Ti spinnerbait to catch five chunky largemouth for a total of 20 pounds, 9 ounces. That weight landed Birge in seventh place heading into Day 2 of competition and in a great position to qualify for the Knockout Rounds.

“I got bit by five scorable bass all day long when I was really hoping for about 10 bites,” Birge recapped. “I got about 10 to 15 bites today, but only five of those fish were scorable. The ones I got were good ones, though.”

Good ones, indeed. He started his morning off with a 3-10, adding a 4-5, 4-13, 3-3 and 4-10 to cap off his day. The Favorite Fishing pro never deviated from his spinnerbait game plan and mixed up his targets instead of his bait.

“The technique I’m using is just so slow it can almost drive you crazy,” Birge said of his big spinnerbait. “I found an area with a bunch of shallow rock piles as well as some areas with stumps and brush piles. Those areas and that bait are how I got all my bites.”

Birge ended the round almost 11 pounds ahead of 20th-place Jacob Wheeler. With only the Top 20 anglers moving on to the Knockout Rounds at the end of Qualifying Day 2, Birge says Tuesday is all about securing his position and finding more areas where his spinnerbait can be effective.

“I’m going to go back and fish those productive areas on Day 2 and just try to expand around what I’m doing a little bit more,” Birge said. “I want to catch five or six pretty early on in the day so I can spend the rest of my time exploring the lake and finding some other things to fish.”

The Yo-Zuri pro has two Toyota Series wins and a Phoenix Bass Fishing League win in his young career but is still looking for that first Bass Pro Tour win. He’s come close a few times since joining the Bass Pro Tour, most notably a fourth-place finish at REDCREST in 2019 on the Upper Mississippi River. If Birge is able to walk away with a REDCREST win this time around, it would not only be the biggest of his career, but a win on an important lake for him personally.

“A win here would mean a lot to me because this is one of my favorite places in the entire country to fish,” Birge said. “I’ve had a few top 10s here and I was one fish away from making the Knockout Round at Stage One in 2020. I have some family that lives down here so if I was able to get a win with them around it would be pretty nice. We’ll see what the next couple of days hold, though. We gotta get there first.”