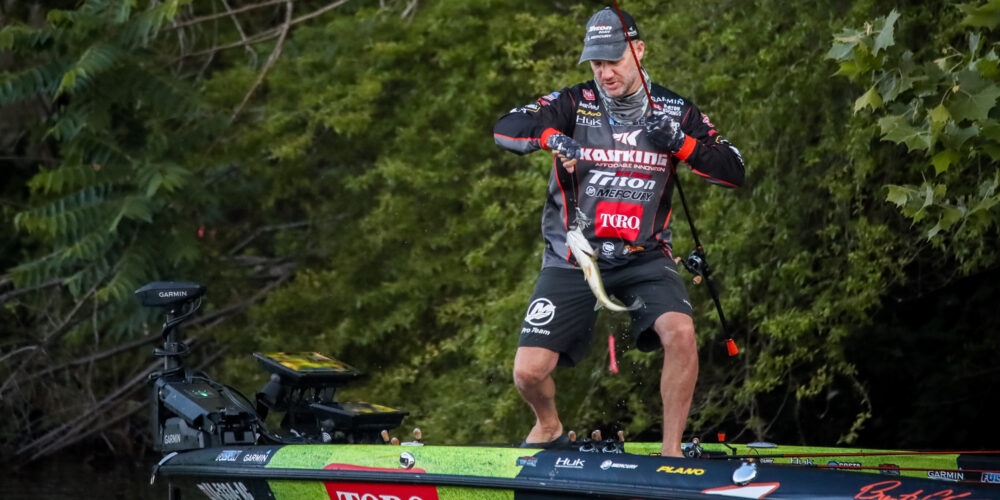 Bring on the ice water and electrolyte drinks – it’s getting hot outside. And if you’re targeting largemouth during these hottest months of the year, add a flipping stick to your hydration checklist and head to the shallows of your local highland reservoirs.

“This time of the year, July and August, things start to get tough fishing for bass,” admits Plano pro Brent Chapman. “My wife Bobbi would say ‘Let’s film an episode of our show Pro vs. Joe’ in the summer, and I’d usually pass on that around the area I live. Fishing is tough on highland reservoirs, but you can still catch bass, even in the heat.”

According to Chapman, the logical progression of fish moving deeper after the spawn gets turned upside down on highland reservoirs in the heat of late July and August.

“We often get a really good deep offshore bite in June, and it seems like the bass would all stay deep (in July and August), but they don’t,” Chapman says. “I suggest moving into shallower water when fishing in the heat of the summer because oxygen content changes and tends to push bass shallow. That’s especially true in the more stained lakes. Fish do get scattered (in summer), but since they’re in shallower water, they’re more catchable.”

Time of day is important for success in the summer, but according to Chapman, the best time to catch bigger fish isn’t necessarily when you’d think.

“You can typically get some decent topwater action early in the morning and in the evening, but for me, I’d break out the flipping stick and focus on the middle of the day,” he says. “In my opinion, the best time for big bass is around 11 a.m. to 1 p.m. or so – right in the middle of the day. Fish are most predictable then, and usually tight to cover. Bigger fish seem to have ‘lunch’.”

Chapman’s setup for flipping is simple and straightforward. He uses a KastKing 7-foot 5-inch flipping stick and a KastKing reel loaded with either 16- or 20-pound Gamma fluorocarbon.

His baits are more “snack-sized” than full-meal platters, and he serves them up right in the fish’s face, so they can’t not bite.

“Stick with small jigs, or compact creature baits,” Chapman says. “The flipping tube is a favorite of mine. It’s fallen off the radar, but day in and day out, it’s a phenomenal lure. And put it on top of their head – whether it’s docks, laydowns, or matted vegetation, just drop it right on them.

“Think of your lures like you would a bowl of M&Ms someone puts out. Even when you’re (not hungry), you’ll still grab that snack. Bass are the same way. Drop that little snack on them, and they won’t pass it up.”