Connell on Winter Bass: ‘The Number of Bites Go Down, the Quality of Fish Goes Up’ 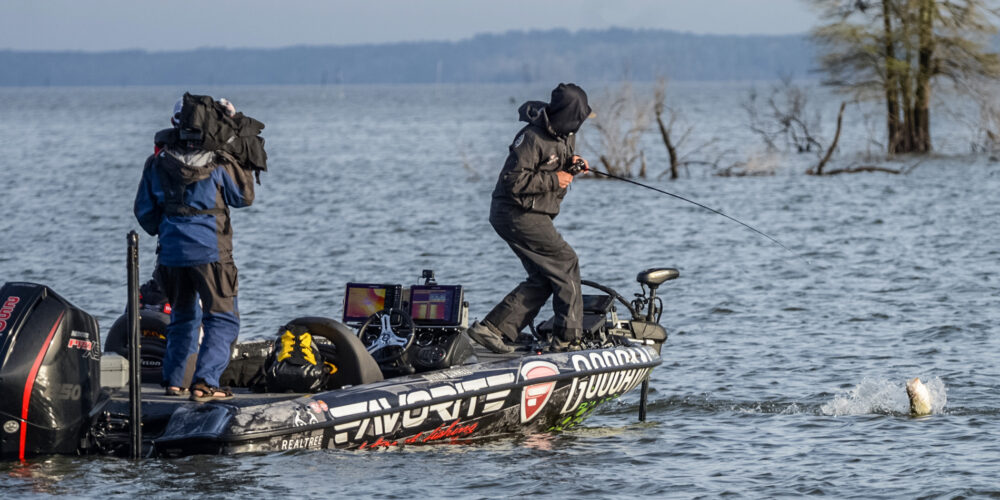 The cold winter months don't keep REDCREST champion Dustin Connell off the lake because he knows winter can produce some of the biggest fish of the year.
December 3, 2021 • Dave Landahl • Bass Pro Tour

Reigning and defending REDCREST champ Dustin Connell doesn’t hang up his bassin’ gear when the weather outside is frightful. On the contrary, he heads to his local Alabama waters to chase some of the biggest bass of the year. For Connell, cold weather activates schools of big fish south of the Mason-Dixon Line.

“Wintertime fishing is, in my opinion, one of the most productive times of the year to catch the biggest bass in the lake,” Connell confirmed. “This is especially true in Alabama and other states in the Southeast in general. The number of bites goes down, but the quality of fish goes up. This is one of the best times of the year to catch a 10-pounder.”

Connell keeps his approach pretty simple when searching for wintertime structure. Focus on deeper water with an abundance of cover, and you should be in the winter bass zone.

“Deeper structure for sure, but it seems like most fish in the Southeast don’t get super deep: maybe down 15 feet to 25 feet,” Connell said. “They’re also not just eating shad. Some of the biggest bass eat bream and crappie, and bream especially can be up a little shallower.

“Look for them in transition areas. Bluff banks, deeper banks with wood and brush on them, creek channel bends, bridge pilings, any of the areas where the bass can move up into shallower water, but have plenty of the deep cover close by.”

Once you find one bass, you should be able to locate schooling fish during the cold months.

“Bass really school up pretty well in wintertime,” Connell said. “I fish a lot on the Coosa River in Alabama during the winter, and the spotted bass act similar to largemouth there. They’ll group up in schools, so once you find one you usually have located several. The key again is finding that deeper structure and you will find the fish.”

Once he’s pinpointed the structure he wants to fish, Connell relies on a handful of baits that work throughout the winter months.

His favorites include jerkbaits, flat-sided crankbaits like a Shad Rap, a jig, a swimbait or a jigging spoon.

“I’d say the jerkbait is the number one bait for me,” Connell said. “I use 12-pound Seaguar fluorocarbon line and a Favorite Rods Pro Series 6-foot 8-inch jerkbait rod. I’ll fish a jerkbait around brush, wood, points, really anywhere.

“The Shad Rap or flat-sided crankbaits work well too. Just something about the way it moves in the winter. A jig with a Googan Bandito Bug in green pumpkin or black is also an excellent choice, especially when the bass are feeding on crawfish.”

If fish are holding on the deeper end of the structure you’re fishing, Connell suggests two more of his favorite baits: a spoon or swimbait.

“If the bite is deeper, a swimbait or a jigging spoon can be the way to go,” Connell said. “The Googan Saucy Swimmer rigged on a ⅜-to ½ Lockdown head is a good choice. Just slow roll it looking for an active school. If they’re out even deeper, I use an old-school Hopkins-style spoon. I try to match the spoon to the size of the bait. Occasionally, I’ll use the big flutter spoons. I just want it to mimic a dying shad on the retrieve.”

One last tip: Bundle up and prepare for the cold if you want to make it through a day of winter fishing.

“It can get really cold while you’re out fishing during the winter,” Connell said. “Make sure you dress appropriately and you can enjoy some of the best big bass fishing of the year.”