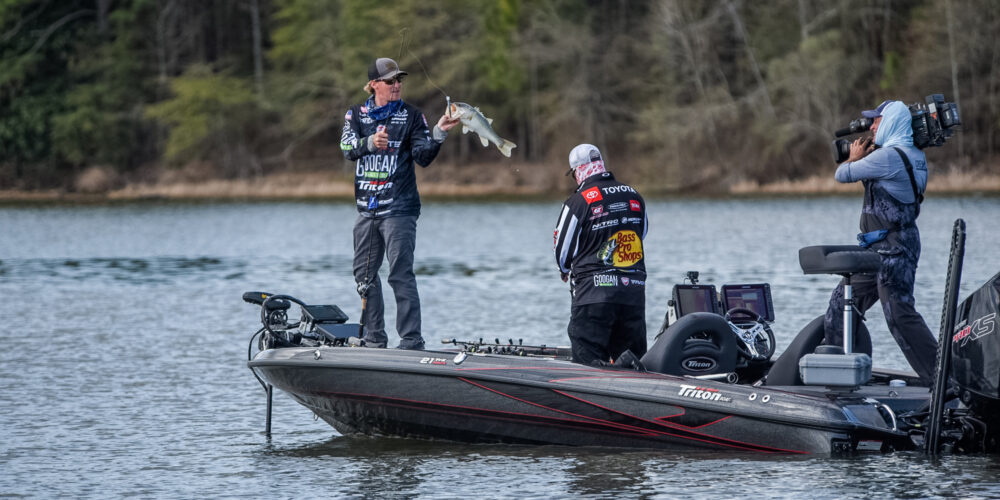 EUFAULA, Ala. – To win the biggest tournament of his career, REDCREST 2021 Champion Dustin Connell was forced to adapt and change each day of the five-day tournament on Alabama’s Lake Eufaula until he discovered what would become the winning pattern.

Connell connected with 12 fish for 36 pounds, 15 ounces on Friday to outdistance Michael Neal (31-4) to claim the REDCREST trophy and $300,000 first-place check. Here’s how the Mercury pro did it.

Connell is a noted shallow-water angler and known for his skills with a swim jig. That’s what he had planned as he prepared for REDCREST after his success during the 2020 Bass Pro Tour Stage One last February, an event that saw him win the Knockout Round before finishing fifth on the final day.

“I came here watching the weather like all of the other guys,” Connell said. “I intended to fish shallow and throw a swim jig. Last year, I was able to do that and found an area with fish pulling in (to spawn).”

That didn’t work out for Connell this time around, even though he gave it a fair chance throughout practice and during the first two days of the tournament.

“When we got here, there was so much happening with the water warming up and clearing,” Connell said. “Traditional fishing knowledge says ‘shallow, shallow, shallow,’ but I just don’t think the fish had caught up yet. There’s always a lull before the fish spawn when the fish are getting ready to spawn and they’re just swimming. Listening to SCORETRACKER® and hearing guys like Andy Morgan and Brent Chapman just catching one here and there gave me a clue. Those guys are shallow-water fishermen and aren’t going to be sitting out in 35 feet of water.”

Connell still tried to force the bank bite the first day and caught two on a spinnerbait on a brushpile before moving to the bank.

“I had a pocket in Cheneyhatchee Creek and caught three real quick on a swim jig at the end of the day,” he said.

Connell ended the first Qualifying Round with a five-fish tally for 15-5 and found himself in fifth place. But, it turns out his swim jig bite wasn’t the deal.

“The second day, I caught a 5-pounder on a spinnerbait in the morning on the brushpile and then went shallow,” Connell recalled. “I tried to force the shallow bite and figured I could catch some real quick on a swim jig and then go practice. I did that all day in several creeks and couldn’t get a bite. It was terrible, but I finally got one flipping and I barely made the cut.”

Connell brought in just two bass for 7-10, squeezing into the Knockout Round in 19th place.

After barely making it to the next round, Connell sensed that he would have to make a drastic change on day three.

To begin his Knockout Round, Connell decided to give his primary brushpile one more shot. When he arrived, he found different conditions from the previous days.

“When I stopped on the brushpile, the water had cleared up,” he said. “I couldn’t get a bite on a spinnerbait or a jig. I decided to throw a jerkbait, and had two fish follow it on my first cast. I could see them on my Lowrance ActiveTarget. My second cast, I caught one of them.”

This was around 10:30 a.m. and Connell continued to catch fish and finished the day with six bass for 17-4 to finish the round in second place.

After catching a 3-pounder late in the day, he switched gears to scanning for more brush on the south end of the lake. The right brushpiles were shallow, sitting in 6 to 8 feet of water – Connell believes that depth was the staging depth before fish headed shallow to spawn.

“Once I had that last fish, I knew I had made the cut,” Connell said. “I spent the last 45 minutes of the day idling and marking everything I could for the Championship Round. What I found during the Knockout Round was what I ended up winning the tournament on, it’s pretty crazy.”

He stuck with the jerkbait program and sealed the deal on his first REDCREST title on the final day.

The top four anglers’ patterns were very similar, and the use of forward-facing sonar like Lowrance ActiveTarget played heavily in each of their finishes.

“I would’ve caught some fish without it, but I wouldn’t have won without ActiveTarget,” Connell admitted. “I watched every single jerkbait fish I caught come up and eat it. The key was watching and seeing how the fish were acting around the brushpiles.”

Connell saw fish on ActiveTarget in and above the brush, and would cast his jerkbait to one side of where they were positioned.

“If I saw a fish, I would pan my trolling motor just a little to the side and cast there,” Connell shared. “Casting right to the fish would get your bait hung up in the brush. Anytime I saw a fish rising to the bait quickly, I knew he was going to bite. I would keep working the bait until it locked up and they had it.”

Another key to Connell’s win was utilizing a deep-diving jerkbait, even though it was shallow water.

“The bait I was using would dive to 8 feet, but it takes a jerkbait a long time to get down to that depth,” he said. “I would bomb the bait past the pile and then reel it a couple of times to get it down quicker.”

“Normally, I like a 7-foot rod for jerkbaits,” Connell began. “I went with a shorter rod because it was more close-quarter casts and you could pay attention to your electronics and kind of feather the bait a little better.”