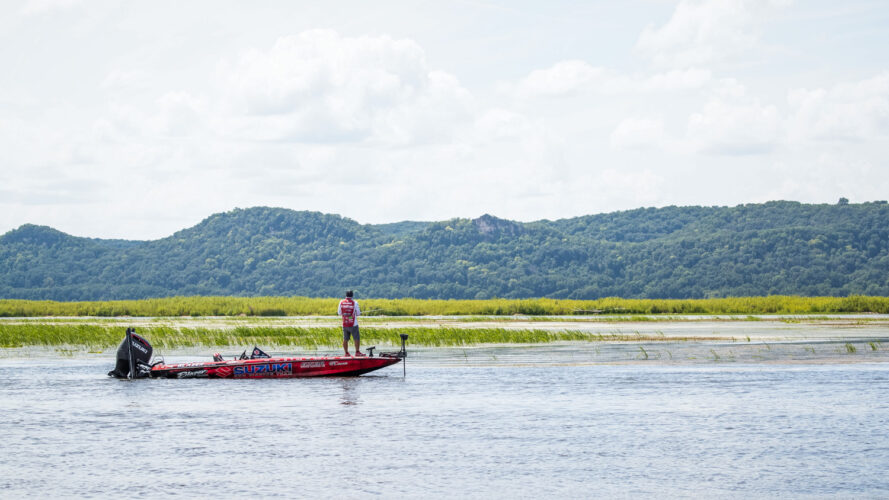 After the bass spawn, some stick around in shallow water and some head to the depths. Along with the ending bass spawn, you also have shad and bluegill spawns, creating some of the most dynamic and fast-changing times of the year. To make the most of the early days of summer, Dean Rojas moves quickly, targets transitional areas, and looks for spawning bluegill.

Rojas loves fishing this time of year because it allows him to do two things that fit right into his strengths: fish shallow and fast.

“It’s a great time of year because a bulk of the fish are up shallow and easier to catch, in my opinion,” he said. “The water is warming and changing every day and you have the shad spawn and then the bluegill spawn, which are always a factor this time of year. All of the food is shallow, so that’s where most of the bass will be.”

When looking for bluegill beds, Rojas uses his experience of where they spawn, but adds other senses like smell and hearing.

“The bluegill like to spawn on flat points and in little cuts, drains, and indentations that are protected,” he said. “You can also hear them popping on bugs and smell them; it’s a unique aroma that’s the same as fishing for bluegill with worms on the bank. It’s a fresh smell and you’ll know it when you smell it.

“The neat thing about the bluegill spawn is that once you figure out places they are spawning, it will be the same in every cove and pocket, and you can run that all over the lake to find more.”

He’ll stick around once he finds forage activity of any kind because he says the bass won’t be far away.

“If you get in areas with forage, the bass will be there and usually, if you get one bite, you’ll get several more,” he said. “I’ve also learned that fish tend to group up by size after they spawn and you can get into a big group of females feeding on bluegill while the males are still up guarding fry.”

Rojas enjoys fishing after the spawn because power fishing dominates and he has the opportunity to fish some of his favorite lures, including the SPRO Bronzeye Frog that he’s known for.

“It’s time to throw power baits like a frog, flipping, crankbait, topwater, vibrating jig, and to pitch and flip,” he said. “The fish are just starting to move out and the 5 to 6 feet range is usually very good. You can fish fast or slow and catch fish this time of year.”

When fishing a frog, Rojas uses both the standard and popping version of his namesake frog and mixes in topwater baits and soft plastics.

“Frogging is a good portion of what I’m doing this time of year, but you can do a lot of things to catch them,” he said. “The popping frog is king because you can work it slower and imitate spawning bluegill. The topwater bite with walking baits and poppers is also good and so is a vibrating jig or Carolina rig with a short leader. There’s just so many ways to catch them this time of year and a lot of activity up shallow, which is why this is such a great time to be out fishing.”