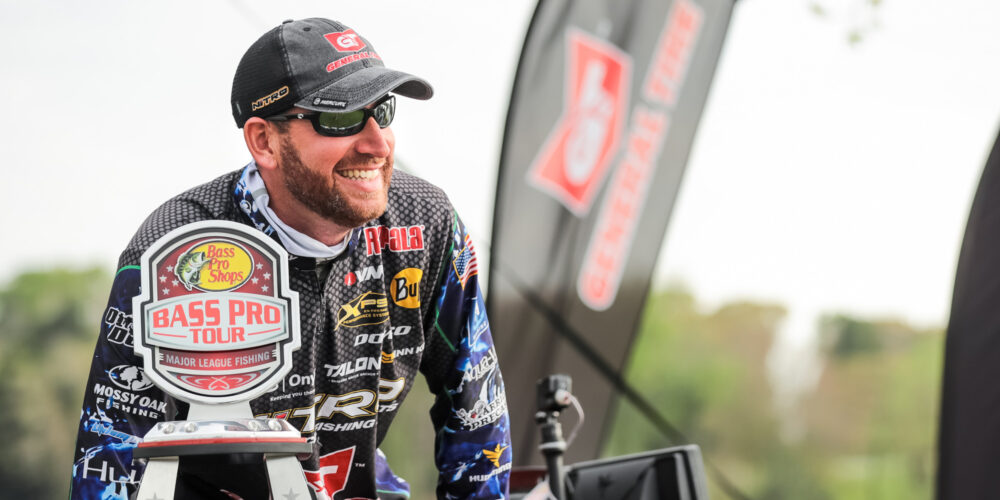 LAKE ATHENS, Texas – After five days watching the field battle with big bass at the General Tire Stage Three Presented by TrueTimber on Lake Fork, the Championship Round moved to Lake Athens.

Athens set up much differently than Fork and was a complete unknown to nearly every angler in the field. And while very little was known about this 1,799-acre lake located an hour south of Lake Fork, the day developed into one of the closest races seen in the final round of a Bass Pro Tour event.

That was until Ott DeFoe caught fire and turned a close tournament into an all-out blowout. His ascension to the top was quick and unrelenting.

With just over an hour to go, DeFoe found himself in fifth place with less than 20 pounds for the day, trailing then-leader Mark Daniels, Jr. by over 15 pounds. That’s when he turned things on and left the field in the dust.

DeFoe Rallies to a Landslide Win

DeFoe did most of his damage a short idle from takeoff, fishing near a bridge. He put on a clinic in the final 75 minutes of the day with a flotilla of bass boats, kayaks and pontoon boats getting a front-row seat to watch one of the best anglers in the world dominate the competition.

DeFoe’s fishing spot was so close to the ramp that he was easily the first angler back; when he put his boat on the trailer a few short minutes after lines-out, he was still trying to process what just happened.

This was surely what the other nine anglers were feeling.

“That last hour was one of the more special hours that I have ever had in all of my time bass fishing,” DeFoe said.

He discovered his honey hole by watching his electronics, specifically side imaging.

“I was idling through the bridge and could see the shadows of the fish on the graph,” DeFoe said. “I started casting to them and could feel the bait bumping off of the fish because there were so many there. It took me a few casts to get one to bite, but once you get them fired up, they usually start biting.”

He scored bass on a variety of baits, including a jerkbait, topwater, and bucktail jig, but the crankbait bite is what sealed the deal for DeFoe.

Alton Jones, Jr. also put together a nice rally during Period 3, and although it wasn’t as furious as DeFoe’s, it was enough to move him into second place. He was content with the finish and how the day unfolded.

“It was a blessed day and I thought I might have a chance to pull out the win. I have to say congrats to Ott for blowing us all away,” Jones said. “Second place is still great and gave me some great points for the Cup and REDCREST.”

He ended the day with 13 bass for 41 pounds, 9 ounces. His fish on Lake Athens fell for a wacky-rigged YUM Dinger and a bladed jig with a YUM Pulse swimbait serving as the trailer.

Daniels took control early in the day thanks to several nice catches, including a 6-14 in Period 1. He remained in the lead for much of the day before both Jones and DeFoe passed him in the final frame.

“It was a great day, but I expected for us to catch more fish here based on the practice I had, but I can’t complain whatsoever,” Daniels said. “I would have liked to have won, obviously, but when guys finish the day like Ott did, there’s nothing you can do.”