I Spy(bait) With My Little Eye: Aaron Martens’ Spybait Secrets 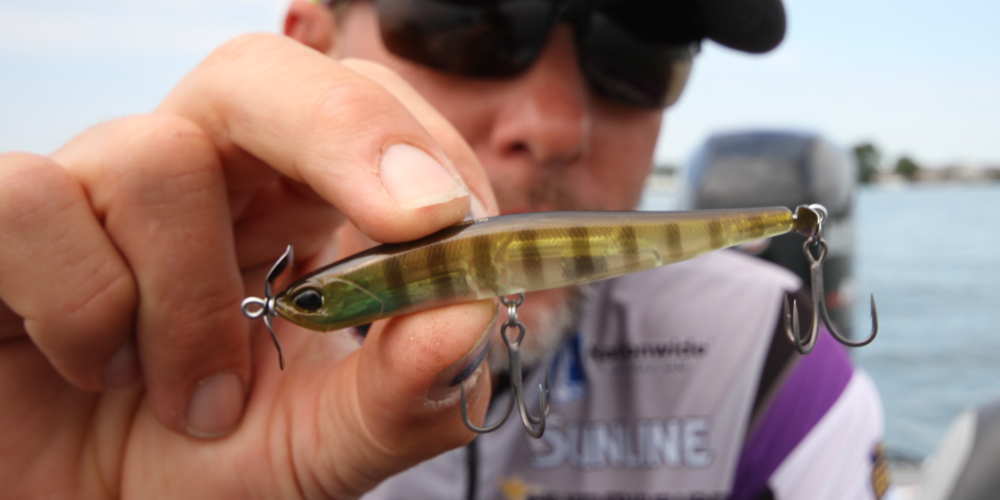 Over the past few years, a new technique has arrived on the bass fishing scene: the spybait. These diminutive hardbaits feature tiny props on each end, and the lure is fished subsurface without any aggressive action imparted by the angler.

They first caught on for open-water smallmouth on places like the Great Lakes, but as spybait usage has advanced, the bait is being used in more and more situations by MLF pro Aaron Martens and other fans of the technique.

What Makes Spybaits So Effective

The spybait is a unique reaction lure, as it produces minimal action as it slowly comes through the water column. In typical Martens fashion, he has a unique way of looking at these lures.

“It is like a baitfish swimming along with a blindfold on, totally oblivious to what’s going on as it swims by itself,” Martens says. “The bass watches it and starts to follow it, and then it just eats it.”

This non-action is part of the effectiveness of this style of fishing, and even though Martens says it works all year long, there are key times when it is the best option.

“It’s like a jerkbait in that you can catch fish all year with it, as long as the water has at least a few feet of visibility. Also, the clearer the water, the better,” Martens says. “I would say the prespawn to late Fall is the prime time, but it will get bites any time of the year.

“Spybaiting shines on the days when it’s too calm to throw a jerkbait, and works great when the fish are scattered because it’s a finesse reaction bait that you can use to cover water.”

How Martens Fishes It

One of the biggest keys to fishing a spybait effectively, according to Martens, is a slow and steady retrieve and a horizontal presentation.

“I cast it, let it sink, and then slowly start bringing it through the water column,” he advises. “Like all reaction baits, you have to figure out the right depth and cadence they want that day. They have a nice wobble, even at very slow speeds.”

Martens advises to experiment with the bait to determine the rate of fall for your gear and line setup, and then use a countdown method to fish the bait in different depths. The simplest way to do this, according to Martens, is to drop it down beneath the boat and count how long it takes to reach the bottom.

“You can get the feel of it pretty quickly and notice how fast it is falling,” Martens shares. “I’ll also sometimes just stop reeling and see how long it takes to hit bottom, to see where the bait is swimming.”

This is primarily a finesse tactic with spinning gear, but Martens says some of the heavier baits can be fished on baitcast gear.

He spools his reel up with 5- to 6-pound Sunline FC Sniper Fluorocarbon, and switches to 7-pound if the water is warmer.

“If it’s not gin clear, you can get away with braid to a fluorocarbon leader,” Martens says.

All of the baits he uses are made by Duo Realis, a Japanese company that helped to pioneer the technique in North America. The original Spinbait 80 is Martens’ first choice, but the heavier Spinbait 78 Alpha is another one of his favorites.