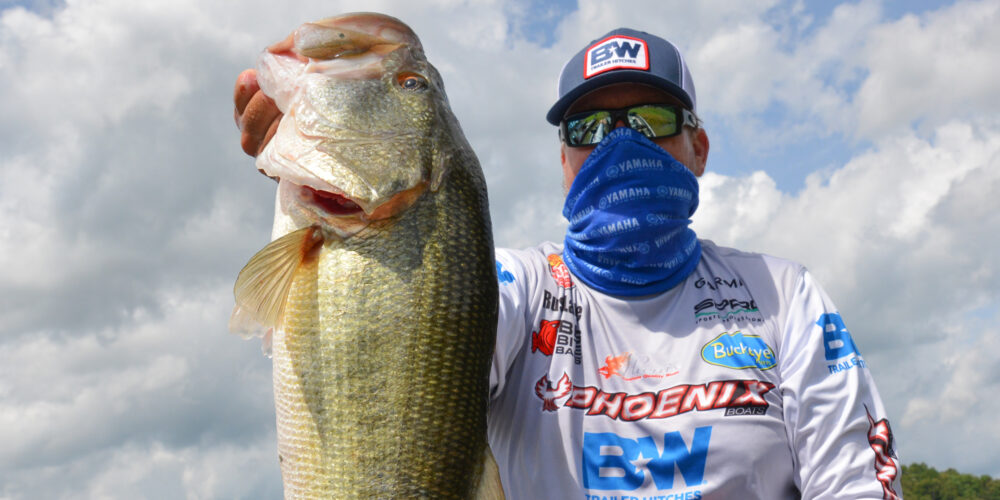 Anglers are looking for fish like this 7-pounder (caught by Russ Lane on Day 1) to catch up to leader Jacob Wheeler. Photo by Joel Shangle
June 24, 2020 • Joel Shangle • Bass Pro Tour

DAYTON, Tenn. – As the field of 204 boats took off onto Lake Chickamauga this morning for Day 2 of the FLW Pro Circuit Super Tournament, 203 of the competitors had a tall task ahead of them: chase down Jacob Wheeler.

Wheeler, who moved to nearby Harrison, Tennessee in 2017 and claimed one of his biggest career wins on Chickamauga in 2014, brought 24 pounds, 9 ounces to the scales on Day 1 to claim a lead over fellow Chickamauga hammer John Cox (23-9). And as Day 2 got underway, both the FLW Tour and MLF pros fishing for part of the $1.3 million purse knew what they were up against.

“Wheeler fishes this lake more than anybody, by a lot,” said MLF pro John Murray. “He’s just going to be hard to beat out here, no matter what time of year, or the number of boats in the tournament.”

The first day of Super Tournament competition played both deep and shallow, with several anglers in the Top 50 (like Justin Lucas, in fifth with 20-3) sharing time in pursuit of of the offshore ledge bite, and a handful (like Cox) fishing strictly the bank. And surprisingly, Watts Barr Lake – the reservoir above Chickamauga – was productive for a handful in the Top 20 (including MLF pro Andy Morgan, who sits 11th with 18-6).

Wheeler – as is usually his approach – did a little bit of everything, catching three of his keepers shallow and two offshore.

“You can’t get caught up with one deal this week,” Wheeler told FLWFishing.com. “It’s going to take a little bit of everything this week: a little hodgepodge deal. So that’s my game plan, to not commit to one particular pattern.”

Lucas had the best day of the 56 MLF pros competing in the first Super Tournament, sticking with an offshore pattern that came on strong during the second half of the day. Morgan similarly scrambled for his 18-pound bag late in the day, scrapping his morning plan to focus on Watts Bar.

Follow the live coverage of Day 2 of the FLW Pro Circuit Super Tournament at FLWFishing.com. FLW Live will stream from six boats daily, from 7 a.m. to 2 p.m. CDT.