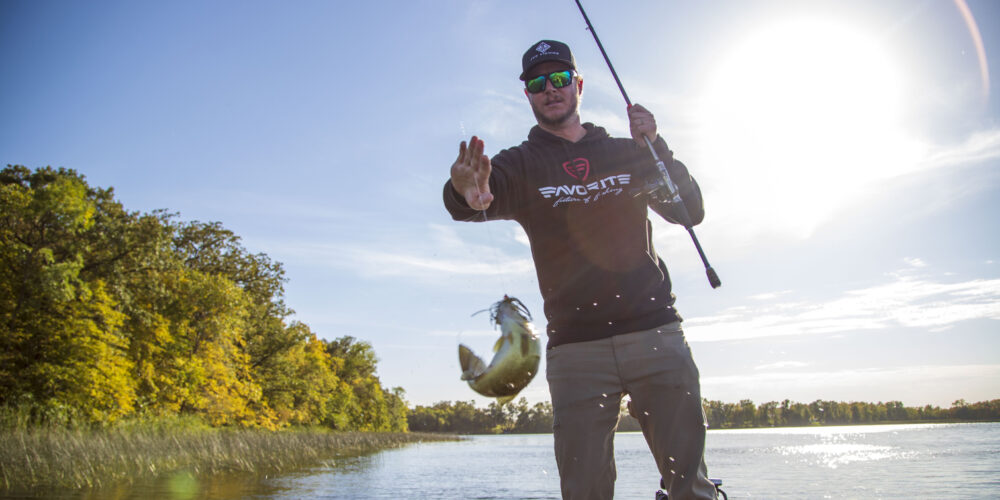 During the fall of the year, anglers in northern states like Michigan, Minnesota, Wisconsin, etc., experience some of the best fishing of the year. As the leaves start to change colors, Northerners who spend time on the lake versus the deer stand can cash in on some excellent bass fishing. Michigan-based Mercury pro Jonathon VanDam spends plenty of time in the woods in October, but also gets in on the action in the water.

His approach in early fall boils down to staying on the move – both with his baits and his trolling motor – and focusing on shallow water with proven fall techniques.

One of the keys, according to VanDam, is to remain flexible this time of year and be willing to change every day you fish (and as conditions change). The clues that signal that the fall bite has arrived are straightforward – shorter days and the first significant cold front.

“The first thing I try to do when I launch the boat is to figure out what stage the lake is in,” VanDam said. “In northern waters, every transition of the year happens faster than anywhere else in the country. Everything is condensed, whether it’s the spawn cycle or late in the year, so you have to stay on top of what’s happening because it changes daily.”

To gauge the state of the bite on a lake, one of the first places he looks is ultra-shallow water, knowing that the most active fish can usually be found here, especially after the first few nights when the air temperature creeps into the 40s.

“During the fall months, when the fish are feeding, they’ll get shallow after that first cold snap,” he said. “You can’t fish shallow enough and the shallow fish are there for one reason – to eat. They know that the ice is coming soon and you’ll often find a lot of fish grouped up in shallow water and feeding up.”

What to Look For and Top Fall Baits

Two of VanDam’s top fall baits are moving baits, such as a lipless crankbait and a swim jig. Both allow him to fish fast and are great for shallow water.

“The fish are super aggressive this time of year, so it’s a lot of moving baits for me,” VanDam said. “You have to cover water until you find the biggest groups of fish and those baits let you do that.”

“That rod is a lot stiffer than a traditional crankbait rod, but it’s great for ripping a lipless from grass,” he said. “It has enough backbone that you can snap the bait free and not get gummed up with grass on every cast.”

VanDam alternates between 14-pound fluorocarbon and 30-pound braid for his swim jigs, depending on the cover. His rod of choice is a 7-foot, 5-inch medium-heavy Favorite HEX rod. “I’ll use the braid for the thicker grass and fluorocarbon for more open water,” he said.

“I like to look for banks with a mix of cover and harder bottoms,” VanDam said. “Smallmouth like to be on gravel in more open areas and where sand, grass, and rocks mix, but they will still get very shallow. For largemouth, reeds, lily pads, and other grass like milfoil and cabbage will be prime areas, especially if you can find them mixed together in one area.”