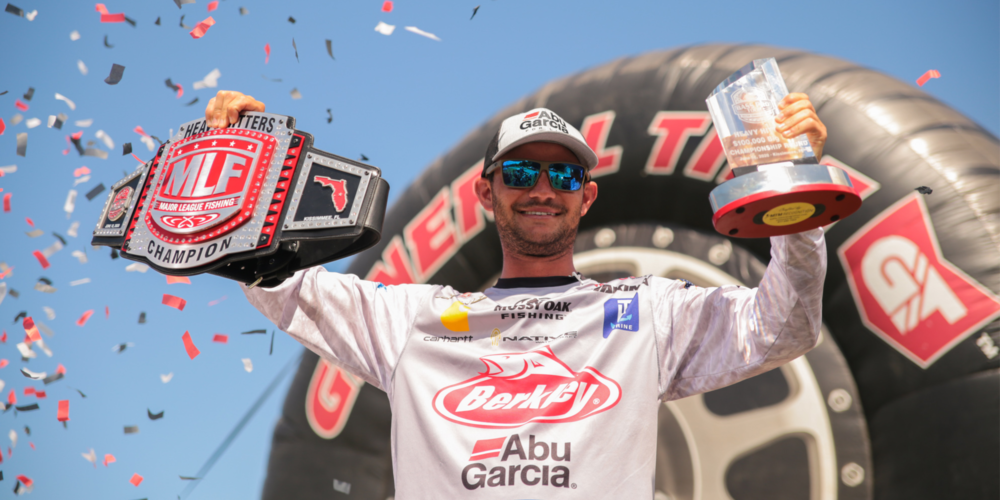 Jordan Lee had a day like no other, taking home the Toyota Heavy Hitters Presented by Venmo title and the $100,000 Big Bass. Photo by Phoenix Moore
June 12, 2020 • Tyler Brinks • Bass Pro Tour

KISSIMMEE, Fla. – It was a runaway victory Friday to conclude the Toyota Heavy Hitters Presented by Venmo on the Kissimmee Chain of Lakes. Jordan Lee took control early in the day, and ran laps around the field as he continued to target offshore brushpiles on Lake Toho.

Late in Period 3, Lee landed a 5-pound fish that pushed his lead to 26 pounds on SCORETRACKER®. At the time, that was double the weight of second-place angler Bryan Thrift’s, who was sitting with 26 pounds, 2 ounces.

After that catch, Lee spoke to the MLF NOW! live stream studio crew, and in his own words stated what many watching were thinking.

“I don’t even know what to say anymore,” Lee told MLF commentators Chad McKee, JT Kenney and Marty Stone. “It’s just been one of those days.”

Lee tends to have these kinds of days more often than other anglers.

In the end, the Berkley pro won the event by nearly 20 pounds to collect $100,000. Lee also pocketed $100,000 for the day’s biggest bass. That 7-4 fish (which was the lightest big-bass winner of the week but proved to be enough to gather the big check).

Lee claimed the trophy the last time the Bass Pro Tour visited the Kissimmee Chain of Lakes, winning the inaugural event during the 2019 season. Going into this week, he had a good feeling about returning here.

“It’s an unbelievable feeling. Kissimmee has been good to me,” said Lee. “I felt comfortable out there all week.”

During practice, Lee set out to look for something different than everyone else was fishing and that turned out to be brushpiles in 5 to 7 feet of water.

“I noticed everyone was congregating on the big sections of grass and I don’t like fishing in crowds,” Lee said. “That told me I needed to find something off the wall. I found a brushpile on my Lowrance StructureScan (side-scanning sonar) and made a cast with a lipless crankbait and caught one immediately and it had a bigger one following it in.”

From that point, he was committed to searching for more brush and found approximately 20 different piles on Lake Toho throughout the week.

“My goal was to scan every inch of Toho and I continued to search for more places even during the tournament,” he recapped.

Several baits accounted for fish he weighed in this week, including a 2.5-sized squarebill crankbait, a plum-colored 10-inch Berkley Power Worm, a 6-inch Scottsboro Tackle swimbait, and a hair jig.

Bryan Thrift remained in contention all week long and employed a similar pattern as Lee, fishing offshore brushpiles as well as vegetation. He wrapped up the Championship Round with seven bass for 33-3.

“Today went pretty good and I got about the same amount of bites I had all week. I just flat got beat today,” Thrift said.

He keyed on water between four and five feet deep with a swim jig, Damiki BTC-60 crankbait, and a Damiki Mega Miki II worm.

The big worm was the best producer in the final round – Thrift used a plum color and fished it on a Texas rig with a 3/8-ounce weight and a 5/0 Berkley Fusion19 hook.

Rose Heats Up After Taking a Swim

All week long, Mark Rose was on solid bass in offshore grass, as evidenced by his 9-2 bass in the Qualifying Round. He also won Thursday’s Knockout Round. But he started slowly in the final round, and was sitting at zero until the closing moments of Period 2.

That’s when he hooked a bass that got wedged in the grass. Time was ticking to close out the period, and he dove it to retrieve the bass with less than a minute to go. He landed the bass in the final seconds of the period, which sparked rally to third place with five bass for 21-14.

“I feel blessed with the week,” Rose said. “But, I’m a little bummed with my finish today because I lost a big fish because of my execution.”

All week long, Rose targeted grass, bluegill beds, and brushpiles and caught the majority of his bass on spinning gear in 5 to 7 feet of water.

He caught the bass on a hair jig, the only bass he caught on it all week long.

“I started the day fishing in the same place I started every day,” Lee said. “I picked up a hair jig made by my buddy David Allen, which is more of a Tennessee River thing. It’s not always the best for shallow water like I was fishing, but I fired it out there and it hit it right at the boat.”