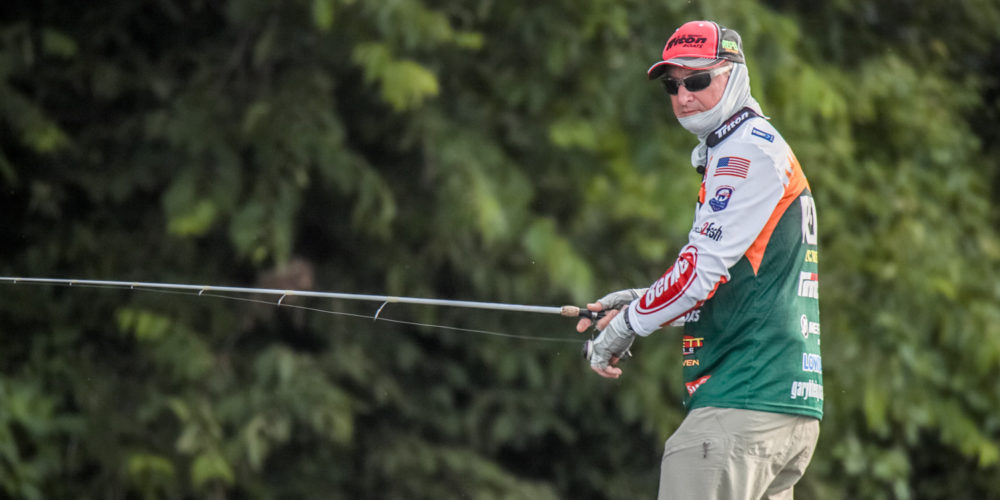 Gary Klein took time to reflect on the progress MLF has made after one season of the Bass Pro Tour. Photo by Joe Branch
June 30, 2019 • Mason Prince • Bass Pro Tour

NEENAH, Wis. – It was fitting that one of the masterminds behind the creation of the MLF Bass Pro Tour was competing on the final day of the regular season. Major League Fishing co-founder Gary Klein wrapped up his season with a sixth-place finish in the Evinrude Stage Eight Presented by Tracker Off Road.

Klein finished the year with five trips to the Knockout Round and two Top-10 finishes under his belt. The Texas pro was unable to get a win in the final Stage of the season, that crown going to his on-the-road roommate, Cliff Pace. Although his season his over, Klein was able to take a step back at the end of a long season and appreciate what he helped build.

“I feel sadness right now because I really want to keep competing,” Klein said with a chuckle. “I’m really proud of our team and everyone involved in Major League Fishing. I’m thankful for everyone who has stepped up to the plate and helped us build this league. Our vision is grand and it’s way bigger than what we accomplished this year. This is just the beginning.”

Certain to be Stress

We’ve heard multiple anglers this year mention just how stressful the MLF format can be—Stage Eight Champ Cliff Pace mentioned it right after he clinched his win Sunday afternoon—and Klein agrees with all of them. He has seen his fair share of heartbreak and triumphs this season thanks to SCORETRACKER®, but that was all by design.

“This format is the most gut-wrenching form of competition there’s ever been in competitive bass fishing,” Klein said. “You never have any breathing room until the end of the final period. That’s how we made this format and we wanted it to be this way. I think we succeeded in doing so.”

When you watch something you helped create work its way from the ground up, there are plenty of special moments along the way. But when the Lowrance pro looks back on all eight Stages of the Bass Pro Tour, one key moment sticks out to him the most.

“The moment I’ll remember most from the season was a moment at the very first event,” Klein reminisced. “The first day of Stage One in Kissimmee, Florida, I caught the first scoreable bass in the history of the Bass Pro Tour. Believe it or not, I actually practiced for that one cast during our practice rounds. I went to a spot right outside of where we took off and threw a Berkley General on a drop-shot and caught the first-ever scoreable bass. I’ll remember that moment forever.”

Eyes to the Future

The immediate future for the Bass Pro Tour is easy to predict: the inaugural REDCREST Championship will take place in La Crosse, Wisconsin on August 21. As for the distant future, Klein and company have big plans for the budding league.

“It’s amazing to look at where we were a couple of months ago and seeing where we are today,” Klein reflected. “I was talking with Boyd Duckett the other day, and we both agreed that MLF is arguably the most recognized circuit in bass fishing, and we have done it in just six months. There’s no telling what we’ll look like five years from now as we continue to build MLF from the top down.”