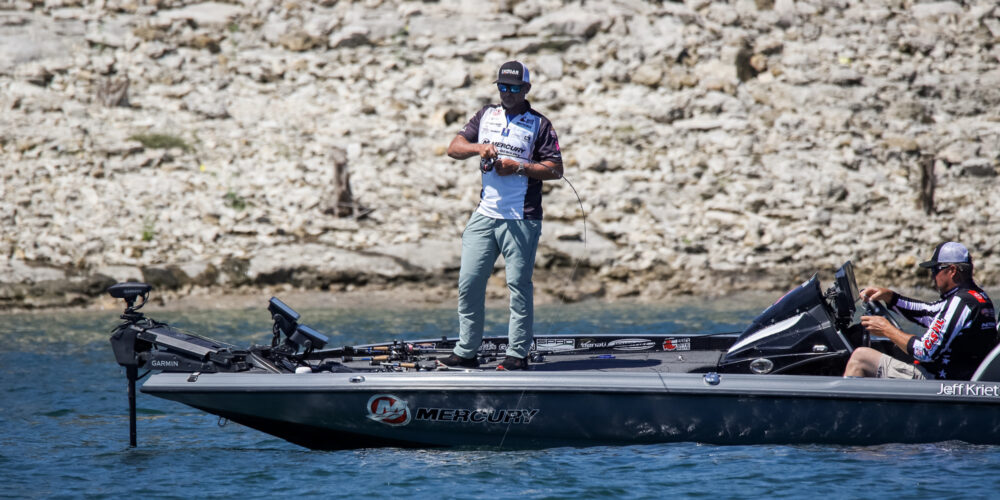 Mercury pro Jeff Kriet loves the floating worm. In fact, he loves it so much he’d prefer if other anglers didn’t even throw it. The simple (and often overlooked) floating worm has kept Kriet afloat (pun intended) in many tournaments over the years.

“Seriously, the floating worm is by far one of my favorite lures to use,” Kriet admits. “I throw it a bunch. It’s crazy how many people don’t throw it. It works so well throughout the spawn and postspawn periods. Actually, it’s almost better postspawn than any other time.”

Most anglers fish a floating worm on spinning gear, but Kriet prefers baitcasters.

“I throw the floating worm on a baitcast setup a lot,” Kriet says. “I use a heavier line on the baitcaster. I spool up with 15-pound Hi-Seas fluorocarbon and use a 7-foot medium action Denali Lithium rod to fish it. It’s subtle, but still powerful, especially if you’re fishing water with big bass.”

Kriet prefers a 4/0 Gamakatsu G-Finesse Hybrid worm hook, but his setup takes an interesting twist in the swivel and leader.

“I use a very short leader when I fish the floating worm,” Kriet says. “It’s only 6 or maybe 8 inches. I connect that to the mainline with a SPRO Power Swivel. The short little leader and swivel prevent the line twist. By having the short leader and that swivel, it lets me really pop the worm. When I pop it, I want it to come to the top, then the swivel weight will pull the worm down, out of sight.

“Most of the bites come after you kill the retrieve and the worm is out of sight.”

Kriet primarily uses a Big Bite Baits floating worm in Merthiolate or pink. Merthiolate is his choice when there’s cloud cover or a little bit of rain. Pink is his choice when it’s clear and bright, and he fishes it around shallow weeds, wood, dark spots in the water, possible spawning beds, any cover that may have a fish.

“Those little isolated targets, probably where there is or was a bed, those are great spots to throw,” Kriet says.

Fish tend to react quickly to a floating worm, which is why it’s one of Kriet’s go-to tools in a tournament when the conditions are right.

“The floating worm is the one bait I can tell whether or not the bass are on it or not,” Kriet says. “If I’m fishing a prime area for the spawn period, they just let you know quickly. When the floating worm is on, the bite is as good as anything. I can cover water fast with a floating worm.”

“People don’t throw it as much as a ChatterBait or a beaver,” Kriet says. “Bass just don’t see the floating worm as much as other baits. It can catch numbers fast, and it can catch big fish, too.”