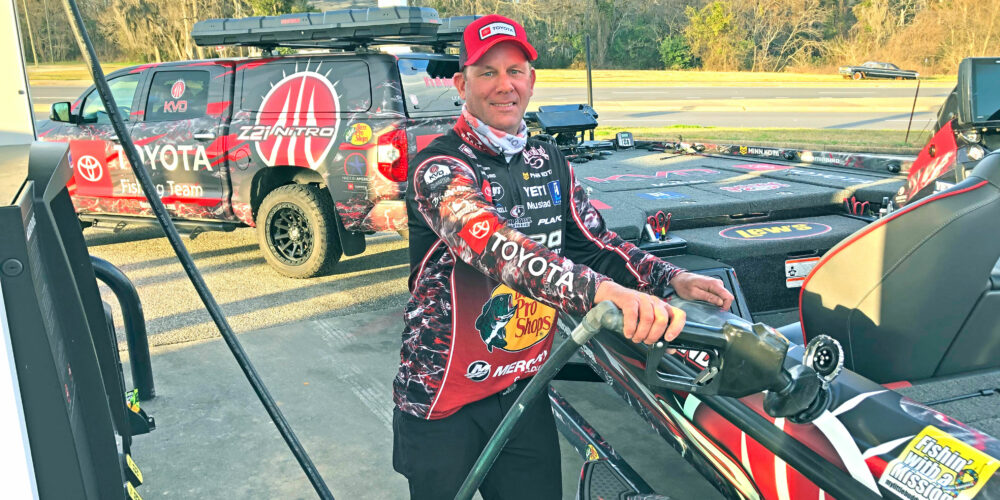 Editors Note: This is the second of a series of short daily accounts of Kevin VanDam’s REDCREST event this week as told to Alan McGuckin of Dynamic Sponsorships.

In fact, he exceeded his goal by catching 20 pounds to land in sixth place to begin Tuesday’s second day of competition. He deemed Monday’s catch worthy of a cold beverage and pork tenderloin on the Traeger Grill for dinner.

“Since I’m staying alone at a buddy’s lake house, it’d be easy to grab a burger at a drive-thru window on my way back from the lake, but that’s not my style, I love to grill good food,” VanDam says.

Grilling and chilling occurs at least once weekly back in Michigan when he’s not on the road. Roughly 25 VanDam family members gather every Sunday afternoon at his mom and dad’s lake house on Pretty Lake.

“Over the years we’ve collected five different grill and frying apparatuses at Dad’s house, and trust me, we use ‘em – we’ve got a big family,” VanDam says with a smile.

A ‘family first’ guy to the core, far greater than celebrating his 20-pound catch, was the chance to smile knowing his dad had been released from the hospital after a battle with pneumonia. And his twin sons, Jackson and Nicholas, have grown to be two great guys as they celebrated their 24th birthday on Monday.

His plan for Tuesday was to spend a lot of time slinging a 3/8-ounce Strike King Thunder Cricket in less than 4 feet of water. He’ll alternate between white and green pumpkin, and says the biggest mistake anglers make when throwing a vibrating jig is using the wrong rod.

“A vibrating jig throws off so much vibration, that if you’re using a pure graphite rod you have a tendency to feel a little too much and pull it away from a lot of bass. I use a composite rod with a lot more flex in it, and I catch everyone that bites it,” VanDam says.

His go-to rod is a Lew’s 7-foot-1 CC3, and his biggest bass on Monday weighed 5 pounds. With the moon already 85 percent full and lots of 72-degree weather coming to Eufaula this week, VanDam is licking his chops at the promise of another 20-pound day like an Auburn Tiger nose tackle slobbering over a juicy pork tenderloin.