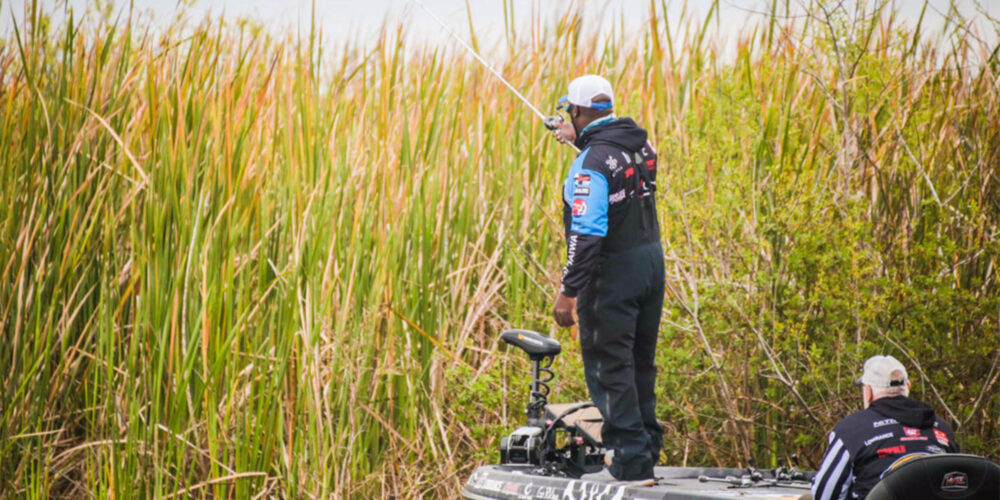 Every angler fishing the Bass Pro Tour is more than capable of punching thick vegetation and catching bass, but some live for it and have built careers with the help of this technique.

One of those anglers is California’s Ish Monroe, who, given a choice, would pick punching over most other techniques.

Just about anything that forms a canopy on the surface is an option to punch through, but vegetation is the most common. Monroe has learned that not all grass is created equal, and he will change his approach based on the grass in front of him.

Monroe said both of these aquatic vegetation species could be grouped because of their similarities and how he attacks them.

“I’m looking for areas where it’s topped out and matted on the surface,” Monroe said. “It creates a canopy with little strands of grass coming down.”

When Monroe mentioned this type of vegetation, his voice perked up considerably.

“Nothing beats hyacinth,” he said. “It’s a leafy bulb that goes down around 6 inches, and everything below it is open. It’s perfect for punching.”

This is an invasive grass and covers much of Florida, as well as many other Southern states. Monroe will fish it because bass will use it, but he’s also not a fan of it.

“It’s a stiff grass, and you lose a bunch of bites,” Monroe observed. “It lowers my hookup percentage to around 60 percent, but sometimes you have to be punching it to get bit.”

There isn’t a wrong season to be punching grass if the opportunity is there, but Monroe will change what he looks for based on the time of year.

“In the spring, you want to be near the spawning flats,” he said. “In the summer, I look for the deeper grass and mats with more of a canopy beneath them. The fall is all about finding baitfish and looking for places to punch close to where they’re feeding.”

As the water cools, Monroe switches gears and looks for brown grass that indicates it’s dying.

“The darker color absorbs the sunlight and keeps the warmth,” he said. “Plus, it’s more sparse, and that helps to bring sunlight in. A one- or two-degree difference for bass in the winter is huge. It’s like me sitting inside a cold house during the winter and then bumping up the temperature a few degrees: it makes it much more comfortable.”

Because of Monroe’s prowess with this technique, it makes sense that he has a signature series of products, and one of those is the 8-foot heavy Daiwa Tatula Elite Punchin’/Flippin’ rod that he pairs with a 7.1:1 Daiwa Tatula Elite Pitch/Flip reel. He prefers to spool it with a 65-pound Maxima Ultragreen Braided Line.

He’s pretty simple when it comes to soft plastic baits and will either use a Missile Baits D Bomb that he rigs on a 5/0 or 6/0 River2Sea “Ish Monroe” New Jack Flippin Hook. He’ll also mix in more compact Missile Baits Craw Father and go down to a 4/0 hook.

When it comes to tungsten weights, he uses anywhere from a 1-ounce to a 1 3/4-ounce River2Sea Tungsten Trash Bomb Weight.

“Always use the lightest weight you can get away with and still punch through the cover,” he advises.

Ish Monroe has a reputation for big fish techniques, and punching plays right into his wheelhouse. He’s especially excited about the 2020 Bass Pro Tour season and the lakes on the schedule.

“It very well could be a punching rod kind of season,” he said.