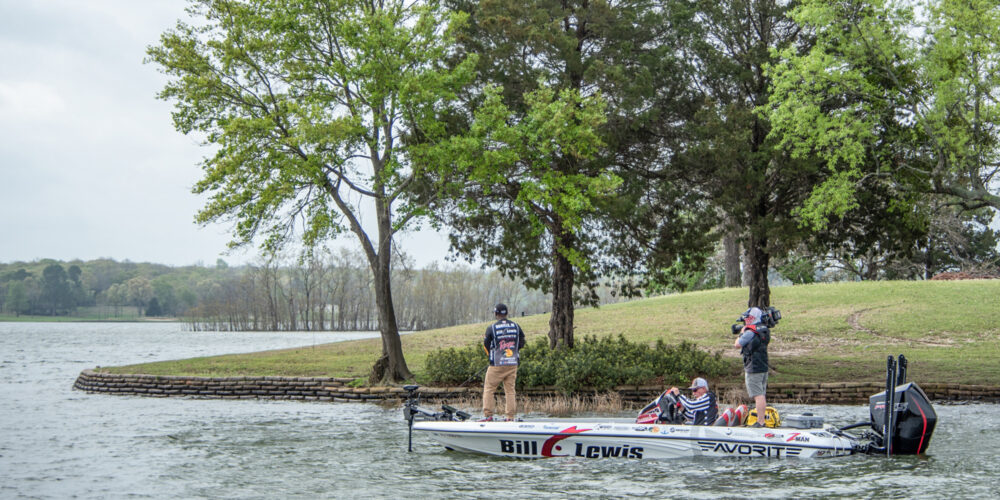 Springtime is a season of movement for bass as they transition from winter mode to prespawn, and eventually to full-out spawn. Mercury pro Mark Daniels Jr. starts his process of locating concentrations of mobile springtime bass with some good old map work to identify the right locations.

“The first thing I look for are obvious spawning areas on my Garmin maps,” Daniels says. “Look for areas that will get the most sunlight, are out of heavy current, and are least impacted by inclement weather. That’s the starting point.”

“First, look for where fish winter— think deep water,” Daniels says. “Then, locate that shallower water close by where they’ll likely spawn, and then follow the navigational pathways the fish use to move from deep to shallow and back again.”

Prime locations will include bays, cuts, or creeks near deep water (remember, “deep water” is relative to individual fisheries). Then, find points and other structure between the deeper water and the shallower spawning ground.

“Those obvious pathways are things like creek channels or long deeper points that gradually taper to shallower water,” Daniels says. “Bass use these paths and so should an angler. You can literally follow their movements by following these pathways where bass eventually move in to spawn.”

“The number one factor in the spring is water temp,” Daniels says. “It’s huge, huge, huge! In spring, bass are instinctively triggered by the length of the day and how much daylight there is. They know spring is coming. What holds them back is water temperature.

“Once that temp moves to the mid-50s, start checking secondary points on the way to spawning areas. Those areas are like a bus stop. Once the water is in the upper 50s, the bass load the bus and they start to slide up to the banks to spawn.”

Daniels uses a handful of go-to baits as he follows the bass bus from deep to shallow water.

“I’m partial to using a Rat-L-Trap in the spring,” Daniels says. “You’ll catch bass as they move up in transitional spots and also during postspawn times. The only time it’s not effective is when they’re locked into spawning. It’s the perfect ‘brother-in-law’ bait. Just tie it on and cast it, bro.

“You also need to have a jerkbait. That twitch-twitch-pause catches all of them, except, again, when they’re locked down and spawning.”

Daniels’ springtime list isn’t complete without a bait he’s helped bring back into the spotlight in recent years – the humble floating worm – and a craw.

“My final choices are a floating worm or pitching a Z-Man Turbo Crawz,” Daniels says. “I’m torn between both, but either is an excellent choice. A bubble gum or Merthiolate-colored floating worm is awesome. It’s been around for decades and still works.

“Check out my Mark Daniels Jr. YouTube channel. I published a video called ‘When, Why and How? Floating Worms.’ Shares a lot of information to help anglers use floating worms for bass.”

One final word about springtime bass applies throughout the year for catching bigger fish, according to Daniels.

“I think time of day matters a lot,” he says. “If you want to catch big fish, you need to be on the water at first light. Big fish are leery and opportunistic feeders. They often feed at night, so lower light really helps. I don’t care if it’s freezing. Pre, post, and spawn, that first hour of light is where it’s at for big bass. The biggest are night feeders, but during the spring, you can get them. Get out and get the first-light bite.”