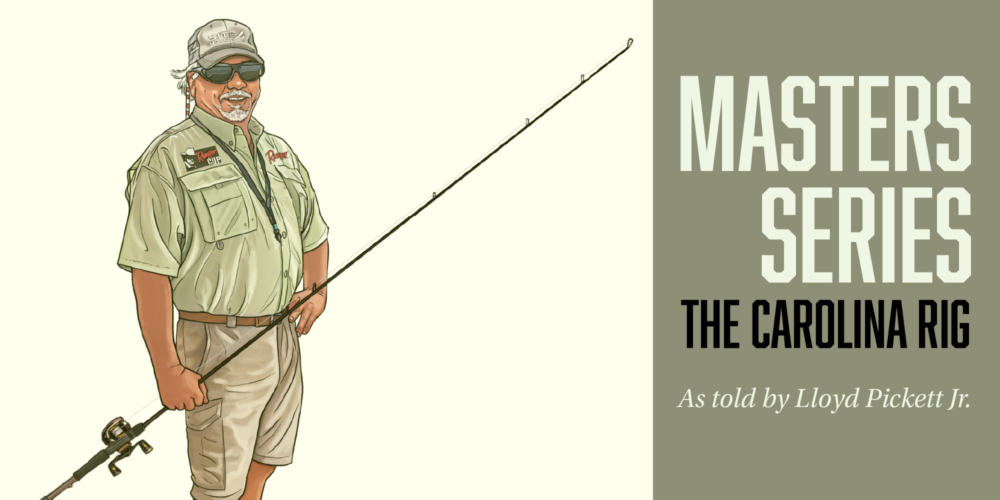 I started getting serious about bass fishing in the late 1980s. I was fishing a lot of jigs and Texas rigs – and having pretty good success – when Bill Price and my father-in-law, Preston Davis, began my education on the Carolina rig. It appealed to me right away because I was getting a lot of bites on it.

I consider it a finesse technique because the bait is separated from the weight and acts a lot more naturally than a Texas rig or jig that might just sink into the mud. To me, the Carolina rig was and is the ultimate finesse tool. I can fish it at any depth. I can fish it fast or slow. I can use it to throw baits of any size, and it catches big bass.

The Carolina rig is a terrific fish-catching tool 12 months out of the year, but if I had to pick one season when it’s at its best, it would probably be summer.

Over the years, I’ve won five Phoenix Bass Fishing League events, two Toyota Series events, qualified for eight All-Americans, won five boats and taken home more than $500,000 in prize money. I’ve had Top-10 finishes all over the country, and the Carolina rig deserves credit for almost all of it. It’s my go-to method, and you’ll never find me on the water without several rods set up with Carolina rigs.

The Carolina rig is a terrific fish-catching tool 12 months out of the year, but if I had to pick one season when it’s at its best, it would probably be summer. When surface temps reach the upper 80s, bass generally won’t chase their food. They’re stressed from high temperatures and low oxygen.

A big, slow-moving bait is usually just the thing to get them to bite. But the Carolina rig catches bass all year long in all kinds of waters and at every depth. In fact, the only time I wouldn’t recommend a Carolina rig is when you’re targeting fish that are suspended well off the bottom.

I’ll throw a Carolina rig in a foot of water or 35 feet of water. I throw it in vegetation, in brush, around rocks, on points, on flats – anywhere I think there are bass. But if I had to pick one type of structure where the Carolina rig is at its best, I’d say it’s on ledges and drops. I like to work the rig up to the edge of ledges and drops and then “kill” it. The bait will settle slowly next to the structure or any cover that’s there, and you can bet bass are looking at it. They can hear that big weight dragging across the bottom, and then they see the lure. It’s usually too much for them to resist.

When putting a Carolina rig together, I start by threading a round, red 5mm glass bead onto the line. Next is the sinker, followed by a red 8mm bead and then the swivel. Not many anglers start with a bead, but I think the 5mm bead helps to protect the hole in the lead sinker.

I like a really long rod for my Carolina rigging: a 7-foot-11 “Ball and Chain” extra-heavy-action casting model from Muddy River Rods. They’re made by my friend Jeff McLain, who fishes the Toyota Series, and the Ball and Chain has a fast tip to help increase casting distance. I pair it with a Shimano Curado (6.2:1) spooled with 15-pound-test Berkley Big Game monofilament. My leader is 12- to 15-pound Big Game most of the time, but if the water is extremely clear, I’ll use fluorocarbon.

You might be surprised to hear that I like to use mono for my Carolina rigging, but there’s a reason for that. Mono sinks slower than fluorocarbon, and that gives my baits a better action and keeps them in front of the fish longer.

My sinker selection is pretty basic. I use two weights and two styles. About 99% of the time, I’m using a 1-ounce sinker. If the bite is extremely finicky, I’ll drop down to 3/4-ounce, but the weight of the sinker usually isn’t critical since it’s not in direct contact with the lure. No matter the weight, I use lead sinkers – not tungsten or brass or anything else. I’ve been using lead for so long that I have a feel for it, and if I were to change now, I’d have to re-learn that feel.

In grass, I like a bullet-shaped sinker because it comes through the vegetation better, but for most of my Carolina rigging, I use egg-style sinkers. For me, the egg sinker comes through rock and brush better than the traditional bullet sinker.

When putting a Carolina rig together, I start by threading a round, red 5mm glass bead onto the line. Next is the sinker, followed by a red 8mm bead and then the swivel. Not many anglers start with a bead, but I think the 5mm bead helps to protect the hole in the lead sinker. Without the bead, if the sinker is banging around on rocks, the hole can close up and damage your line. Also, the bead in front of the sinker helps to make a little extra noise.

My hook is a Gamakatsu offset round-bend model. I like a 2/0 for the small creature baits I use, and a 4/0 for the bigger creatures and big worms. I’m not too picky about my swivels – most are more than strong enough for this kind of fishing – but I do like a black swivel.

One of the most important considerations in Carolina rigging is leader length – the length of line between the swivel and the hook. I generally like a long leader. My average leader is about 3 feet, but I’ll go twice that long sometimes when fishing ledges or drops or when I need an extremely slow presentation. And I’ll shorten my leader to just a foot or two in current. When there’s current, it can cause your lure to swing a lot and put you in an awkward position for setting the hook. A shorter leader keeps me more in control of my presentation in current.

In the late winter and early spring, I like the small creature bait. After the spawn, I use the big creature and big worm. My favorite colors depend a lot upon water clarity, and I usually go with translucent colors like watermelon and watermelon candy in clear water, green pumpkin or junebug in stained water, and junebug or blueberry in dirty water.

For me, a basic presentation with a Carolina rig starts with a long cast. I think a long cast is important because it gets the lure away from the boat, away from any sonar “pinging,” and it keeps them from being unnecessarily spooked.

As soon as the bait hits the water, I start to count it down. It’ll sink at a rate of about 2 feet per second. Once the rig hits the bottom, I’ll take up any slack and put myself in direct contact with the sinker. That’s critical; you never want to lose contact with the weight.

I hold my rod tip at about 10 o’clock, and I face where my line enters the water. I slowly drag the sinker by moving the rod to my right (I’m right-handed). Each pull moves the sinker about 2 feet across the bottom. I generally fish faster in shallow water where there’s more light and the fish can probably see the bait better and slower in deep water, but you have to figure out what they want every time out. Generally, I believe a slow retrieve is best.

I always drag the sinker. I don’t hop it. I want it to come into contact with everything on the bottom, and when I feel it hit something like rocks or brush or anything different, I slow down or even stop. That’s when you’re most likely to get bit.

When I get a strike, I use the length of my rod to sweep the hook into the fish. That’s another place where the long rod is a big advantage.

The biggest mistake I see from anglers throwing a Carolina rig is that they fish it too fast. Most often, another angler in my boat will make three casts to my one, but I’ll catch a lot more – and a lot bigger – fish. I have a saying: The longer you leave the bait in a spot, the bigger the bass is going to be.

I think that’s one of the reasons that traditional power fishermen have trouble with the Carolina rig. They can’t slow down enough to be effective with it. Finesse anglers, on the other hand, understand that slower is usually better.