MERCURY KEYS TO VICTORY: Expect a Shallow, Active Bite at Lake of the Ozarks 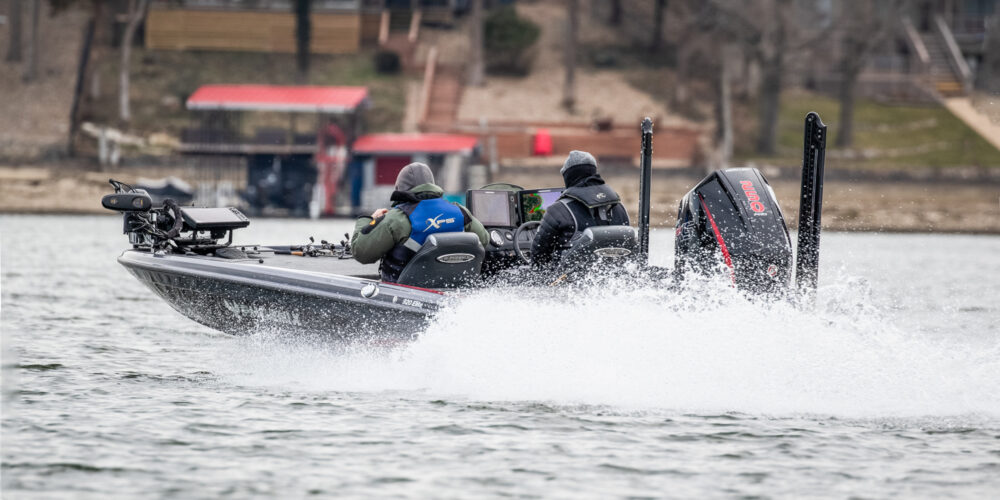 The word “legendary” is used a lot in bass fishing, but in the case of Lake of the Ozarks – site of the upcoming Bass Boat Technologies Stage Four Presented by Bass Cat – the term fits.

“LOZ” as it’s sometimes called has hosted high-level bass tournaments since the early 1980s (and was even name-dropped in the ‘Fishing with Roland Martin’ theme song). But one thing the sprawling impoundment of the Osage River hasn’t hosted yet is a full 80-angler Bass Pro Tour field in MLF’s “every scorable fish counts” format.

To get a feel for how the event is shaping up, Mercury pros Jeremy Lawyer and Andy Newcomb, and local expert Bob Bueltmann shared their insights and predictions for the tournament.

How the Lake Sets Up

LOZ is a big lake with a surface area of over 54,000 acres and 1,150 miles of shoreline. Much of that shoreline is developed, with a seemingly endless number of docks lining the bank, making it one of the best dock-fishing lakes in the country. The massive amount of docks also means plenty of boats and the lake can get quite busy from boat traffic.

Lake of the Ozarks is also known as one of the country’s most popular destinations for non-fishing recreation and hosts a heavy flow of water-skiiers, pleasure boaters and various other kinds of personal watercraft. Consequently, boat traffic is a key factor to consider when the sun is shining in the Ozarks.

The lake was created with the impounding of the Osage River, with the dam completed in 1931. Three tributaries of the Osage – the Niangua River, Grand Glaize Creek and Gravois Creek – make up the major arms of this serpentine body of water. The lake’s size should help spread out the field, with anglers likely to find bass in all sections of the fishery.

Three Missouri pros are in the field: James Watson, Mike McClelland, and Lawyer. All three have experienced some success on the lake, including Lawyer’s 2018 Toyota Series win. That was a fall event, and Lawyer believes the lake’s current late-spring state will erase any local experience edge that he or any other Missouri angler may have.

“The fish should be crawling all over the lake with fish spawning, some guarding fry, and maybe a few post-spawners,” Lawyer said. “Guys will be able to fish however they like and catch fish. Some guys will run up the rivers to find dirty water and some will stick to the cleaner water, but everyone will catch fish and do it fishing what they have confidence in.”

Lawyer expects big catch totals throughout Stage Four with some excellent quality mixed in. He also acknowledges that the Bass Pro Tour field will have plenty of room to move around on the big lake.

“We’ll only have 40 guys at most fishing in a day and they’ll string out all over the lake – you might never see any other competitor all day,” Lawyer said. “Catching 15 bass over 2 pounds each day will have you sitting decent to make the Knockout Round, but it won’t be leading. I think some guys will catch a bunch of fish and feel like they had a good event and still miss out on advancing.”

“It was a cold spring, but it’s setting up great for fishing with the weather leading up to (Stage Four),” Newcomb said. “There will be quite a few bedding fish, some that are done spawning and some waiting to spawn – all of them will still be shallow. If I were fishing this event, I’d be fishing shallow with something that you can fish fairly fast: a wacky worm, floating worm or popper.”

Because of the sheer size and diversity of the fishery, LOZ’s bass are likely to be in different “moods” throughout, depending on which end of the lake an angler chooses. Newcomb believes that spinning rods will be a common sight during this event.

“If a guy wants to sight fish, the lower end or the Gravois arm will be the best places to do it,” he said. “Up the Niangua, they’ll find much dirtier water and fish that are postspawn and guarding fry because it warms up much faster. The thing about this lake is that it’s all good; all 92 miles of it have potential. The guys that are good with a spinning rod will do well and catch a lot of fish. The wacky rig will definitely be a big player in this tournament.”

For Lake of the Ozarks, Bassingbob.com is the place to go for fishing reports, tournament results, news and everything related to bass fishing on the lake. Site owner Bob Bueltmann keeps tabs on the lake daily, fishing and creating frequent status reports, and he believes things are setting up nicely for Stage Four.

“Right now, the fish are very close to spawning on most of the lake,” Bueltmann said. “Some are on beds, but I think the biggest wave will be coming in right after this event. It should be a true prespawn event with fish close to the bank in pockets and on the main lake. I believe some fish stay out on the main sections of the lake all year long.”

He reports that most water temperature readings are in the mid-50s to low-60s, pointing to some excellent fishing.

“Fish are further along up the river because it’s shallower and dirty water,” he said, confirming Newcomb’s observations. “I believe some anglers will want to run up there based on what I see watching the Bass Pro Tour and the styles of some anglers. The lower end of the lake is more clear and that’s where most anglers tend to gravitate to because of all the docks, but the fish should be in shallow water across the lake. Even if we get a cold front coming, they’re committed and ready to spawn.”

Lake of the Ozarks is a popular host to regional events, including a massive big bass tournament April 23-24 that had more than 3,000 entrants and paid 45 spots for each hour block.

“The weather was horrible during that event and the big bass weights were still very good,” Lawyer said. “It took at least fish in the 4-pound range to get a check time slot and there were several sixes and one over seven. That’s typical here, the lake’s full of 3- to 5-pounders.”

Bueltmann assisted with the event, interviewing winning anglers and noticed some themes among the top big-bass winners.

“The dominant baits were spinnerbaits, ChatterBaits and crawfish crankbaits like the 6th Sense Curve 55 and SPRO RkCrawler,” Bueltmann said. “They also caught some nice ones on bottom baits like jigs, tubes, creature baits, and Carolina rigs. The entire lake fished good in that event and there was a consistent bite no matter where you were.”

“That all starts around Memorial Day and you better be off the water by 9 a.m. if you’re fishing Lake of the Ozarks then because it gets crazy,” Lawyer said. “I think that’s what’s kept Lake of the Ozarks so good because you can hardly fish it the whole summer and the fish don’t get that much pressure.”