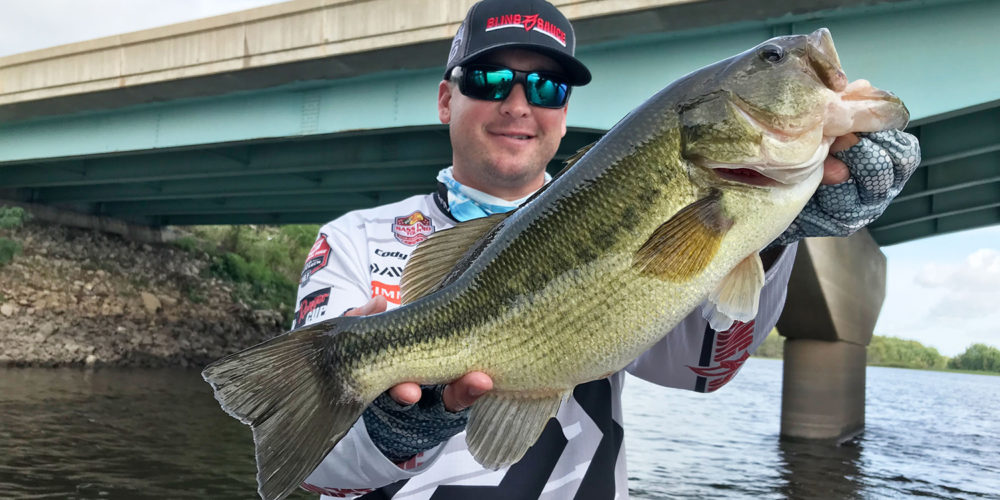 Cody Meyer says that it's time to break out a buzzbait and walking bait for the biggest topwater bites of the year.
September 30, 2019 • Joel Shangle • Bass Pro Tour

As soon as Cody Meyer stepped off the plane in Sacramento – just home from a competition in sweltering Oklahoma – he could feel it in the mid-60-degree air: “Time to start looking for the biggest topwater bite of the year.”

Like all bass anglers, the Daiwa pro looks forward to the start of the fall cool-down like a child looks forward to Christmas morning. Longer, cooler nights steadily bring water temperatures down, causing a chain reaction of bait and fish movement that opens a window of aggression for largemouth bass that can last well into November.

Meyer Starts with a Buzz

Meyer’s first option for a fall topwater bite is almost always a buzzbait – specifically a 3/8-ounce Strike King KVD Toad Buzz – fished around shallow cover. He’ll put his trolling motor on high and fish fast over dying grass, and around laydowns and docks, covering as much water as possible.

“The Toad Buzz shallow is always my first approach,” Meyer admits. “That’s where I’ll start my day 100 percent of the time in the fall.”

Meyer favors the skirtless Toad Buzz over a traditional skirted bait around shallow cover for two reasons: the horny-toad style Gurgle Toad trailer provides action and profile with its two kicking J-shaped legs and solid Perfect Plastic body, and the flat shape of the body makes the bait easy to skip under and around tight cover.

“The Toad Buzz with the Gurgle Toad body lets you fish it in places you can’t fish the old traditional buzzbait with a skirt that we’ve all thrown for years,” Meyer says. “You can throw it over grass like you would any other buzzbait, but when you come to a laydown or an overhanging bush or a dock, it’s an easy bait to skip. You can get it under a dock where you normally can’t throw a buzzbait, so your chances of catching a fish are way better. And I’ve found that the Toad Buzz catches big ones. It’s such a different look to a fish – it has a lot more action than a skirted bait and more of a solid body, so it looks more like a profile of forage.”

Meyer sticks with straightforward colors for the Gurgle Toad trailer: white when he’s fishing around shad, black when the water has some color.

Once Meyer has thoroughly fished the best shallow cover, he’ll put the buzzbait down, move offshore and pick up a 7-foot-2 Daiwa Tatula Elite Brent Ehrler Small/Medium Crankin’ rod armed with a Carolina Chrome or Bone Strike King Sexy Dawg. That’s a bait that Bass Pro Tour fans have seen Meyer use with great efficiency: he made up a 20-pound deficit in the Knockout Round of Stage Six on Table Rock Lake, weighing 25 fish in the final hour of the day (all on a chrome Sexy Dog).

“In most lakes and reservoirs, fish are tight to cover in the morning, but then move off points as the day goes on,” Meyer says. “At this point, you’re looking more for schools of fish, and a walking bait is the best way to cover as much water as possible. I choose the chrome Sexy Dog because it looks like a big baitfish: it could be a gizzard shad, it could be a blueback herring, it could be a shiner. Fish come up high in the water column in the fall – they’ll get right below the bait and use the surface to more or less ‘trap’ them there using the surface as a hard line. I’m throwing the chrome Sexy Dog in high sun because it just looks more natural and flashy, like a shad, and maybe throwing white or bone when it’s overcast.”

Meyer’s rod and reel setup for the walking bait is the same Daiwa 7-2 rod, but with a 7.1:1 Daiwa Tatula Elite reel, which was designed specifically for increased casting distance. He prefers 50-pound Daiwa J-Braid with a 2-foot fluorocarbon leader.

Once Meyer has exhausted the bite with the walking bait, he’ll frequently finish up with a Strike King KVD Pop. It’s a slower presentation that Meyer says will sometimes convince a few more fish to bite.