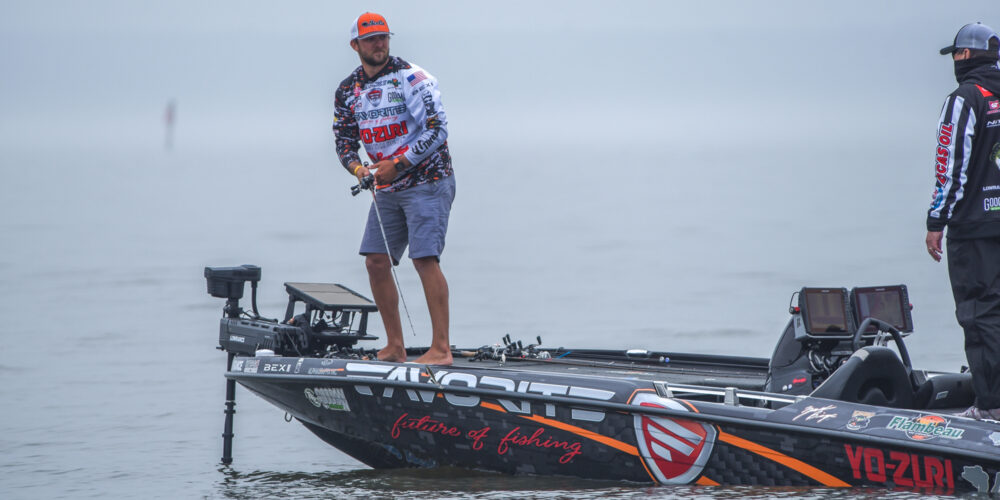 EUFAULA, Ala. – The Championship Round at REDCREST presented by Old Wisconsin Sausage started much differently than the previous four days of fishing.

Just short of halfway through the final day, nobody has run away with the lead, and most of the field has a legitimate chance to catch fire in the afternoon and take control of the REDCREST trophy and $300,000 payday.

Zack Birge is on top of SCORETRACKER® as of this writing, but he’s jockeying in and out of the lead with Dustin Connell and Jacob Wheeler (with Michael Neal lurking). All four have been focusing their efforts on offshore brushpiles, which isn’t all that surprising considering what we’ve seen on Lake Eufaula all week.

Birge Mixing it Up

Birge has been rotating quickly between different locations, varying his lures. He plans to do the same thing for the rest of the day.

“I’m going to keep doing what I’m doing and making these circles,” Birge said during the first period break. “There is plenty of fish in my area and I can see them with my Lowrance ActiveTarget. It’s just a matter of rotating and landing on them when they want to bite.”

Birge has posted consistent catches each day this week and thinks the morning bite today has been the best fishing he’s seen so far.

“The bite is better and the fish seem to be more active than they have been all week,” Birge shared. “I see a lot more fish following my bait and more moving around the brush. There is also more baitfish activity.”

His goal is to catch 15-pounds a period and is rotating between three different lures.

“If I can catch another 15 or more in the next two periods, I think I’ll be alright,” Birge said. “I’m using the spinnerbait that I’ve been catching them on all week. My two biggest have come on the spinnerbait and I am also using a jerkbait. So far, I’ve only caught little ones on the jerkbait, but I am seeing groups of them following it in and I haven’t seen that all week.”

Thrift on the Run

Bryan Thrift has lapped the field all week fishing brushpiles on the south end of the lake near the dam. He’s caught fish in other areas, but his main area has produced plenty of fish with a combination of a shaky head and swimbait.

Today, he gave his spot exactly one hour to start the day and only had a single bass weighing 4-7. That fish came six minutes into the day and he went cold since then.

After his hour was up, he was on the move, running to other areas, making several casts and then moving to the next until the break.

The North Carolina pro mentioned to the camera that he was worried his offshore spots might be changing due to the weather.

While Birge, Wheeler, Connell and Thrift continue to focus on offshore brushpiles, David Dudley believes he may have a shallow pattern figured out. Dudley has spent the majority of his morning fishing a wacky-rigged worm around boat docks, a strategy that has paid off so far with three bass for 8-5.

The Virginia pro is starting to get the feeling that the bass are heading to the bank, both male and female. If his pattern can hold true throughout the rest of the day, watch out for Dudley to make some noise in the afternoon periods.