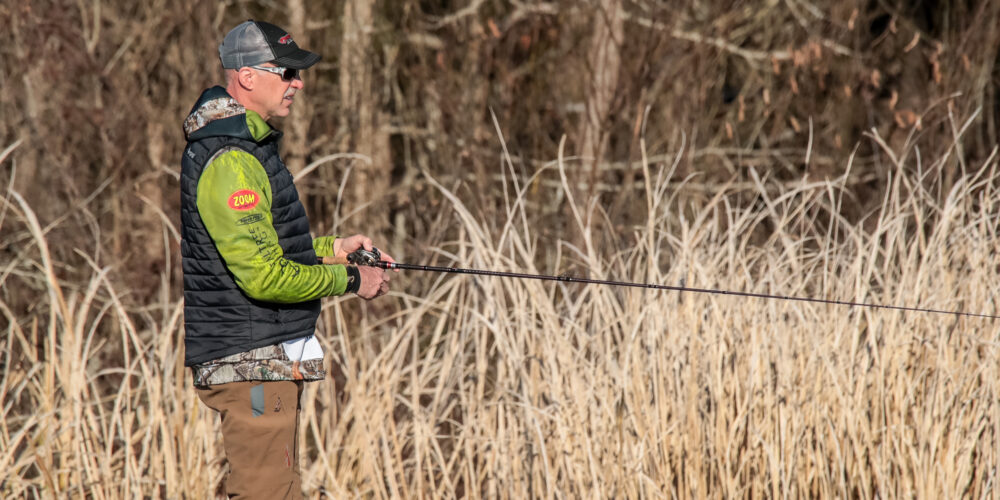 EUFAULA, Ala. – From one end of Lake Eufaula to the other…

A healthy percentage of the field has committed to the bottom end of the lake – more than half of the 40 anglers fishing REDCREST Presented by Old Wisconsin Sausage have spent the first two days fishing from Pataula Creek down.

Ott DeFoe, Jacob Wheeler, Zack Birge, Randall Tharp, Adrian Avena and a handful of others working all the way down toward the dam. There’s a reason why: the water seems to be a little clearer here.

There’s a small group of anglers who have gone as far in the opposite direction up the Chattahoochee River as possible: Brent Chapman, Edwin Evers, Justin Lucas and Jared Lintner.

Some anglers (like DeFoe) are more in scouting mode, while some are still on the hunt to make their way above the Toro Cut Line. It’s a mix of anglers targeting offshore brushpiles, some working the bank, and some fishing around cypress trees.

Andy Montgomery made an early surge with 17-9 in the first hour to climb well away from the Cut Line, and made the comment to MLF photographers as he strapped his rods down: “I’m good for the day, let’s go see what else we can find.”

MLF reporter Mason Prince caught up with Andy Morgan at the end of Period 1, and despite Morgan’s spot in the top five, the Tennessee pro wasn’t too pleased with how his morning went.

“It’s dang slow right now,” Morgan said. “I’ve gotten two bites all day and only got one of them in the boat.”

Morgan brought in a 5-12 for his only fish of the morning so far. He was able to get that fish to bite a jig with less than five minutes left in the period. He was working along some reeds and has been for a majority of the morning, but that’s not necessarily his plan for the rest of the day.

“At this point, all I’m doing is stopping at something that looks good,” Morgan outlined. “That 5-12 really secured me in my spot in the next rounds. Now I’m just going to start looking for things I can try to do over the next few days to win because what I’ve found so far isn’t gonna win this thing.”

The Favorite Fishing pro plans on spending the rest of his day trying out some different baits and looking for different targets while also keeping an eye on SCORETRACKER®.

“I’m not really worried about missing the cut, but you never know in MLF,” Morgan said with a chuckle. “I can’t ever get too comfortable out here because that’s when you start getting yourself in trouble.”

Morgan had entered the morning in fifth place with seven largemouth for 23-3. He began his second day of REDCREST 2021 working reed edges, sharing a small creek in the midsection of Lake Eufaula with Jacob Powroznik. Morgan has alternated throwing a chartreuse/white vibrating jig with a white paddletail trailer and punching a brown jig through a few patches of matted vegetation.

As is usually Morgan’s habit, he spent the first half of the day hustling down the bank, but he’s since headed upriver to explore some new bank.