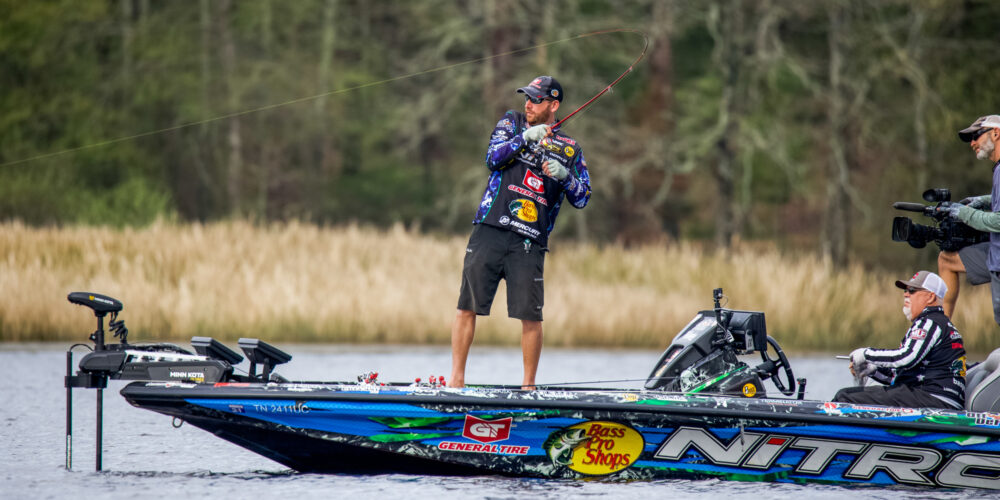 Ott DeFoe shares the successes he's had in Texas and why fishing the state is so similar to his home waters in eastern Tennessee. Photo by Jesse Schultz
January 13, 2021 • Dave Landahl • Bass Pro Tour

Texas is a bucket-list destination for any bass angler and Mercury pro Ott DeFoe has seen a lot of success there over the years. Just last year, the Tennesee angler won the Bass Pro Tour event held on Lake Fork and Lake Athens. So, while he’s not a native of the Lone Star State, he’s got plenty of reasons to look forward to heading there next month for REDCREST on Lake Palestine.

“Since I’ve been a professional angler, I’ve always loved fishing in Texas,” DeFoe says. “My first FLW Tour event was on Lake Travis, I finished in the Top 10. I had a Top 10 at the Classic on Lake Conroe, I won the Bass Pro Tour event on Lake Fork and Lake Athens, and have cashed a lot of checks in that state over the years. I do well there, I’m always consistent.”

So, why does Texas fit DeFoe so well? It has something to do with the waters where he grew up and learned to fish for bass.

“There are certainly some similarities in the fisheries in Texas to where I grew up,” DeFoe says. “Texas fisheries are quite diverse. Places like Sam Rayburn and Toledo Bend remind me of Douglas Lake in Tennessee, at least the flatter parts of it. Lakes like Whitney and Travis have a lot of bluffs and rocks and we have a lot of that in eastern Tennessee.

“I think the biggest single difference is we have annual drawdowns in Tennessee. In Texas, the lakes fluctuate a bit with precipitation, but topography is pretty similar in a lot of places. People often think of Tennessee fishing as deep, clear lakes like Cherokee, Dale Hollow, or Norris, but the reservoirs on the Tennessee River offer flatter topography and more dirty water, similar to a lot of the Texas lakes.”

With many years of fishing Texas lakes under his belt, DeFoe does fish plenty of history but he supplements his past knowledge with real-time conditions to zero in on catching largemouth.

“I do go back to look at past history on the places I fished,” DeFoe says. “Then I look at current info, look for baitfish, if there’s a shad spawn, things like that. It’s always a good bet there will be plenty of threadfin and gizzard shad anywhere we fish in Texas, so bait is always important.

“Another big thing in Texas is wind. It’s usually blowing at least some there, moving the water around. Fish set up in the wind and the current generated by that. It’s really important to pay attention day-to-day regarding wind direction. Bass will usually be located where the wind is hitting. This is very similar to eastern Tennessee.”

With all of DeFoe’s success in Texas over the years, there are a few lakes that really get him excited.

“Lake Fork always excites me, it’s a legendary big bass fishery,” DeFoe says. “Lake Athens, the lake where I won the Bass Pro Tour event last year, did not. I didn’t know about it. In fact, I was driving to the event and my wife Jenny and I were having a discussion, and she asked me if I knew that the Championship Round was going to be held on Lake Athens. I did not. I found out while I was driving down there from Jenny. Now, I get excited about Lake Athens.

“Other lakes like Sam Rayburn and Toledo Bend are easy to get excited about – they’re huge, famous, and really good. I get excited and nervous about fishing Falcon Lake for various reasons. One more I get excited about is Lake Whitney. The Altons (Jones Sr. and Jr.) told me about it. It’s an outstanding fishery, and it’s definitely on my list. I filmed an episode of my television show there.”

DeFoe returns to Texas on February 21 for REDCREST to compete for a $300K payday on Lake Palestine. “I’ve never fished there, but from what I’ve researched, it looks like an excellent fishery. There’s a lot to get excited about when you fish for bass in Texas.”