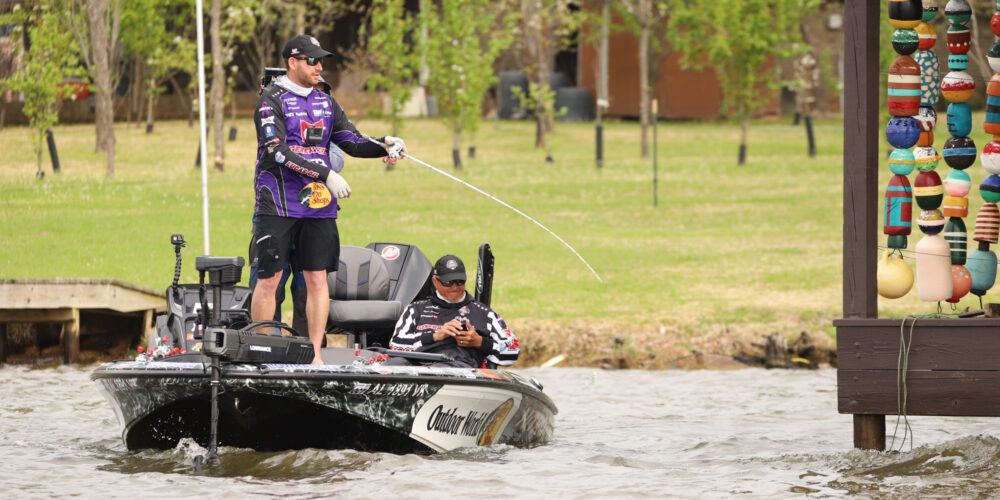 Prior knowledge of a fishery helped Tennessee pro Ott DeFoe bring home the belt at the recent General Tire Heavy Hitters Presented by Bass Pro Shops event on Lake Palestine in Texas. Ironically, it was not prior knowledge of Lake Palestine, since DeFoe had never fished there before. The knowledge came from another one of the Mercury Pro Team member’s wins in the state of Texas: the 2020 Bass Pro Tour event on nearby Lake Fork.

“Going into Heavy Hitters, I had never fished on Lake Palestine before,” DeFoe said. “I looked at it being so close to Lake Fork, a little south of there, actually. I looked at the weather when we were (at Lake Fork) a couple of years ago, and used that as my point of reference to decide how I should start off in practice for Heavy Hitters.”

DeFoe decided to avoid the shallow upper ends of the lake altogether in practice, thanks to his experience on Lake Fork (and his buddy Andy Montgomery’s insight from a couple of years back).

“When we fished Lake Fork, Andy observed that some of the bass were already spawning or done spawning,” DeFoe said. “That was a month and a half earlier in the year than Heavy Hitters on Palestine. Based on those observations, I believed that the extreme shallow-end bass had spawned some already.

“The local weather had been rough with some warm and cool spells. I didn’t believe that the majority of the fish had spawned yet. I believed the biggest wave of spawning bass was still coming to the lower end of the lake, so that’s where I focused my fishing.”

DeFoe focused on the middle to lower portions of Palestine. Practice wasn’t gangbusters for him, but he did notice a shad spawn earlier in the morning. He decided to start his mornings by fishing the shad spawn as he waited for the sun to rise so he could begin sight fishing and targeting individual fish.

“I didn’t have a lot of bites and fishing wasn’t easy by any means,” DeFoe admitted. “I fished some small pockets where I saw six or eight scorable bass around the 2-pound minimum. Then on the second day of practice, I noticed a little shad-spawn activity. That worked out well since I couldn’t really see the bass for sight fishing until mid-morning.”

Entering his first day of competition, DeFoe was confident that his plan to fish the shad spawn early and sight-fish from mid-morning on would work out well for him, but things didn’t go as planned.

“I stuck with a swim jig and a few other baits to start the morning on the shad spawn – I caught 15 bass but only 2 were scorable,” DeFoe said. “The shad spawn wasn’t working very well. When I switched to sight fishing with the Magnum Fin-Eke Worm and a Tokyo rig with a Scottsboro Tackle swimbait, that’s when fishing improved.

“I think I caught the most on the worm, but that Tokyo-rigged swimbait right in front of them really aggravates bedding fish. I believe I caught five scorables just fishing around the cover where I thought bedding fish should be, then another four scorables looking at them and sight fishing.”

The shad became very active on the second day of DeFoe’s Qualifying Round, but DeFoe found that he still needed to see the fish to be able to catch scorable bass. He spent roughly 90 minutes fishing the shad spawn again with very little to show for it before going back to sight fishing.

“I couldn’t get any bites unless I saw them and started working them,” DeFoe said. “It became a game of finding fish and fishing for them. I had to be really methodical. I’d pitch two or three times before I even saw a fish move. Water clarity wasn’t great, it made seeing them tough. Also, the beds had dark spots in the middle along with the cover. It was tough, but once I saw them, I had a chance to catch them. I believe I caught my first 5-pounder on the Tokyo rig. It may have been the only scorable that day not caught on the Fin-Eke worm.”

Riding Out a Slow Bite

DeFoe won his group’s Qualifying Round to advance straight to the Championship Round. After a day of tackle prep and a successful day of turkey hunting, DeFoe was ready to light up SCORETRACKER® on the final day. However, the 3-pound minimum scorable weight for the Championship Round coupled with tough fishing conditions slowed his roll.

“I started the Championship Day and didn’t catch crap,” DeFoe admitted. “It was so slow. Tough to see the fish in the dirty water. I caught four bass that would’ve scored during the Qualifying Rounds, but the variable weight made it tough and kept the entire field in the game all day.”

In the end, persistence paid off for DeFoe, having faith that the later-day bites would come.

“Each day, from the middle of the second period through lines out, was when I experienced the best fishing,” DeFoe said. “I finally caught my first 3-pounder on the Tokyo rig, then alternated with the worm. It was an even split between the two on scorable bass. I caught some throughout the event on gator grass, some off-dock posts, some just on a bare bed.

“I never caught a bass deeper than 30 inches, with almost all being caught in 16 to 24 inches of water. The boat might have been deeper in some areas, not the fish. It was a tough tournament, but I sure love fishing in Texas.”