PATTERN INSIDE THE PATTERN: How Jacob Wheeler’s ‘Ever-Widening Circle’ Paid Off on Champlain 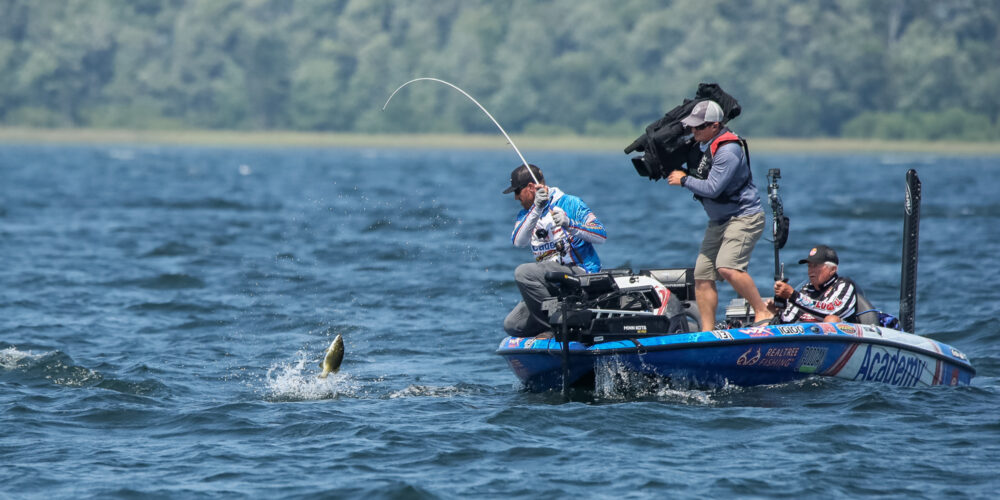 "Forward-facing sonar has always helped, but it never has been the deal. In this tournament, it was." Jacob Wheeler breaks down his pattern inside the Stage Six winning pattern. Photo by Josh Gassmann.
August 16, 2021 • Dave Landahl • Bass Pro Tour

Jacob Wheeler’s third win this season on the Bass Pro Tour was anything but easy – and yet, it wasn’t complicated either. Wheeler used the tried-and-true drop-shot with soft plastics to score smallmouth after smallmouth, but it took him until the second day of competition to figure out what was going on.

Wheeler’s process could be compared to taking a stroll around your neighborhood in an ever-widening circle, and then realizing just how many interesting things you see that you never knew existed close to your home. Wheeler did exactly that on a series of flats on Lake Champlain with the assistance of forward-facing sonar. Wheeler’s ever-widening search pattern and sonar became his primary reasons for winning once again.

“I really fished the areas I was on thoroughly,” Wheeler said. “I wasn’t fishing anything out of the ordinary on Champlain. Just typical stuff there on any smallie lake or river. I’d fish isolated boulders, rock piles, grass patches. The biggest irregularity on the flat is where I’d initially find the fish.

“But, after the first day, it seemed like the bass just moved off the cover, and I’d go to my next spot. Pretty basic, but certainly not enough to win.”

On Day 2 of the event, Wheeler remembered an old mentor’s words, which helped him zero in on what smallmouth were doing on Champlain.

“I like to dummy things down for myself,” Wheeler admitted. “I make everything as easy and efficient as possible, so I fished the basic cover, high-percentage spots. (Fish) weren’t always there, but (I knew) they couldn’t have all left. On the second day, I figured it out. They didn’t actually leave, they just spread out off the cover. Whether it was a boulder, patch of grass, or the best spot I found was a large sunken metal structure. I think it was an old boat lift.

“I decided to troll to another spot and not idle and use my forward-facing sonar to scan. Then, there they were. I cast to them, caught one. I remembered my old fishing mentor’s words: ‘A one-time fish catch is a fluke, but if it happens twice, it’s a pattern.”

When the action slowed, Wheeler headed to another location to test out his possible pattern. Sure enough, the pattern emerged, and Wheeler got to work.

“I trolled between two spots again and there were 10 fish I saw on forward-facing sonar,” he said. “I caught three of them. Well, two times is a pattern and I started going into practice mode fishing around for them. They would use the cover as a home base, but since these are obvious structures, I believe they’ve been pressured a lot. The bass don’t leave the cover totally, but it’s their home base. They just spread out searching for food and getting away from the pressure. That approach worked for the rest of the event.”

Wheeler warns that this type of pattern isn’t always productive when fishing isolated irregularities on flats.

In addition to expanding the fishing zones around the cover, Wheeler rotated baits to “match the hatch” and the mood of Champlain’s smallmouth.

“There wasn’t one color, style, or line size that always worked,” Wheeler said. “I used several different baits and colors and hues. A Googan Baits Rattlin’ Ned in smelt, green pumpkin, and goby. I threw a couple of Ned-style baits, a fluke-style bait. All on drop-shots. If alewives were in the area, I used colors similar to them. If it was perch, I’d switch to perch colors, pretty simple. I’d rotate between the baits, with darker colors working better earlier and the more translucent during the brighter hours.”

Wheeler also made small adjustments to his line size.