PATTERN INSIDE THE PATTERN: Kevin VanDam’s Cranking System Carried Him to Win on Chickamauga 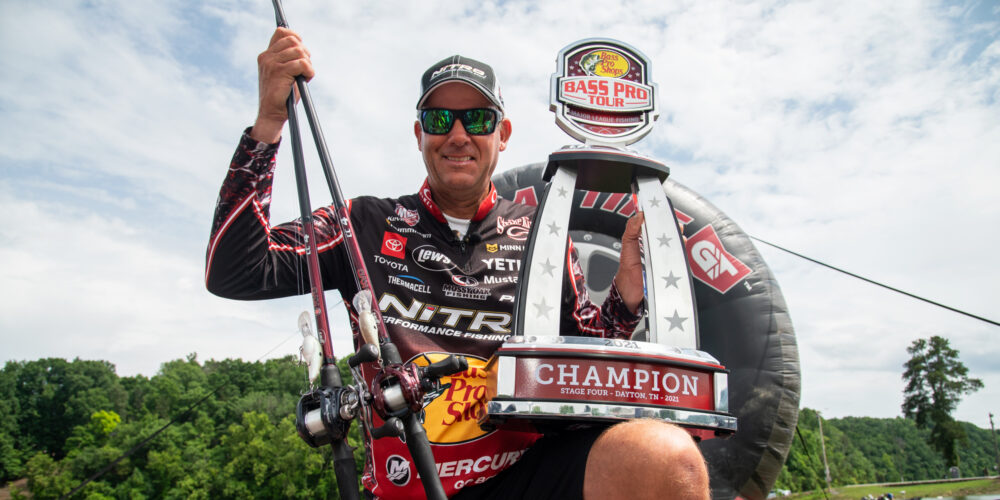 A system is an organized collection of parts or subsystems that are highly integrated to accomplish an overall goal. Whether that system is used to run a business, manage a pro sports team or catch largemouth bass, systems work thanks to hands-on experience.

In Mercury pro Kevin VanDam’s case, learning the nuances of fishing reservoirs and river systems such as the Tennessee River and the Tennessee Valley Authority (TVA) lakes over decades of trial and error have helped him hone a system of effective fishing when the bass position on ledges.

VanDam’s recent win at the MLF Bass Pro Tour Stage Four on Lake Chickamauga cemented what many in the sport already knew: KVD is “The Man” when it comes to busting bass on ledges.

“My cranking system for ledge fishing is something I’ve developed over many, many years of trial and error,” VanDam confirmed. “It really works for me.”

The Parts of the KVD Cranking System

Much has been written about the specific rods, reels, line and lures used in VanDam’s successes on the Tennessee River, but each individual piece truly makes a major difference in the success of the VanDam ledge fishing system.

“It’s something I’ve perfected by using all the gear (together),” VanDam said. “The rod needs to be a composite rod. That type of rod allows you to fish the crankbait correctly and allows the bait to deflect properly off cover and allows the fish to take the bait. You need to use fluorocarbon line, the right hooks, lures, and the right reel with enough spool capacity and gear ratio to take in the right amount of line per turn.

“This is all part of the system that I feel works to perfection for me. I’ve caught thousands of bass doing it, and the rods I’ve developed with Lew’s, I think, are the best I’ve ever used to fish the Strike King XDs. You can’t find better, and they’re so affordable. I don’t think I could make my system any better right now.”

Several anglers fished the same stretch of Lake Chickamauga during the qualifying rounds that VanDam fished when he had an epic Championship Round fish-catching flurry that thrust him into a commanding lead. With so many anglers fishing the same spots – and with multiple other pros also slinging crankbaits – what was so different about VanDam’s approach?

“The fishing was tough overall, but if you’re not fishing ledges in June on TVA lakes, you’re fishing for second,” VanDam said. “A lot of the pros know this and fish the ledges, but a lot of them don’t have the experience I do.

“Like any other form of fishing, punching mats, or having drop-shot skills like Aaron Martens, you need to have time on the water and experience understanding the nuances of the bass’ mood, and how to trigger them when they’re heavily pressured. A lot of the anglers weren’t triggering the fish, they were just fishing. I was really cranking and moving the bait and doing everything I could to make them react.”

VanDam’s performance on Chickamauga started with the conditions that he observed in practice.

“The TVA was putting out very little water during the event,” he said. “Only during the last period each day were they generating any water flow. Understanding this and knowing how they’d be positioned thanks to decades of fishing for them put me in the right spots, but the right bait used for triggering them was important as well.”

VanDam also observed something about bass reactions to bait colors that seemed counter to what many anglers espouse: he went with natural colors, even though the general rule of thumb is to brighten up your offerings when the water is dirty, as it was during the Chickamauga event.

“The bass eat a lot of gizzard shad on Chickamauga,” VanDam said. “During practice, I noticed that the natural colors worked best, even in the dirty water conditions. The bass get a lot of fishing pressure there, and a lot of anglers throw brightly-colored baits. I think the fish have become conditioned to the bright baits, but they seemed to have no problem eating gizzard shad in that water color, so why not stick with natural colors? It worked well for me.”

Once he kickstarted a school, VanDam worked hard to maximize his efficiency while the bite was on.

“From your first bite, the clock is ticking on that triggered school,” VanDam said. “You only get a few minutes or a little longer to capitalize on the opportunity. You need to be as efficient as possible, and that’s where using the gear I use really pays off.  With the MLF format of catch, weigh and release, the pheromones released by the bass are not a positive thing for school, so you really need to avoid penalties and be efficient.”

“I’m just experienced fishing at that time of year on that type of lake. Whether it’s TVA lakes, the Ohio or Coosa River, or any current or power generating lake. I use my system and it’s worked for me for a long time.”