Paul Elias: From Kneelin’ and Reelin’ to Smashing Records 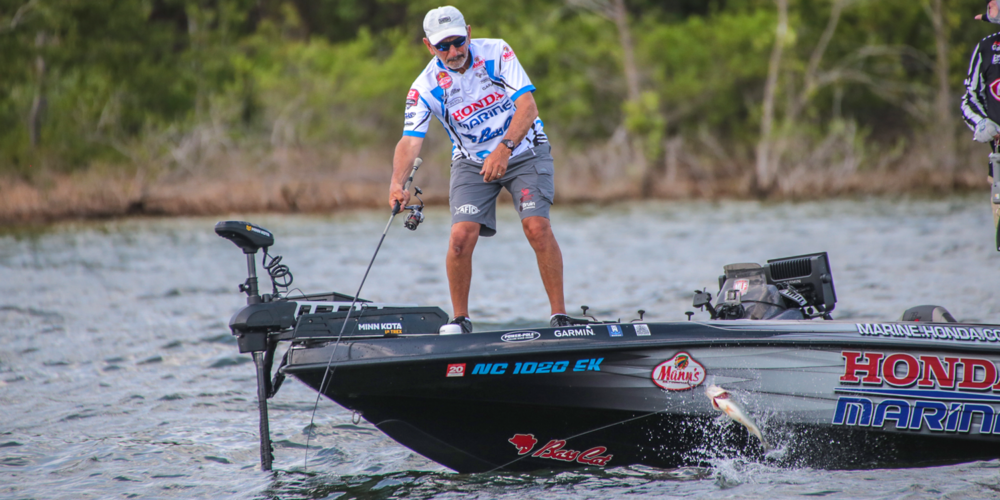 BRANSON, Mo. – What were you doing in January of 1976? It’s possible you weren’t even born yet, as is the case with this author. For Paul Elias, it was the start of a long and storied career as a professional bass angler.

The 1976 Bassmaster Florida Invitational on St. Johns River was the beginning of what would lead to many innovations from the legendary bass angler, who is still slugging it out 43 years later, on the MLF Bass Pro Tour.

Along the way, Elias has won a Bassmaster Classic, set a weight record that still stands, and also introduced the masses to the Alabama Rig after a 2011 FLW Series victory on Lake Guntersville, Alabama. The Mississippi native has been a significant force of change and altered the way we fish to this day.

Getting Off the Bank

As we watched the anglers of the Bass Pro Tour fish Table Rock Lake, several all of them were offshore, and using their electronics to locate bass. That wasn’t always the case, and the field should thank Paul Elias and other pioneers for helping lead the way to fishing structure in deeper water.

“I’ve made my career by fishing off the bank, and it used to be much harder to locate the spots – now the mapping cards are so good, and everything is on your GPS,” he points out.

There was no idling on your big motor and dropping waypoints in those days.

“I looked at an old paper map of Logan Martin recently: I had things written down like ‘line up this tree and the end of this gable and then line up with this power line’ it was so funny to see,” Elias recalls about having to triangulate every offshore location instead of relying on a GPS waypoint to get back to the spot.

“During practice in those days, I would study maps and ride around to search and search, and if I could find two or three spots with a few stumps or a rockpile, I was lucky to find that many places. I would also have them all to myself.”

It wasn’t until he won the 1982 Bassmaster Classic on the Alabama River that folks started to see the power of getting off the bank, and that event itself spurred two other innovations: deeper diving crankbaits and longer rods.

Using a saltwater poppin’ rod simply because it was 7 feet long with a longer handle, Elias fished the deepest crankbaits available at the time to target fish in 12 feet of water during his Classic victory.

The Rebel Maxi R and Bagley DB3 could dive to 10 feet, and Elias discovered that with a longer cast aided by the longer rod, he could get it down a few feet deeper. He simply kneeled down and stuck the tip of his rod into the water to gain the extra 2 feet.

This was the idea behind deeper-diving crankbaits, including Mann’s 20+ that he still fishes today. His win also started a trend for lengthier rods and longer handles.

“Back then, I worked with Lew’s to create a rod for the technique, and it had a longer handle. The only rods that were not pistol grips were flippin’ sticks before that,” he recalled.

When asked what has changed the most in bass fishing the most over his career, Elias quickly had three answers.

“Changes in electronics, Power-Poles and now Spot-Lock on trolling motors have been the biggest innovations that I have seen,” Elias says. “There have been several lures that also changed things: Buzzbaits, suspending jerkbaits, the Alabama Rig, the Senko, Whopper Ploppers, and recently the Ned Rig.

“All of the things brought from the West Coast like swimbaits, drop-shot fishing, and using light line were big changes as well. All of those improvements have come along, and when they first arrived, they were like a miracle bait because the fish had never seen them.”

Today’s bass boats are a feat of modern engineering and technology with a high price tag to match. They were when Elias started as well, but it is nothing compared to the size, speed, and features of today’s anglers.

“My first boat was a 15-foot Venture with an 85-horsepower Johnson. It has two flashers on it and rigged out like that it cost $4,700 brand new,” laughed Elias.

Before the start of the season, Elias had two shoulder operations in the fall of 2018. Even while recovering from surgery, there is no way he would have missed the inaugural Bass Pro Tour season.

“It changed the way I was able to fish,” he said of still recovering from surgery and fishing at the top level of the sport. “The fact that we have no entry fees is the greatest thing that has ever happened to our anglers. The conservation aspect has been the greatest thing for the entire sport.”

Paul Elias has seen many changes over his four decades of fishing as a professional angler. He has made his mark on the sport with many innovations and improvements that are still helping bass anglers catch more fish. He’s still not done either, and his passion for the sport hasn’t faded.