Q&A With Clabion Johns: “I’m Just Trying to do Things My Way” 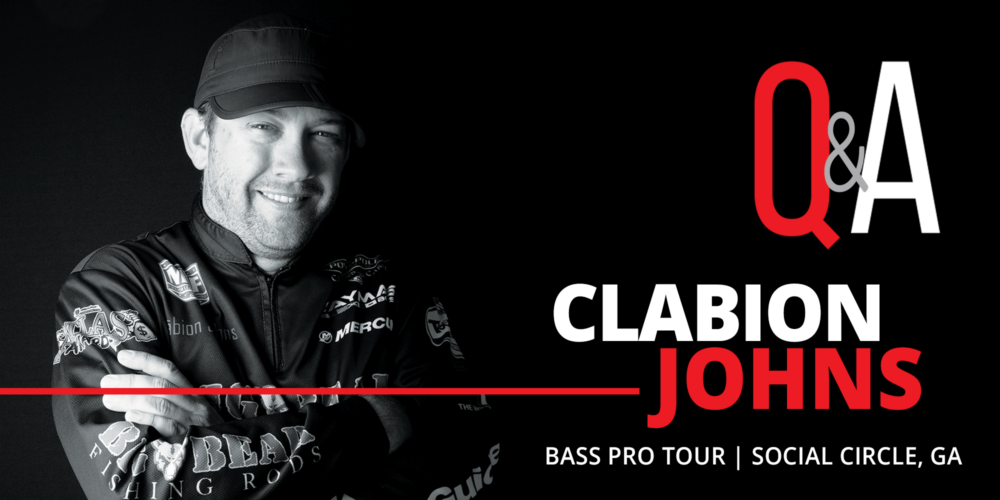 Clabion Johns was a “rookie” on the 2021 Tackle Warehouse Pro Circuit by only the strictest definitions. Sure, it was his first season fishing the national level, but the 39-year-old Georgia native has spent the last several years fishing more bass tournaments than just about anyone. One look at his Toyota Series and Phoenix Bass Fishing League resumes says it all: In 2020 alone, Johns fished 23 MLF tournaments (including the All-American and Toyota Series Championship) and has 14 career Top 10s to his name.

With nothing left to prove on the regional circuits, Johns brought his substantial talent to the Pro Circuit this season and announced his presence with authority, finishing seventh in Angler of the Year points en route to Polaris Rookie of the Year honors. “Consistent” and “steady” might be the best words to describe Johns’ season (if you exclude words like “successful” and “impressive”): five top-35 finishes in seven events, including the Tackle Warehouse TITLE in August, and it all culminated in a rookie season he’ll remember forever.

Your season goal in 2021 was to qualify for the Bass Pro Tour and try to win Angler of the Year. You didn’t win AOY, but you got Polaris Rookie of the Year and a Bass Pro Tour spot. How does that feel?

CJ: Oh, it’s awesome. When I saw the schedule for this year, I knew I could do well. Making the Bass Pro Tour was my main goal, and I can’t wait for the opportunity to fish both that and the Pro Circuit next year. I still don’t think it’s sank in yet, though.

“Clabion” is an interesting name. Is it a family name?

CJ: It’s my middle name, actually, and it’s actually a misspelling of “Clayborn,” but it’s a happy accident. I’m a junior, but I go by Clabion and I like it.

There are anglers in this sport that really love fishing as many tournaments as possible because they think it helps them stay in the groove. Is that the mindset you have for next year in fishing the Bass Pro Tour and Pro Circuit?

CJ: It’ll keep me tuned in with what’s going on in different areas of the country seasonally for sure. For example, if I’m fishing Eufaula or Seminole in the last week of May or first week of June and I’ve been there for a week and haven’t seen a mayfly hatch, it’s coming. I know it’s coming. Keeping in touch with all that’s going on makes you better in terms of tournament fishing.

You’re obviously ate up with fishing. How’d you get the bug?

CJ: I can 100% thank my father, Russell, for that. He kept me on the water when I was really young. We’d walk around ponds on the weekend or scull a jon boat. I grew up fishing every possible way. Then I started fishing jon boat tournaments with my dad when I was 13.

So, was your dad a tournament angler, too?

CJ: No. Good God, no. He was a Tru-Turn hook, Culprit worm and a 3/8-ounce bullet weight guy. Fiberglass rod and a Mitchell 300 reel. That was him. He didn’t own a baitcaster until 2007 and I had to teach him how to use it.

Were you a competitive kid growing up?

CJ: I got really into skateboarding, music, chess, darts, pool and fishing growing up. Those were my passions.

How does it feel to be fishing with your mind 100% focused on fishing?

CJ: I’ve always wanted fishing to be my full-time career and now that it’s going to be, it’ll keep me on my game. My mental state was off a bit (during the 2021 Pro Circuit), but now having my work responsibilities off of me, I feel like there’s a huge weight lifted off me. I now have an extremely strong support system and life is great. I’m in the best mood I’ve been in my whole life.

When I think of Clabion Johns and bass fishing, I think of a frog. Why is that?

CJ: I grew up fishing ponds and grew up with a Pop-R in my hand. I loved throwing a Pop-R. It was the greatest thing ever. When I was 12 years old, I started traveling to Eufaula a lot and it’s full of grass and lily pads and I couldn’t really throw my Pop-R where I wanted. I’d catch fish on it, but they’d pull me into the grass and come off and it got frustrating. I started looking into frogs and started throwing a Strike King Popping Pro Model Frog and caught fish on it and then when the Zoom Horny Toad came out, I started wrecking fish on it. Then, in 2007, the magic happened. Good popping frogs were available, and it was everything I wanted in a bait. But a popping frog changed my fishing to what I always pushed towards and could finally do it on any lake I went to.

For a guy who has as much tournament experience as you do, you fit the mold of anglers who fish their strength and make it work across the country like a John Cox or Andy Morgan. How do you build that confidence to do what you want on any lake across the country?

CJ: I guess I’ve amassed enough data points in this sport to know a bass, is a bass… is a bass. You can isolate certain factors, like structure, or what a bass is eating in a certain lake. If you do your research before you get to a lake you’ve never been to and identify cover or structure you like – which for me is grass – and find areas that look like they should live there, they probably do.

You’re a great shallow fisherman. Do you have a weakness in your game right now, or something you want to get better at?

CJ: Swimbaits. It doesn’t fit how I like to fish. I’ll throw a hard wakebait, but I don’t like swimbaits. To me, I look for bass that are shallow and lazy. My fish eat gizzards, bluegill and crawfish. You’ll never see me hurling an 8-inch swimbait. I’m not Steve Kennedy. It ain’t going to happen. Swimbaits are almost as bad as Senko fishing.

CJ: Finesse to me is a full-sized Trick Worm on a 1/4-ounce shaky head. That’s as finesse as I get.

People know when you launch you boat in the morning because you tend to have music blaring, and I know I’ve heard your truck rocking out in the parking lot. What type of music do you like to listen to?

CJ: I’m a metalcore guy. I was a guitarist in a metalcore band for a long time. I enjoy having a bit of persona. You can look at me, look at my boat and know I’m not a normal fisherman. I don’t fit in a normal niche. I’m just trying to do things my way.