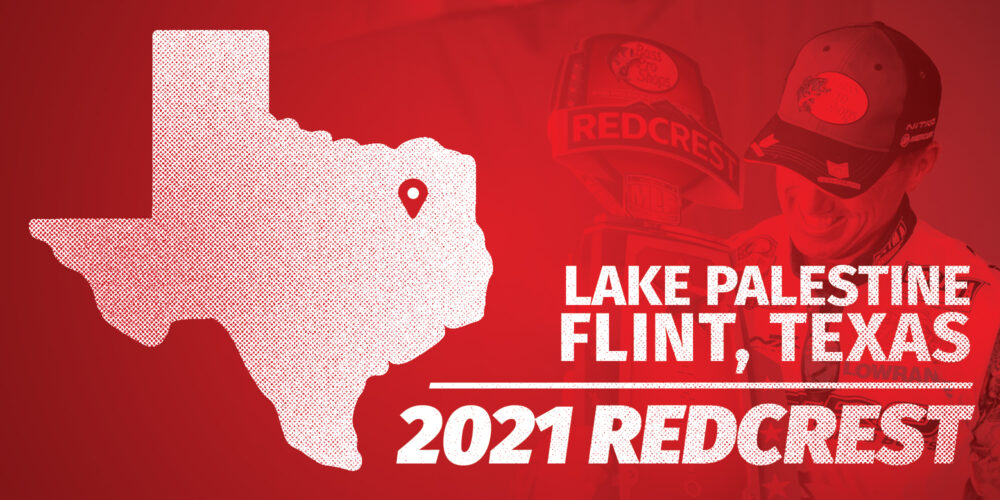 FLINT, Texas – The list of East Texas lakes that have hosted major tour-level bass championships is surprisingly small, given that the “everything’s bigger in Texas” label certainly applies to the state’s largemouth bass.

But Major League Fishing is about to introduce the world to a new championship bass fishery in the Lone Star State: Lake Palestine.

MLF announced Tuesday that 25,560-acre Lake Palestine in Flint, Texas, would serve as the host of REDCREST 2021 on February 21-25. The site change from Grand Lake, Oklahoma brings one of East Texas’ best “sleeper” lakes into the spotlight as the 40 qualifying anglers from the 2020 Bass Pro Tour descend on this impoundment of the Neches River to compete for a $300,000 top prize.

“Palestine is the ultimate sleeper lake,” confirmed MLF pro Kelly Jordon, who lives on Lake Palestine. “It’s always been overshadowed by Lake Fork, Sam Rayburn, Lake of the Pines and Cedar Creek, but it’s an outstanding bass lake. It doesn’t have a big park with easy access, so I just don’t think people outside the area now much about it. But come January and February, unless the wind is blowing 100 mph, you better catch upwards of 30 pounds if you want to win a five-fish tournament here.”

A scan of local and regional tournament results bears Jordon out: winning weights in Media Bass two-man team events held in February on Palestine the past four years range from 25 to just shy of 29 pounds, with big-fish weights from 8½ to 10¾ pounds.

Digging further back into Palestine’s tournament history reveals five-fish bags of 30-plus pounds in February. The lake record – a 13.22-pound juggernaut caught on a Zoom Speed Craw by Casey Laughlin  – came during a Media Bass tournament in early February of 2014.

“Pretty much any tournament from 1990 until now, if you fish Lake Palestine in January or February and the wind isn’t blowing 100 mph, you better have close to 30 pounds,” Jordon says. “The last team tournament I fished here in the late 1990s, my team had 27 pounds and we came in fourth. It went 32 (pounds), 32, 29, and we were fourth with 27. It just has that East Texas ‘thing’: Palestine grows bass like crazy, and it’s full of fish.”

Lake Palestine was created in 1962 with the construction of Blackburn Crossing Dam on the Neches River. The lake covers 25,560 acres at full pool, stretching 18 miles from the mouth of the Neches east of the town of Chandler, to the Neches’ outflow north of Highway 175 near the town of Cuney.

The lake is riddled with stereotypical East Texas standing timber on the upper end – “It’s treacherous and there are no marked boat lanes, these guys will have to do their homework,” Jordon says – but it has the gamut of cover.

“You’d have to say that historically, the best largemouth cover is on the northern half of the lake, above the Highway 155 bridge – the dynamic thing about Palestine, though, is that every now and then, somebody will win on the main lake on boat docks, or in the smaller creeks that don’t get a lot of pressure,” Jordon says. “These guys will be flipping docks, stumps, all kinds of shallow cover. There’s plenty of shallow grass. The whole lake fishes. It’s like Lake Conroe, but there are more (fish), and it produces a lot of 7- and 8-pound fish. In (the MLF) format, the sky’s the limit. I think these guys are going to smash ‘em.”