Reese Rolls on to Championship, Lots of Top 20 High-Jumpers on SCORETRACKER® 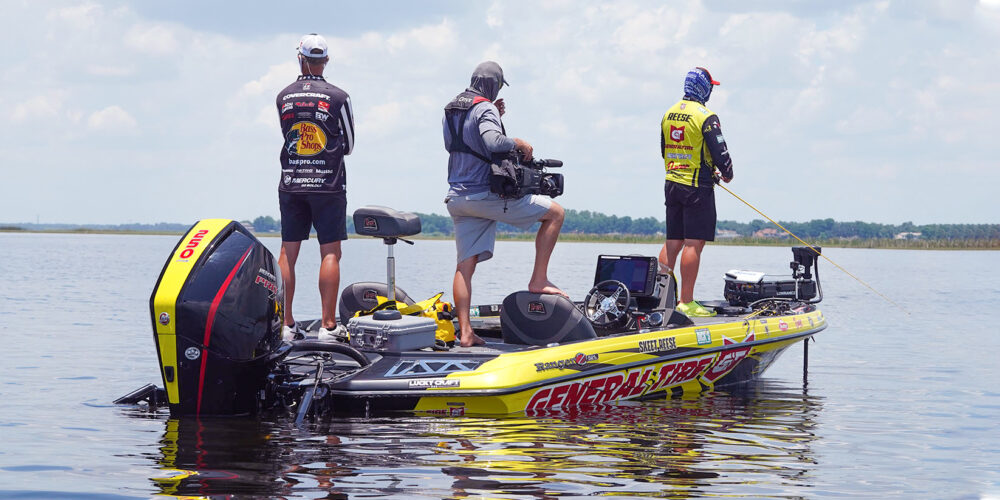 KISSIMMEE, Fla. – It was another simmering-hot day at the Toyota Heavy Hitters Presented by Venmo on the Kissimmee Chain of Lakes, with a heat index over 105 degrees. Just like Tuesday, one angler ran away to win the round and several anglers made valiant efforts to push themselves into the Top 20.

Some anglers made huge moves on SCORETRACKER®, including Mark Davis and Russ Lane, who dipped below the Top 20 and then climbed into the Top 10 at 4th and 6th place, respectively.

Both Bradley Roy (22nd to 11th) and Britt Myers (23rd to 16th) also made moves into the Top 20 thanks to great performances.

Skeet Reese continued his push and will move straight to the Championship Round.

Skeet Skips to Championship Round

Reese’s march toward the Championship Round was never really in doubt as he got off to a strong start today to distance himself from the field. He wrapped up the Group B qualifying rounds with 23 pounds, 9 ounces, bringing his total for two days to 67-1.

“I couldn’t be happier,” Reese said. “It was awesome to catch some early and create a little gap to take off some of the pressure. It allowed me to look around for some other areas later in the day.”

Reese feels like things are starting to turn around after a tough start to his Bass Pro Tour career.

“It feels good to have some momentum after not catching them very well to start the Bass Pro Tour,” Reese said. “I had a good run at the end of the Lake Fork event and feel like I’m starting to make good decisions and fishing to win.”

Reese will join Zack Birge and the top eight anglers from tomorrow’s Knockout Round in the Championship Round on Friday.

When time expired and it was official, Rose was ecstatic.

“It feels really good,” he said. “What a blessing. Thank you, Lord, for that big 9-pounder.”

“The fish were getting pressured and it was a hot summer day, so I was just trying to get some bites with a finesse approach and that big one bit,” Rose recapped.

Rose also finished in second place in his group with 50-12.

There have been some impressive weights posted, but the 20-pound mark has been more rare for many in the field. Four anglers who climbed into the Knockout Round from outside of the Top 20 hit 20 pounds or more on Wednesday.

Myers also moved upwards 20 places thanks to a haul of 22-7. Roy moved into safety after catching 23-3.

Lane pulled 27-12, with much of it coming in the final 30 minutes on two solid bass.

“What a way to close a day out. That was fun,” said Lane. “I needed a good day like that.”

Thursday’s Knockout Round features 19 anglers from both Groups A and B. They’ll see a forecasted high of 89 degrees with scattered thunderstorms and winds to 12 miles per hour.

Watch all three periods of competition during MLF NOW! live stream June 7-12 beginning at 6:45 a.m EST. Watch for free on MajorLeagueFishing.com, the MLF app or MyOutdoorTV. The General Tire Takeout show begins at approximately 3:00 p.m. EST after each day of competition.