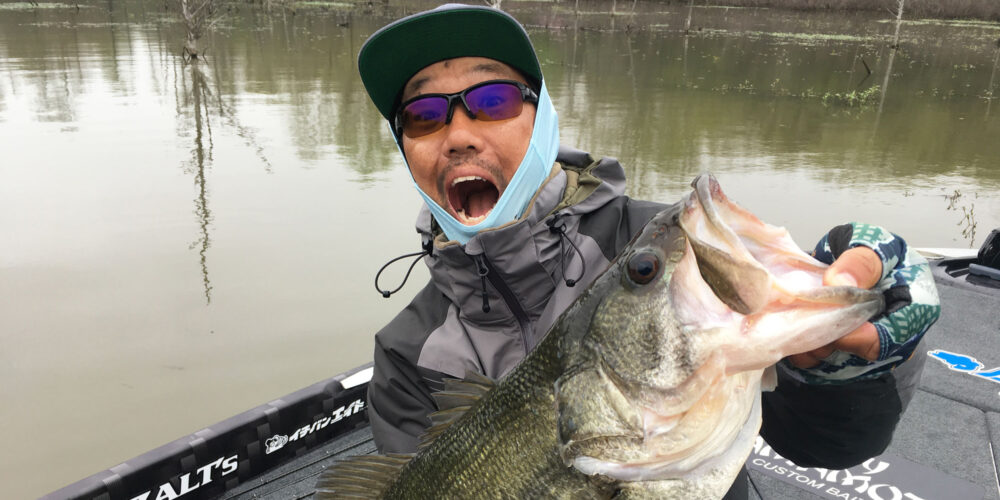 You’d be hard-pressed to find an angler on the MLF tour with deeper roots in finesse fishing than Shinichi “Shin” Fukae. Shin came to the FLW tour from Japan in 2004 with years of experience with light-line techniques under his belt. Some of those techniques wouldn’t be part of American angler parlance until years later.

Fukae has pretty much run the gamut of finesse techniques in the course of his career, and he’ll draw from any of them as the situation demands. But today he has three clear favorites when his quarry is prespawn bass.

Don’t let the Ned rig’s reputation as an “American finesse technique,” fool you. It’s Fukae’s No. 1 finesse option during the prespawn period – once he’s given the rig his own Shin spin, that is.

“Most fishermen use an open hook mushroom jig for their Ned rig, but I don’t like that because it gets hung up a lot,” says Fukae. “It wastes time.”

His choice is a 1/8-ounce Gamakatsu G-Finesse Tricky Head jig with a 3-inch Senko, rigged “Texas” style for weedless, snagless presentation. He designed the jig for a shaky head worm but finds it every bit as effective fishing the Ned.

“I’m always shaking a Ned worm, lifting it and allowing it to drop,” he says. “On the fall, it will kind of spiral like a tube bait.”

Target areas include boat docks, laydowns, brushpiles and grass pockets along with any promising flat, contact point or staging area.

“I cast it, let it hit bottom and them just lift and let it fall again,” he says. “All the bass – largemouth, smallmouth, spotted bass —  hit it, but especially smallmouth!”

“Bait Finessing” with the Neko Rig

The Neko rig’s popularity has blossomed in recent years, but Shin’s familiarity with this nail-nose wacky-style worm rig goes back 20 years to his bass fishing roots.

“Basically, I fish the Neko rig on the bottom, but I can let it swim and fall, too,” says Fukae. “You can fish it for suspended bass or fish on the bottom or bass hanging around timber and docks.”

The prospect of catching fat bass in the mid-range of the water column under boat docks is most apt to put his Neko rig in play.

“Prespawn bass often suspend around boat docks, especially those big females,” says Shin. “The male may be already behind the dock (preparing a bed) while the female is suspending under the dock.”

Shin often puts an interesting twist on his Neko rig assembly, shifting from standard spinning gear to a baitcasting outfit.

“In Japan, we use casting tackle when we fish the Neko rig around cover and docks so that we can fish heavier line,” he explains. “We call it ‘Bait Finesse’ fishing. I use a 1/16- or 3/64-ounce nose weight and a little longer bait like a 5-inch or 6-inch Yamamoto Senko or a 6.5-inch Yamamoto Kut Tail Worm.”

The Kut Tail is his favorite plastic when ‘Bait Finesse’ fishing for prespawn females.

He likes the rig’s versatility, too.

“I can fish it slow or fast,” he says. “It is a nose-down bait, but when I shake it, it goes sideways and moves even more water, so I can fish it in the middle of the water column or on the bottom.”

In many situations, his Neko rig replaces the better know unweighted wacky worm. The latter requires a slower, more patient presentation and is harder to control in the wind.

One of the hottest trends in the early going of the 2020 bass season was the use of “leaderless drop-shot” rigs like the Jika rig and Tokyo rig. Fukae fashions his own combination, generally employing a 1/4-ounce Fish Arrow Free Rig Tungsten Weight with split rings, swivel and choice of hook.

“The biggest key is the swivel,” says Fukae, who links swivel, hook and dropper weight to a sturdy split ring, tying line to the open eye of the swivel.

The leaderless drop-shot rig’s biggest advantage is its vertical fall. Pitch it tight to cover, and it drops straight down, unlike a Texas-rigged bait, which is quick to wander laterally due to the bullet weight’s shape and positioning.

“I want a reaction bite when I’m fishing this rig,” says Fukae, who uses a wide variety of plastic baits from worms to craws to creatures and more, using a variety of hook styles, too, including straight shank, offset hooks and even wacky rig finesse hooks.

The straight vertical drop of the rig makes it ideal for fishing small holes and tight pockets when bass are hunkered down and reluctant to move, particularly after a cold front or other adverse weather or water condition.

“I can throw the leaderless drop-shot into itty-bitty places, between trees, next to laydowns and logs, cattails and reeds,” he says. “Grass holes in hydrilla or eelgrass beds are best.”

If you haven’t tried some version of the leaderless drop-shot, you may be missing the boat.

“I can’t believe how many people were fishing it this year in Florida,” he says. “Guys are using it a lot!”