Fluctuating water flows have turned bite on (and off) 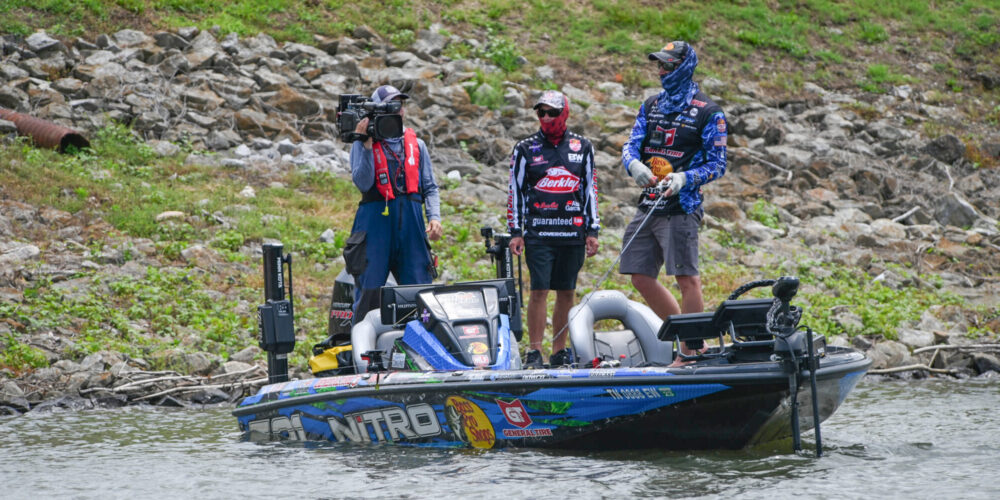 It’s summertime on the Tennessee River and terms like “inflow,” “outflow,” “discharge,” and “CFS” (cubic feet per second) are just as relevant as rods, reels, and lures. Current equals life this time of year on fisheries like Watts Bar Lake, and significant changes in water flow signal bass that it’s time to feed.

All week long during General Tire Stage Five Presented by Covercraft, anglers like Dustin Connell, Justin Lucas and Ryan Salzman have found success fishing Watts Bar Dam when water managers increase flow through the dam. Tennessee’s Ott DeFoe, who is well known for running up creeks in his aluminum river boat and generally seeks out current everywhere he goes, breaks down his approach to moving water.

The power generation and current levels on the TVA (Tennessee Valley Authority) lakes are based on water inflows, rain, and power usage. DeFoe checks the current information via the TVA app to plan his day when fishing these lakes.

“The TVA app is accurate and easy to use,” DeFoe said. “It’s very important to keep up with the schedule and know when the water will be moving because the fish get conditioned to feeding during those times. When the water isn’t moving, the bite can be nonexistent.”

Water movement through the dams is regulated by the TVA, and DeFoe will religiously check the flow for the lake he is fishing, both coming in and flowing out of the lake.

“You want to see the schedule and all of the water coming into it – not just the discharge – because different parts of the lake can be affected by current,” he said. “Natural headwaters always have some current coming in and they’ll hold the water until they have demand, but will also release water to keep the lakes stable.”

If the current isn’t running until later in the day, DeFoe will plan the rest of his day around that. Current was nearly dead flat early in the day the first three days of Stage Five, starting out at 5,000 cfs before ramping up to 20,000-plus cfs in the afternoon.

“You sometimes have to fish areas that aren’t your best (when current isn’t moving), maybe back in creeks or bays where the fish aren’t as current oriented,” he said. “You have to wait for some areas to get right and the fish to set up. Whether it’s below or above dams, fish in these lakes feed when the water is moving.”

On riverine lakes, the current affects the entire body of water, but right below the dam, it’s all about moving water. On the Tennessee River lakes, anglers can have fast and furious action for bass and other predator fish when the water is running. That’s been proven by anglers like Connell and Salzman, who have taken advantage of afternoon flurries when the current ramps up.

“It’s a big deal on the TVA lakes, but it’s not just here,” DeFoe said. “The Coosa River lakes in Alabama is another prime example, but I’ve done it on the Upper Mississippi in Wisconsin and Lake Oahe in South Dakota, and those two fisheries are a long ways from Tennessee. Fishing below a dam works great on any system with a hydroelectric dam that generates current.”

Like all moving water, finding current breaks is crucial for finding bass and DeFoe likes to do some deeper research before fishing moving water.

“Anything that the current bumps off of are the places you want to key in on,” he said. “When the water is flowing fast, it can be hard to see visible eddies because they might be deeper. When it’s moving, the water is too turbulent to graph. I like to go when the water is off and idle and scan around for rocks and other breaks and sometimes you can see them visually with your eyes. That will give you a better idea of where to fish when they’re generating water.”

Safety and boat positioning come into play when fishing just below a dam. Life jackets are often required when fishing near dams because currents can change quickly. Keeping your boat in the right place is also critical for safety but also for fishing efficiently.

“I always have the boat positioned directly into the current and never throw downstream,” DeFoe said. “It allows you to control the bait better and most of the time, I’m using quartering casts. I do that instead of casting dead center into the current because it makes you reel too fast to keep in contact with your bait.”

Fishing below a dam requires heavier weights to keep the bait down and DeFoe upsizes the weights on his jigs, swimbait heads, and tungsten weights for soft plastics. He also likes to fish something that some anglers overlook: crankbaits.

“Crankbaits in current work very well, but it can be a lot of work,” he said. “Fishing by dams is popular for bank fishing and there’s usually a lot of line in the water from people breaking off. It can be frustrating tangling up with line so much, but it works great.”