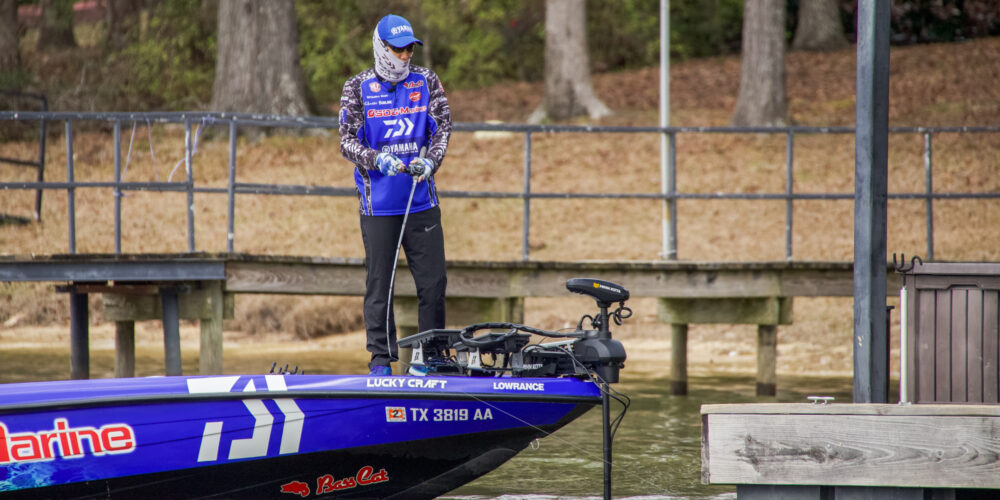 From the minute lines went in the water at the very first Major League Fishing competition at Lake Amistad in 2011, Texas-based pro Takahiro Omori has proven to be one of the most successful anglers in the MLF format. His fast-paced, power-fishing style seems to be a perfect fit for the every-catch-counts format as he scoots down the bank, often while casting a shallow crankbait.

Omori’s proficiency with a squarebill has helped him score two MLF Cup wins (plus five Bass Pro Tour Top 10s), but he’s been winning money on crankbaits for most of his professional career. He won an Elite Series event with a squarebill, and his famous “I knew it” moment from the 2004 Bassmaster Classic was thanks to a shallow-running crankbait.

Throwing a crankbait is part of who Omori is as a tournament angler, and while his approach seems simple, he’s refined the technique to a level that allows him to catch fish while cranking all year long.

“This is my style of fishing and what I like to do,” Omori says. “I can almost always find somewhere to fish a shallow crankbait. I’ll start doing it in the prespawn and will do it into December on some lakes.”

Omori will utilize shallow crankbaits early in the year and adjust where he fishes them throughout the year.

“I start early in the spring when the water temperature is still cold, even as cold as 45 degrees,” Omori says. “It works great to trigger a reaction bite, even when fish are not that active yet. Early (in the year), you might not get as many bites, but they’ll usually be big fish.”

As the waters warm in the summer months, Omori sticks to the same approach of fishing shallow and moving fast.

“In places like New York, Michigan, and Minnesota, the fish will stay shallow all summer,” Omori says. “On southern lakes, the majority of fish will get out deep because it gets so hot. That’s when I run into the rivers and search for current, and catch a lot of fish doing that.”

With a squarebill in hand, Omori is generally looking hard cover – what he’s searching for will change with the seasons.

“I look for any hard object from riprap and rocks to wood or stumps,” Omori confirms. “In the spring, when they’re eating crawfish, it’s usually rock. When they’re eating shad, it seems like laydowns, bushes and stumps are better.”

As Omori trolls down the bank, he prefers cast to targets at a 45-degree angle while retrieving his bait as his boat is pushing forward.

“Doing this is how I can cover more water,” he says. “I reel fast and try to hit the bait into an object or the bottom. Once it hits, I stop it for a second so the bait will float up and not hang up. This is also where you get a lot of bites – it will just feel heavy, and they will be hooked.”

Omori’s shallow-cranking expertise led to the development of a Daiwa Signature Series Tatula Elite Series – everything about the rod was built to his specifications.

“It’s a 7-foot medium-heavy composite rod,” he says. “It has a soft tip but a good backbone for fighting fish. The length makes it easy to make short roll casts and underhand casts to targets. It’s also a faster taper to the rod, which helps with making accurate casts.”

Making as many casts as possible as he moves down the bank is one or Omori’s key goals, so he uses a blazing-fast reel to assist him.

“I use a 9.0:1 Daiwa Zillion reel with 16-pound Sunline Shooter fluorocarbon,” he says. “I want to cover water fast and also reel the bait fast. The faster reel also gives me more control when fighting fish because I can always keep tension on the fish.”

Omori’s crankbaits of choice are mainly the Lucky Craft LC series of squarebills.

“They cut through water good and have a nice wobble; they’re the original plastic squarebill,” Omori says. “On the Bass Pro Tour, I like the 1.5 size because it’s perfect for anything over 2 pounds. I use the 2.0 and 2.5 on lakes with bigger fish and in really muddy water.”

Omori is a fan of chartreuse hues in dirtier water and will mix in shad and crawfish colors depending on the season and water clarity.

He’s also a stickler for sharp hooks and will swap out the stock hooks and change them throughout a day on the water.

“I like the Gamakatsu round-bend trebles,” Omori says. “They’re sharp, but I always check them during the day. I’ll change my hooks two or three times a day if I’m fishing around rocks.”

While Omori keeps it relatively simple and fishes shallow crankbaits wherever and whenever he can, he has it down to a science.

“This (technique) has been working for over 30 years,” Omori says. “History has proven it and you can’t go against history. Once you learn to fish a shallow crankbait, you’ll catch more fish.”