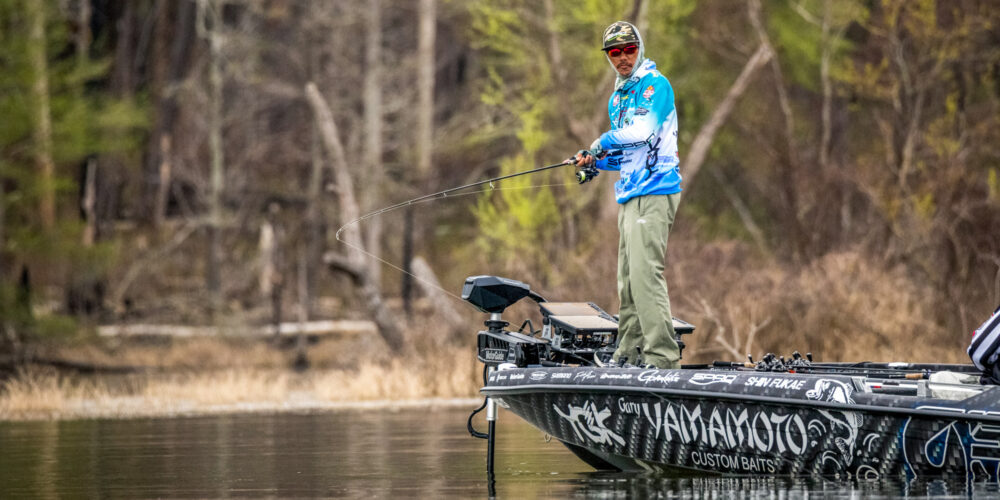 JASPER, Texas – If you take a close look at SCORETRACKER® after the finale of Wednesday’s Qualifying Group B competition at Toro Stage One presented by Power-Pole, two things are strongly evident: The fish are starting to wake up on Sam Rayburn, and there are many different ways to catch bass right now on this Texas reservoir.

After catching 10 pounds to start the tournament, Fukae rebounded with a day best 33-13 on 11 bass. He made a serious run for the top spot but fell a little short of winning and advancing to the Championship Round, finishing third.

“It was a great day and I’m happy to finish up in third,” Fukae said. “I was looking to get first place and win the round but didn’t make it. I will go to the same areas again and my goal is to catch 10 more bass.”

Fukae is rotating through four or five areas with hydrilla in 3 to 6 feet of water and using two different baits.

“This morning, they were schooling, and I was throwing a weightless Yamamoto D-Shad in 3 feet of water,” he said. “Later in the day, I was fishing a small swimbait on a Gamakatsu Spring Lock Spinner Swimbait Hook.”

Lucas caught just two bass for 4-15 on his first day of fishing, and it looked like he would be headed to an early exit after the first period on Wednesday. He had just one scorable bass in the first period before erupting for a 31-13 day. Included in that bag was the Berkley Big Bass of the Day, a 7-14 that boosted him to seventh in his group.

At 12:26 pm, Lucas finally got the clue he has been looking for all week long and ran with it.

“That 7-14 told me what I needed to be doing,” Lucas said. “All week long, I just needed a clue, and I finally got one. I’m way more excited about the rest of the week than I was before that.”

After that big catch, he added seven more fish before switching to practice mode.

“I have been trying to force the spawning stuff and it wasn’t working,” Lucas said. “I caught that one on a moving bait in 4 feet of water in a perfect prespawn area.”

Late in the day, Tharp made it interesting between himself and Gerald Spohrer as he narrowly missed winning the round. He boated 10 bass for 31-12 and finished with 47-15 for two days to end up second in the group.

“Days like today are why you go bass fishing,” Tharp said. “It came down to the last second, the last cast, and I had a chance.”

Tharp’s run toward the top of SCORETRACKER® came with a one-two punch of pitching bushes and throwing a frog.

“I’m hitting bushes, trees, and whatever is in front of me with a Zoom Z-Hog,” said Tharp. “My average bite was way better with the frog, and I’ll keep both of those rods in my hands tomorrow.”

Spohrer, who held second place after the first day with 26-2, added 23-14 on eight bass to win his round and advance straight to the Championship Round.

“I’m overwhelmed with joy,” Spohrer said as time expired on MLF NOW! “This is the first round I’ve won with MLF and it was cool to duke it out at the end with my buddy Randall.”

Spohrer stuck with a white swim jig around cypress trees on the first two days of the competition.

“All of the credit goes to this swim jig: every single fish I caught was on this bait,” he said. “I’ve been a ‘one-trick pony,’ but it has worked for me so far. There will only be 10 of us left, so I’ve got a good shot and will be starting the year with a Top-10 finish.”

After catching just 6-9 on the first day, Vinson jumped from 30th to 14th with 22-13 on Wednesday. Much of that action was in the closing moments with a jerkbait.

“I caught some in the morning with a vibrating jig and a NetBait Baby Mad Paca, but that bite died out,” he said. “I made a move to a jerkbait spot and they were eating.”

Vinson described the area as “hydrilla edges in 4 to 8 feet” of water with visible bass and baitfish activity.

“I’m watching them on my Garmin Panoptix LiveScope and seeing both the bait and the bass,” he said. “Sometimes, I’m even watching the bass eat the baitfish on my screen.”

His jerkbait of choice is a white, shad-patterned version and he has two of them rigged up.

“I have one on 12-pound Seaguar Tatsu fluorocarbon and one on 15-pound test,” he said. “I’ll use the lighter line when I see the fish are sitting a little closer to the bottom and want it to get down deeper.”