The Carolina rig is still in style, according to Bass Fishing Hall of Famer Mark Davis 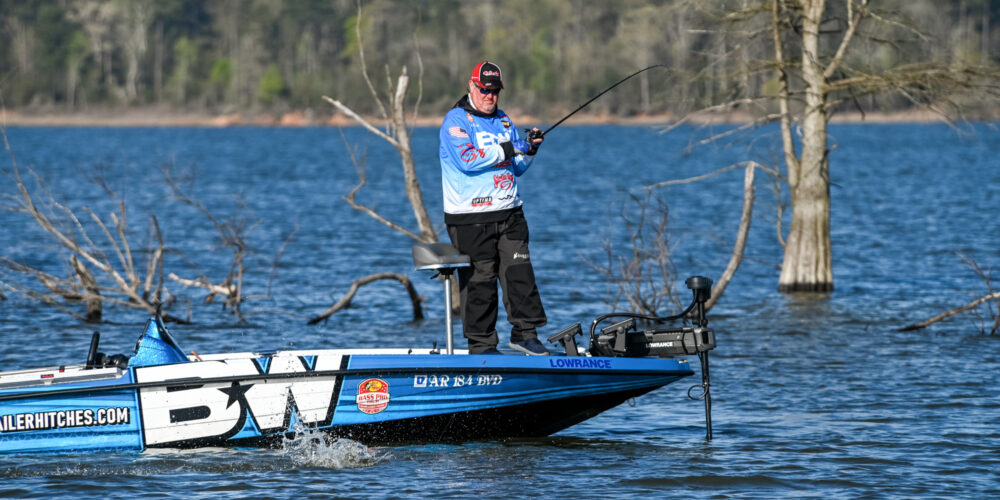 The world is full of trends and fads, many of which come back into vogue decades later (hello, all of you currently rocking a mullet). The venerable Carolina rig could be compared to the “business in the front, party in the back” hairstyle of the 1980s, as both were popular more than 30 years ago and now seem to be popping up everywhere.

For some – like Bass Fishing Hall of Famer Mark Davis – the Carolina rig never went out of style, and he has the tournament results to prove it. Davis finished sixth at the 2021 Bass Pro Tour season opener at Sam Rayburn, fishing primarily a Carolina rig with a Strike King Game Hawg in candy craw behind a 3/4-ounce weight and a 3-foot leader

“It seems like (the Carolina rig) went out of style and many in the younger generation don’t seem to want to fish one,” said the Mercury Pro Team angler. “It’s been coming back the last few years, though, especially on northern smallmouth fisheries. But it works everywhere. I never stopped using it.”

Davis’ fondness for the “ball and chain” is due to its effectiveness throughout the year, and its ability to catch all bass species. Davis’ outlook and how he fishes the rig hasn’t changed in decades and you’ll almost always find at least one rigged up and ready in his boat. But, Davis’ gear has evolved dramatically over the years, making the Carolina rig even more effective than it was in the ’80s.

Where the Carolina rig shines

Davis was a fishing guide in the 1980s while starting his highly successful professional career, and he readily admits that the Carolina rig helped greatly in both scenarios.

“It was great as a guide because it’s very easy to train someone to fish it,” he says of the rig’s simplicity. “Even someone without much experience can cast it easily and feel the bottom. You have to be able to detect the bites, but it’s a very forgiving technique because it’s hard to fish wrong.”

Davis admits that fishing a Carolina rig effectively is slow, but that’s part of the technique’s strength.

“I’ve always called it ‘bubba finesse’ because it truly is a finesse technique where you’re fishing slow and the plastic is weightless,” he said. “But, you’re using big rods and heavy line, so you don’t have to finesse them when you hook one.”

Davis picks roughly nine months of the year as best producers for a Carolina rig.

“It works in Florida year-round, but early spring to late fall is the prime time in most areas,” he said. “I’ll fish one anytime the water is above 40 degrees. It’s effective because you can cover water, but still fish slowly.”

One thing that makes a Carolina rig unique is that any soft plastic lure will work, but Davis has some favorites.

“I’ve used little finesse worms and big 12-inch worms and caught fish,” he said. “Any bait will work at times and it depends on the species I’m targeting. For smallmouth, a Strike King Rage Scounbug 3.5 is a perfect compact crawfish imitator.”

No matter the bait, Davis prefers a light-wire hook.

“You want something that’s not going to weigh the lure down,” he said. “The bait is floating behind the weight and has more of a gliding action – a heavier hook will eliminate a lot of that action.”

Davis likes a longer rod to cast long distances and a reel capable of handling heavy lines. His reels generally have larger line capacities and wider spools that aid in casting with thicker lines.

“I use several different rods from Lew’s and they’re all between 7 foot, 6 inches and 8 feet long,” Davis said. “You want a rod that’s not too stiff and has some give. The long rod is important to get a long cast, especially when using a long leader, and it also allows you to make those winding hooksets and pull up slack so you can get a good hook in the fish.”

Regarding leader length, Davis will measure out anything from 18 inches to 7 feet.

“My general rule of thumb on leader length is the cleaner the water, the longer the leader,” he said. “I’ll use a 7-foot leader in real clear water because the weight is the attraction as it stirs up the bottom, and I want my bait back a little ways behind it. In stained water, it’s the opposite and the shorter leader is needed for the fish to find the bait.”

The standard weight used by many for Carolina rigs is the tried-and-true lead egg sinker. Davis admits to having old coffee cans full of them at home, but has switched to tungsten.

“Ninety percent of the time, I’m going to be using a 3/4-ounce Strike King Tour Grade Tungsten Carolina Rig Weight,” he said. “I’ll go to a 1-ounce weight in deeper water and sometimes use a 1/2-ounce, but 3/4-ounce is the easiest to fish correctly. You’ll be amazed at the differences between the weight sizes and what you can feel, and tungsten has made it that much easier to feel the bottom.

“Using a lighter weight forces you to slow down to feel the bottom, which can be good. I’ve always said that you can fish a Carolina rig too fast, but you can never fish it too slow. You want to be able to feel everything when the weight is on the bottom to detect light bites and changes along the bottom.”