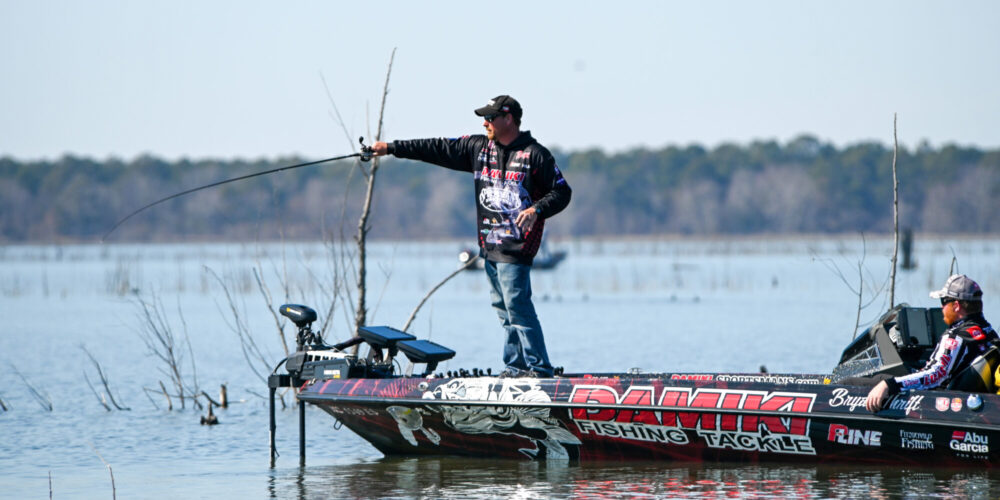 Bryan Thrift was within arm's length of a giant that got away on Bussey Brake Lake. Photo by Garrick Dixon. Angler: Bryan Thrift.
February 17, 2022 • Tyler Brinks • Bass Pro Tour

The story of “the one that got away” is as old as fishing itself. North Carolina pro Bryan Thrift has a good one to share, and unlike other “could’ve been” big-fish stories, this one was witnessed by thousands of people.

Midway through the Championship Round of the B&W Trailer Hitches Stage One Presented by Power-Pole, Thrift battled a large Bussey Brake largemouth to the side of his boat, only to have the fish slip away at the last moment.

We’ll never know the exact weight of the fish, but it was clealry a big one. Thrift already had a 9-pound, 3-ounce fish on SCORETRACKER®, and the lost fish appeared to be in the same weight class. Thrift ended the day in fourth place, but the lost fish would have been more than enough to take the win as he fell just 2-3 short of Bradley Roy’s winning total.

Thrift got off to a strong start on the final day with his 9-3, and had connected with four fish for 23-15 before 1 o’clock. He was fishing within sight of Roy and stuck it out in his primary area all day long, flipping and pitching a tube to the ample wood cover in the area.

“(That area) was a cool place that looked like an old flooded pond because it had lily pad stalks, big stumps, and old timber where the rest of the lake seemed to be smaller wood that they flooded more recently,” Thrift said.

Many anglers like to get up close to cover when flipping and pitching, but Thrift stayed way back and pitched a much longer distance to each target.

“I always try to stay back, that’s how I like to fish,” he said. “The bigger the element of surprise the better, especially for big bass that are much more aware of what’s going on.”

The Fish That Could’ve Been

While Thrift admitted he wasn’t very happy when the big one came free, he quickly shook it off. He’s unsure of just how big it was, but it would have been large enough for him to secure his first Bass Pro Tour win.

“You can’t let it affect your next bite, so I was upset but got over it right away,” he said. “I don’t think it was quite as big as the one I landed, but it was a giant. I’d say it was anywhere between 7 and 9 pounds, but it could have been a 10 – everyone else who’s seen the video seems to think it was (10).”

Thrift said he’s seen the video of his lost fish on social media, and still doesn’t know what went wrong.

“Maybe I shouldn’t have grabbed the line, but I’ve done that a bunch of times over the years with big fish,” he said. “In my opinion, if you’re going to lose one, you’ll lose it no matter what because it usually comes down to how it’s hooked. It just wasn’t meant to be this time.”