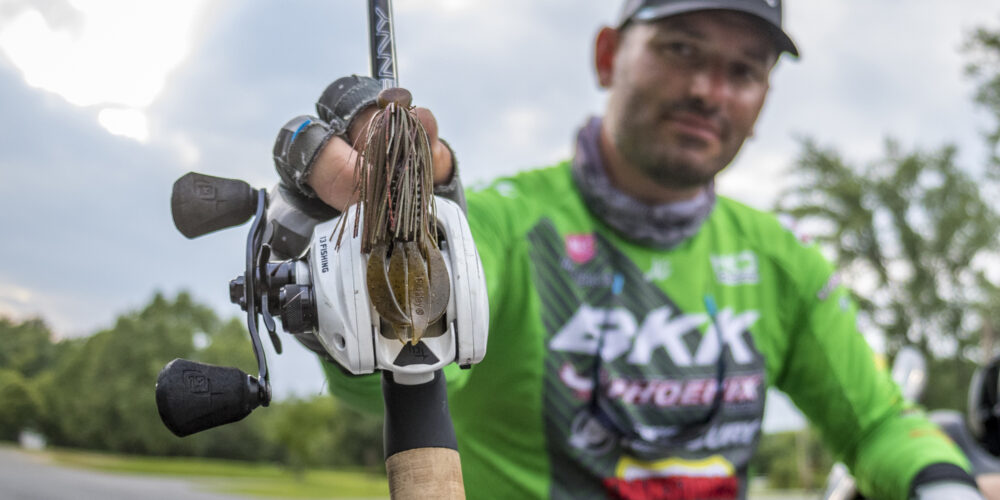 Entering Toyota Stage Six Presented by Googan Baits, one of the key questions was “Smallmouth or largemouth on Lake Champlain?” It turns out that the answer was “both” as 1,002 scorable smallmouth and 925 largemouth made it onto SCORETRACKER®.

In the end, though, smallmouth were the difference-maker for Jacob Wheeler. The Team Toyota pro landed 27 smallies to the tune of 88 pounds, 2 ounces to dominate his second Bass Pro Tour event in a row (he also won Stage Five on the St. Lawrence River). That said, it was a diverse week on Champlain, with multiple baits producing both brown and green bass for the BPT field.

Here’s how the Top 10 caught ‘em on Lake Champlain:

Wheeler worked his way through the Qualifying and Knockout Rounds with a mix of baits (a 13 Fishing Loco Special was key early in the week), but when it came down to “money-making time” it was all about classic smallmouth plastics.

Wheeler’s most effective setup was a Googan Baits Rattlin’ Ned in Smelt and Green Pumpkin Goby fished on a No. 2 VMC Finesse Neko Hook and a 3/8- to ¾-ounce VMC Tungsten Teardrop Drop-Shot Weight. He fished that on a 7-2 Duckett Fishing Jacob Wheeler Signature Series spinning rod and a Duckett Fishing 2500-size Paradigm reel spooled with 8-pound Sufix NanoBraid and 8- to 10-pound Sufix Advance Fluorocarbon.

Gallelli committed to Ticonderoga from the get-go, spending all four of his competition days targeting largemouth with a jig and frog.

Gallelli caught the majority of his fish on a 1/2-ounce green pumpkin jig with a 3-inch green pumpkin Berkley PowerBait Pit Boss. He fished that on a 7-3 heavy 13 Fishing Envy rod and 13 Fishing Concept C2 reel spooled with 17-pound Sufix Advance Fluorocarbon. He also connected with several scorable fish on a black Booyah Pad Crasher that he threw on a 7-4 heavy 13 Fishing Omen rod and 13 Fishing Concept C2 reel with 50-pound Sufix 832 Advanced Superline.

DeFoe started the tournament fishing the main lake, but scrapped that plan after a lackluster first day and committed to cranking Ticonderoga for largemouth.

Horton also started the week off targeting smallmouth but abandoned the main lake for Ticonderoga his second qualifying day. That decision paid off immediately as the Alabama pro stacked 56-5 on SCORETRACKER® (all largemouth) his second day and eventually advancing to the final round.

Horton caught the majority of his fish flipping a 4-inch Klone Crawsome in Blizzard (green pumpkin with iridescent blue) on a 1-ounce Swampers Tungsten weight and a 5/0 Lazer Trokar Flippin’ Hook. He used a 7-6 heavy Duckett Pro Series rod that he designed and a Team Lew’s Custom Pro reel in 8.3:1 gear ratio.

Thrift caught a mixed back of largemouth and smallmouth throughout the tournament but relied solely on largemouth in the Championship Round. The Damiki pro’s most dependable baits were Texas-rigged 4- and 5-inch Damiki Stingers (watermelon candy and green pumpkin) on a ¼-ounce weight and a 5/0 Berkley Fusion19 Worm Hook. He fished those baits on a 7-0 heavy Fitzgerald Stunner rod and Abu Garcia REVO STX 7.3:1 reel spooled with 17-pound P-Line Tactical Fluorocarbon.

Lee put on a stick worm clinic on Day 1 of the tournament when he flipped up 103 pounds of largemouth on a perch-colored Yamamoto Senko. The Alabama pro also caught fish on a Lucky Craft Gunfish, but the Senko was his key in the tournament, both Texas- and Ned-rigged.

Lucas lived by the principle of “If it ain’t broke, don’t fix it,” leaning heavily on the bait and technique that have helped put him at the top of the food chain in smallmouth tournaments the past couple of years: Drop-shotting a black Berkley PowerBait MaxScent Flat Worm.

It’s probably safe to say that Kelly Jordon had the most fun of any angler in the field on Lake Champlain. The Texas pro caught every one of his Championship Round fish on a single bait: a brown SPRO frog that he finally retired toward the end of the day, after Champlain’s largemouth had worn the paint nearly clean off.

Ehrler caught the majority of his fish drop-shotting a goby-colored Yamamoto Shad Shape Worm and a Roboworm on a No. 1 Gamakatsu Drop-Shot hook and a 3/8-ounce Ark Tungsten Drop-Shot Weight. His drop-shot rig consisted of a 7-1 Daiwa Tatula Elite Brent Ehrler Drop-Shot Rod matched with a 4000-size Daiwa Tatula LT reel loaded with 12-pound Sunline Braid and a Sunline Sniper FC Fluorocarbon leader.